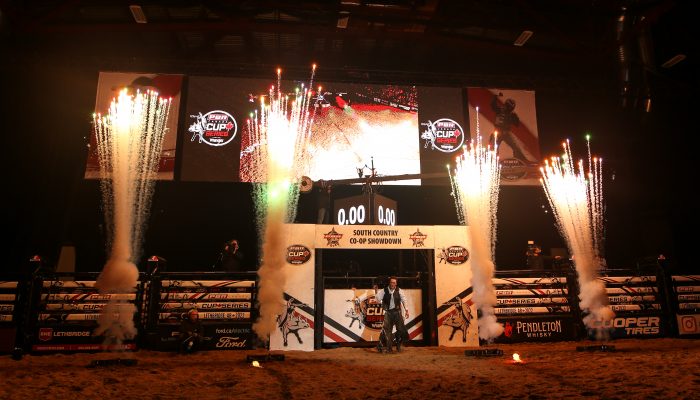 EDMONTON, Alta. – Ahead of the 2022 PBR (Professional Bull Riders) Canada National Finals, presented by Command Tubular Products, in Edmonton, Alberta, on Nov. 11-12, the organization has announced the 21 riders that will compete for the historic $175,000 prize purse and 2022 PBR Canada Championship inside the state-of-the-art Rogers Place.

The contingent of riders anticipated to compete is led by current No. 1 Dakota Buttar, who will be chasing history at the second iteration of the PBR Canada National Finals in Edmonton. Should Buttar conclude the season atop the standings, he would become just the fourth multi-time national champion in history. He previously won the year-end honor in 2020.

Buttar has been a dominant force on Canadian soil in 2022, going a torrid 25-for-50 (50%) throughout the regular season. Additionally, the five-time Glen Keeley Award winner has registered a PBR-best four Touring Pro Division event wins.

Buttar will begin his quest for his second PBR Canada Championship with a 21-point lead over No. 2 Nick Tetz.

Three-time PBR Canada Champion Aaron Roy will travel to Edmonton ranked No. 5, 78 points back from the No. 1 spot, as he chases his unprecedented fourth national title.

Roy has gone 28-for-67 (41.79%) to date on Canadian soil, earning an event win at the elite Cup Series, presented by Wrangler, stop in Grande Prairie, Alberta.

Looking down the Top 10, two-time and reigning PBR Canada Champion Cody Coverchuk will attempt to further etch his name in the record books. Should Coverchuk, who is presently No. 7 in Canada, 101 points back of the lead, make another come-from-behind push to be crowned the 2022 PBR Canada Champion, he would tie Roy for most honors earned by one rider and become the first to win the title in consecutive seasons.

At the 2022 PBR Canada National Finals, two-time Champion Zane Lambert will compete for the last time before embarking on retirement. Lambert is the lone rider in Canadian history to have qualified for and compete at every iteration of the PBR Canada National Finals. He is also the first rider to have won the year-end event multiple times, let alone in back-to-back years, when he dominated the Finals in 2016 and 2017.

The year-end event will also be headlined by two PBR World Champions. Reigning World Champion and 2019 PBR Canada ChampionDaylon Swearingen will return to Canadian soil to defend his National Finals event win. He will be joined by three-time PBR World Champion Silvano Alves, fresh off being crowned an inaugural PBR Team Series Champion as a member of the Nashville Stampede.

The 21 riders that will compete in Edmonton are:

Each rider will attempt one bull each in Round 1 and Round 2 on Friday, November 11, followed by Round 3 on Saturday, November 12. After Round 3, the Top 12 riders will advance to the championship round.

The rider with the highest aggregate score throughout four rounds will win the PBR Canada National Finals event title and a minimum $30,000.

With a maximum 180 points available to one rider, the Top 9 riders in the nation are all in contention for the 2022 PBR Canada Championship.

PBR also announced the Canadian National Finals bullfighters who will take to the dirt to protect the 21 competing bull riders.

Tanner Byrne, Ty Prescott and Brett Monea will be vigilant throughout each 8-second ride or wreck throughout the week. Of note, in 2019, Byrne earned his first selection to work the PBR Canada Finals, becoming the first individual to both ride and cowboy protect at the year-end event.

Tickets for the event are on sale now and start at $30, standard fees may apply. They can be purchased online at Ticketmaster.ca.

PBR (Professional Bull Riders), which has events in five countries, has competed in Canada since 1996 where it operates two tours. Joining the Touring Pro Division (TPD), the Cup Series, presented by Wrangler, debuted in 2016 as the nation’s first cross-country, nationally televised series. For more information on PBR Canada, go to www.pbrcanada.com, or follow on Facebook at www.facebook.com/pbrcanada and Twitter at http://twitter.com/PBRCanada.