A cowboy beef dinner kicks things off at 5:30pm with pony races starting the in arena action at 7pm and the PBR getting underway at 7:30pm. A dance is to follow with “The Prairie Dogs.” Tickets to the event are $25 and are available at the door.

In addition to the $10,000 in added prize money is the trophy buckle for the night’s top bull rider.

Tickets are still available, for more information, contact Justin Volz by phone at 780-871-8634. Let him know who sent you!

Below are my thoughts on the night’s top match-ups and the full draw. Weigh in with your thoughts in a comment at the bottom.

Tyler Thomson vs. Adams Family – I’m not sure how Tyler will like this bull as he’s pretty small, either way though I’m betting on the bull rider. It’ll be a good test for Adam’s Family. According to ProBullStats.com, he’s only been out twice and ridden both times, once being last year in Marwayne by Ty Tescher for an 86.5. More recently and not on PBS was the 86 of Dan Hansen’s in Cold Lake. Look for an 84 here if Thomson weighs the bull down a bit, if 63 has got a lot of try it could be 86 or more.

Garrett Green vs. Boom Boom – This Girletz bull has been ridden 1 of 3 times according to ProBullStats.com and has pretty consistent bull scores. That one score so far was an 83 put up by Brian Hervey last fall in Stavely. I’m thinking this big, cool-looking brahma should get Green to the pay window. My money is on an 84.

Tyler Pankewitz vs. Idiot Proof – This is a rematch from last fall at the Hanna Pro Rodeo. There, Pankewitz was 87 on the left hand spinner. Pank has been doing some good this winter and I’m betting on another 87 on Friday night. With that and a good score in the short go, Pank could be off to Billings, MT next weekend for the Built Ford Tough Series event there as the winner here will get on the alternate list for a chance at the big leagues.

Cody Coverchuk vs. Roy Boy – Scott Schiffner has been on this bull three times and finally got him covered at the start of March in Lethbridge for an 84. Will Cody Coverchuk take three times to cover Roy Boy? Get yourself to Marwayne on Friday night to see what happens.

Justin Lloyd vs. Smoke Ring – This big red and white from Ellie Skori has been one of the mainstays in the PBR in Canada the past few years. He’s been in a ton of short go’s and is now more in the long go but a bull you can consistently get a good score on if you don’t stub your toe. Justin doesn’t make a ton of mistakes so I look for an 84 out of this matchup.

Jesse Torkelson vs. Major League – Wade and Ted Marchand of Vernon, BC raised this bull as far as I know. They bucked him for a few years and he’s looked really good. Now he’s flying under the Flying Four Bucking Bull Co. from Prince Albert, SK. Tork should fit this bull to a T, I think it could be the round. Last time I remember seeing someone win on this brown brockle-faced horned bull it was Cody Moore back in Vernon last spring.

Ty Elliot vs. Lug Nut – Tanner Byrne has got this bull to thank in part for the run he’s been on lately in the PBR’s BFTS. This was the one he rode in the long go in Lethbridge which got him to the finals where he capitalized for the win. Look at Tanner a month later and he’s 17th in the World. Talk about capitalizing on an opportunity. There’s telling Ty Elliot could do the same thing on the white and red spot from the event producing Wild Hoggs. I’m thinking Elliot should be about 84 on this one and get a good bull in the finals.

Again, here’s the draw, add your thoughts in a comment below! 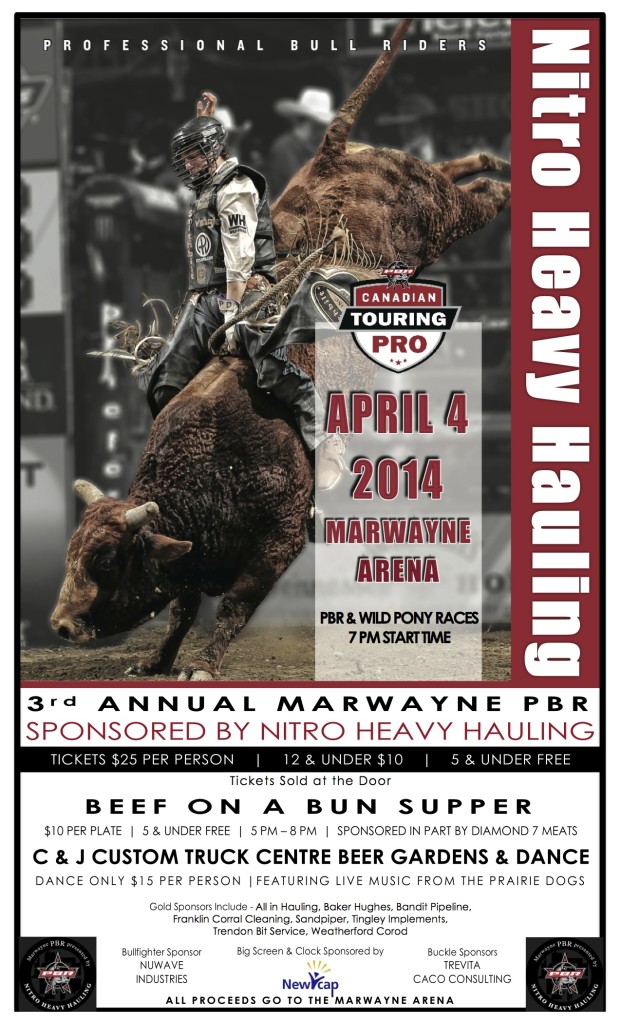