Saskatoon, SK: It’s nearly here. Round One of the PBR Canadian Finals goes at 7:30pm from the Credit Union Center on Friday November 16th. Tickets are still available at ticket master or at the door!

These are some of my thoughts on Friday’s match-ups.

Ty Patten vs. SKRI 10 Smoke Ring – This is a re-match from when Ty rode Smoke Ring in Coronation this summer to finish second there. He was 87 on him and got smacked in the head after. Of course he was alright though and rode the next day even though his eye was swelled up pretty bad. Look for a similar score out of Patten to start things off Friday Night.

Cord McCoy vs. FFR 8 Feed Rite’s Krackin – You’ll probably know Cord from his time of the PBR’s Built Ford Tough Series. If you hadn’t seen him there and still think he looks familiar, you’ve seen him on The Amazing Race with his brother Jet. Rusty Clunie and Ryan & Tanner Byrne will be pumped for this one as Cord should get a great score here that might even be enough to get himself into that ride off.

Tyler Pankewitz vs. PB 822 Norman – Pank is coming off an alright CFR but will be wanting to finish off the year strong in Saskatoon. He’s got to by happy with this draw in Norman as the bull is coming from his good friend Ty Prescott. It’ll be a solid 85 or more if the black brockle face has the same tracks he did in Lloydminster with Cody Moore.

Kody Lostroh vs. HOGS 81 Axis of Evil – 2009 PBR World Champion Kod Lostroh won’t have any trouble with this black horned left spinner. Axis of Evil hasn’t been ridden much, but Andrew Jamison got an 85 on him in August in Coronation. Look for a similar score out of this match-up Friday. Ty Elliot was the last man to attempt the Wild Hoggs short-rounder in Stavely at the Glen Keeley Memorial.

Garrett Green vs. BCR 17 Trained Bear – Warren Weatherly is quite round of this big horned brindle bull. Trained Bear’s name came from Stan as well for those of you who don’t know. John Duffy was telling me the story a while back. According to John, when a bull rider would ask Stan about a bull and what they did, sometime he’d say “I don’t know what he does, he’s not a dam trained bear!” From what I’ve seen of this bull he should turn back to the  left right in the gate. We will see.

Tanner Byrne vs. 2BIT 703 About to Blow – Scott Schiffner became the first man to ride About to Blow back in Lloydminster at the 3D Tour Championship. Tanner may have an advantage here since he ride right handed too. He’s on top of his game too after winning the CFR’s Average Title. Josh and Tamara Berezay have got a great one here. They will be hoping for Tanner to win the round and get a shot at Bucking Fantastic for the Boulet Boots Ride Off.

Ty Pozzobon vs. FD 625 Whisky Hangover – After coming as close as he did to his first Canadian Championship this past weekend in Edmonton, Pozzy will be looking to win everything in Saskatoon. He’s got a shot to as well.  Whisky Hangover will probably fall out the chute and turn back to the right. Ty will ride him all day for probably 85 points or so. It’s a long shot, but Ty could still win the PBR Canadian Title.

Josh Birks vs. B2 889 Wrangler’s Rock of Ages – Josh has been having a great year here in Canada. He hasn’t won any official titles yet until the Finals for the other associations commence over the winter, but it looks like he will. Even though he can’t win the Canadian PBR Title, he could win this event and get himself vaulted right into the PBR’s BFTS starting in New York in January. Wrangler’s Rock of Ages is a perfect draw for round one too for Birks. 85 points is my guess.

Douglas Duncan vs. LZYR 39 China White – Douglas is one of the top guys in the PBR. He won’t have any trouble with this white horned bull with red spots. China White will spin to the left right in the gate and Douglas will probably spur him. Why you might ask? Because he can. This video isn’t of a bull, it’s the song Douglas gets to ride to each weekend wherever in the PBR he might be. Ty Pozzobon and the crew with sound man Marc Stephenson of Monster Sound Co decided on it.

Chad Besplug vs. WV 407 Big Valley Black – Chad’s going to ride Big Valley Black. That’s that. He’s got to if he wants to win the PBR Canadian Championship. Big Valley Black doesn’t get rode all the time but when Chad does on Friday he’s going to get into that Boulet Boots Ride Off. Tonight, he and Tanner Byrne are checking out the Neil Young concert getting prepped.

Zane Lambert vs. 4C 87 High Five – According to ProBullStats.com this bull is also known as Maple Leaf and packed or owned by Jeff Robinson. I’m not totally sure but it looks like he’s been rode 2/5 times for an average of 86 points. This is the kind of bull Zane needs to ride to win his first ever PBR Canadian Championship. Look for a heck of a lot of effort out of Zane as usual. Probably an 86 like the averages work out to be too.

Aaron Roy vs. WV 533 Little Bit of Sugar – We’ve seen this bull around a ton but like Big Valley Black, he doesn’t always get ridden. Compared to the big black horned bull, this smaller red muley isn’t quite as intimidating, or mean either. For Aaron, if he rides him, he will be even tougher to bet for that unprecedented Third PBR Canadian Championship.

Coming to you from the PBR Canadian Finals in Saskatoon, SK for Everything Cowboy and Two Bit Bucking Bulls, I’m Ted Stovin. 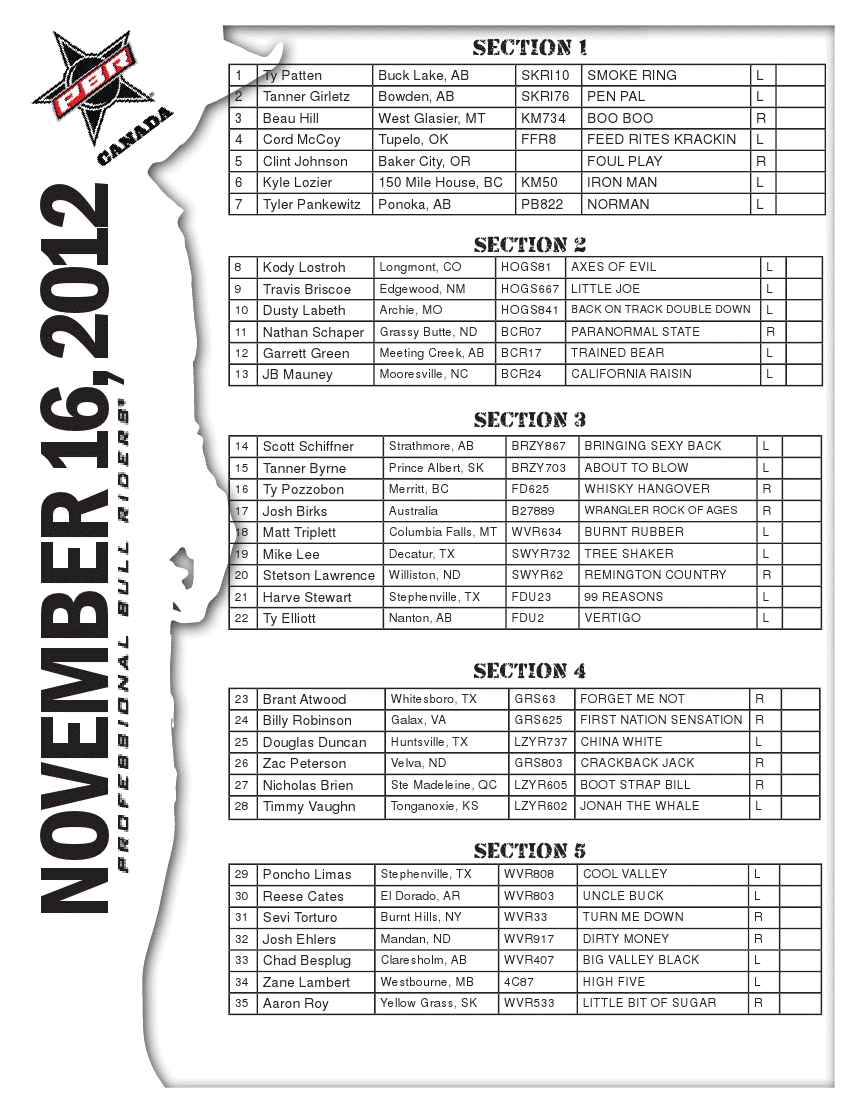