Two Weeks Away from the 2012 Glen Keeley Memorial Bull Riding

Stavely, AB: Last year was the first time I’d ever been to the Glen Keeley Memorial Bull Riding and about the time the Long Go was finished I could tell why the committee there had won the PBR Canada Event of the year nearly every if not every time since 2006.

I could go on further and try to explain to you as to why this might be but I’d rather let this video from Juxtapose productions and the Hell on Hooves TV show to the talking.

This video is about 15 minutes long and is the bulk of Episode Eight of the Fourth Season of Hell on Hooves. It explains the entire quest of last year’s winner Tanner Girletz on his way to winning his Third Glen Keeley Memorial title.

Any time that you get the chance to watch this video you should take it. It’ll probably change your day or even week or maybe more too.

September first is when this year’s Glen Keeley Memorial Bull Riding will take place. 7:00pm is when the bull riding action will get underway however that’s not the only thing that will be going on. A dance will follow at the Stavely Community Center and a Steak Dinner will be served at 5:00pm prior to it for $7 a person. Tickets for the bull riding at $25 and are available at Cowboy Country Clothing in Nanton, Frontier Western Shop in Chlaresholm along with the Stavely Town Office or Hotel.

A bucking bull futurity and junior bull riding will be held Friday August 31st at 7:30pm. Beef on a bun will be served during the calcutta starting at 5:30pm at the Stavely Hotel.

For more on this year’s festivities check out www.GlenKeeleyMemorial.com

You can also see the story from last year here on Everything Cowboy by following this link:

There’s more on the Futurity from last year here:

If there’s only one bull riding you make it to all year, it should be this one. Get your tickets fast as they are likely to be all gone before you know it. 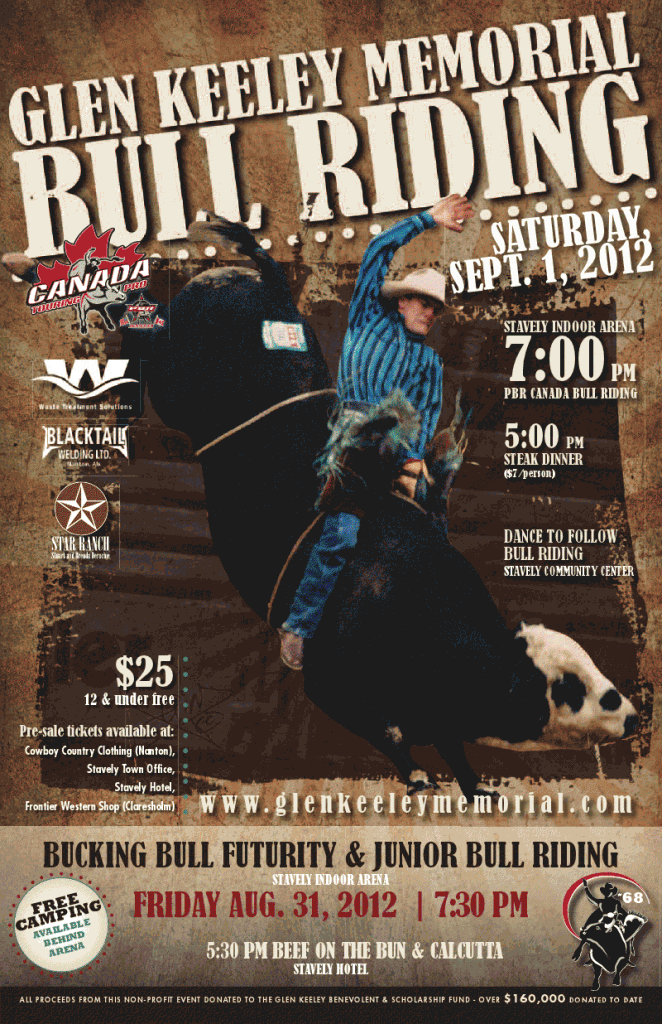