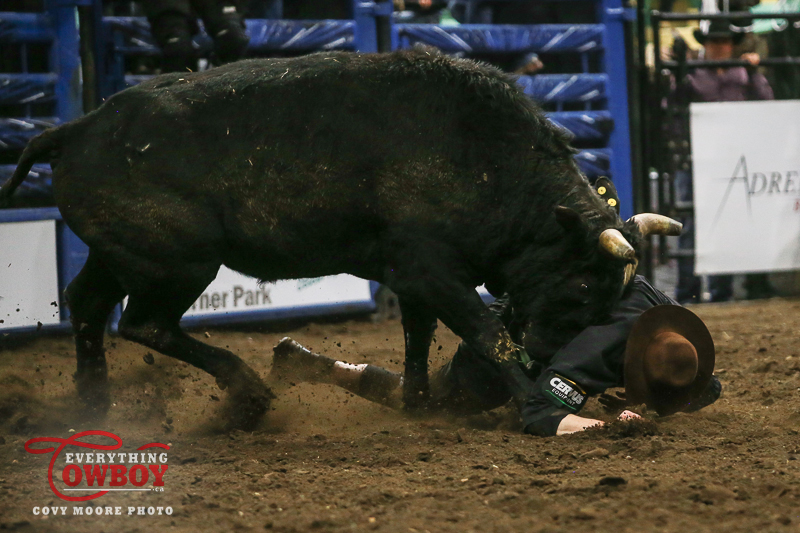 Those that were in attendance at the first ever Bullfighter’s Only bull fight on Canadian soil in Red Deer last weekend will recall that regular bullfighter Scott Waye called his fight short after being run over.

Those who were really paying attention would notice that the CPRA mainstay fighter did not return for the rest of the event as originally scheduled. 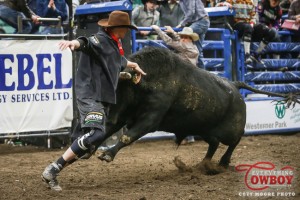 Scott Waye fights a bull during the inaugural Bullfighter’s Only event on Canadian soil in Red Deer.

“The Bullfighters Only deal was pretty innocent,” said Waye.  “I had a young bull push me out. I tried to go the other way, but he caught me out and scooped me infront of him. He ran over my back. I had everything gathered up and was ready to go, but as soon as he ran over my back I knew I wrecked my shoulder out.”

“I called the fight and went to the dressing room for the night.”

Having had his shoulder dislocated before, he thought that was the extent of the injuries until he got behind the chutes and realized there was a lot more wrong.

“Posterior dislocation of the shoulder, and shattered it. I got 13 screws, a plate and one washer inserted into my shoulder,” he said. 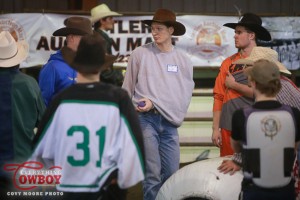 Scott Waye, despite injuries, still attended and taught at his bullfighting school in Stettler AB February 27.

Despite some rather serious injuries, Waye is taking care of things and will know in the next couple days what the recovering time will look like.

“If it’s going good, we will be rehabbing in three to four weeks. If it’s not going good, they will have to cut me again and make sure the shards are staying in place,” Waye said. “It will either go from 3-6 months, to two months. We will see.”

Injuries are nothing new to the rodeo game, and bullfighting is no exception. Waye says that this wreck ranks up top with some of the worst he has sustained in his career.

“It is up there. Especially cause of my age. I haven’t been hurt real bad in quite a few years. I got over the sophmore jitters and everything. I feel I have been fighting bulls really well the past couple years, so the injuries have really lessened,” said Waye.

“If you fight bulls, you are going to get injured.”