Manor, SK: “Once you see the arena, you’ll see it’s about the closest you’ll ever get to the bull riding.” Said Andy Robertson this afternoon over the phone. “Generally it’s a pretty packed crowd, especially if the guys are riding good too.” 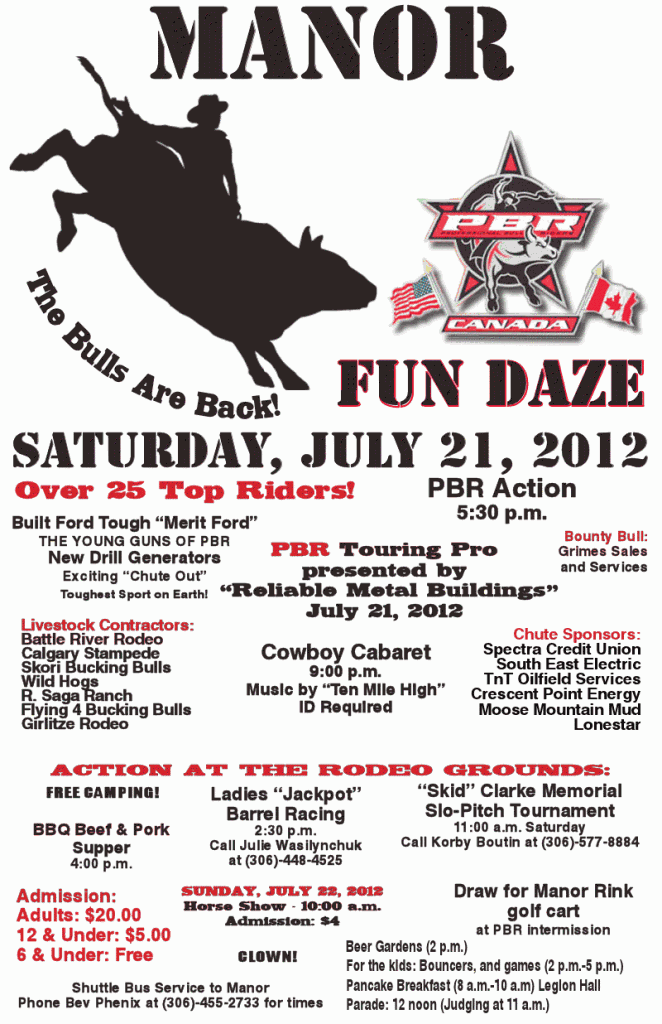 For someone who’s never been to the Manor Fun Daze before, after hearing that it should be enough to convince you to get yourself there this Saturday.

What started out as a rodeo in the early 80’s according to Andy, turned itself into a PBR Canada Touring Pro Event in 2007. Zane Lambert would be the Champion for the first two years.

These small town rural events are the best ones we ever get to. You can feel the heart of the community right there cheering you on.

“It’s always been an Oil & Gas community. Now in the last five years its really been taking off.” Robertson added. “There is lots of farming and agriculture as well as ranching in the area too.”

The small towns usually have the best food too. Manor will be no exception with a BBQ Beer & BBQ Pork Supper starting at 4:00pm. If you’re a bit thirsty and would like to check out some Barrel Racing in the afternoon, the Beer Gardens open up at 2:00pm.

By 5:30pm you’ll be ready for the best Professional Bull Riding action in Southeast Saskatchewan.

25 of Canada’s Top Bull Riders as well as all of the Top Riders on the 2012 SIGA 3D Bullriding Tour will be in attendance. Some competing include recent $100,000 Calgary Stampede Champ Chad Besplug and Saskatchewan local & Calgary Stampede runner up Aaron Roy who took over $40,000 home from Calgary this past Sunday.

It all takes place at the Manor Fair Grounds this Saturday July 21st.

As the fourth stop on the 2012 SIGA 3D Bullriding Tour, each ride still qualified will be there in order to keep their spot to win the Ford F-150 Truck. They will also be vying for their share of the $7,000 in added prize money.

One rider will also have a shot at a bounty bull yet to be named for an extra $1,000.

The top rider in the 3D Tour Standings according to money won at the end of the year will be awarded an extra $5,000 bonus. The rider who finishes the best in Lloydminster, SK at the 3D Tour Finale will drive home the truck.

At the Manor Fun Daze, a horse show and slow pitch tournament will take place. After the evening of bull riding, for those of you sticking around, there will be a live band playing in the beer gardens by the name of “Ten Mile High.”

Like many other events, the Manor Fun Daze would not take place without it’s great sponsors! Thank you to the sponsors for making it happen each and every year!

Until Saturday, here are the updated 3D Bullriding Tour Standings Presented by SIGA.

See you in Manor Saturday!