Wanham, AB: 2012 could very well be the Year of Kyle Lozier. He’s already first in the CPRA Standings and now leads the PBR in Canada as well. Just as Brett Gardiner said, he’s always been on the brink of a being one of the Top 10 bullriders in Canada. At this point he’s not only in that Top 10, he’s first.

All this because of his $20,000 win last night at the Wanham PBR on the Vold Bull Slash. It may have been the highlight of the night but Kyle took a long road on his way to even getting the shot at Slash for the gigantic bonus. There were 24 other men after that shot as well.

Wacey Finkbeiner started it out on Day Two with this effort on the Scissons Bull Hot Wired.

Kyle Lozier ended up getting on eight bulls while in Wanham. His fourth one was a Girletz bull they call Gambler.

As the next rider after Ty, Beau Hill took on the Scissons Bull Squirrel.

Chad Besplug keeps on riding more than half of the bulls he attempts. He rode the Nate Gardner bull being hauled by Curtis Sawyer called Bet on Dueces.

Todd Braithwaite has a bull called Regulator’s Northern Lights that’s not an easy one to get by. The chute might be the toughest place to be around him. Scott Schiffner managed to get out on him after a few attempts in Friday and get himself back to the Short Round. Jesse Torkelson got out on him but didn’t fare as well as Scott did in the arena.

Tanner Girletz was one of the last men to ride in the Long Round.  Nate Gardner provided his mount as well, Black Label.

At the end of the Long Go. This is how the standings looked.

The Short Round gave these top riders one more chance to make their way to the top of the event to get to face Slash for the bonus money.

Things got going with Tyler Pankewitz on the bull Kyle Lozier rode to win Friday Night’s Short Round. Vold’s Turn Me Down.

Curtis Sawyer’s Nedley Mandingo has only been ridden thus far by Tyler Pankewitz. He won the event over in Abbotsford, BC on him with an 89 point score. Zane Lambert nearly did the same thing.

One of only three bulls selected to be at the 2011 PBR World Finals, First Nation Sensation owned by the Girletz Family as well as PBR Secretary Nikki Phipps, was matched up with 2011 Canadian Champion Chad Besplug. He showed in the first round that he could ride him. Unfortunately is wasn’t for long enough today.

Coming into the Short Round in the middle of the pack with a decent score, Tanner Girletz needed a real good score to pass Kyle Lozier in the standings to get the shot at Slash. He had the bull to do it too.  Vold’s red muley whip down specialist, Little Bit of Sugar.

Kyle Lozier was already in the lead from the night before but was entered four times in total. He was in it to win every place he could. On his final try to win more money in the bull riding he got on the Sawyer Bull Rumble Seat.

In the Short Round of the Aaron Roy Invitational, the event’s name sake rode Braithwaite’s Jackson James for an 89.5 point score.  Roy needed only an 84 to overtake Lozier to win the event. This time Roy came up short.

With that, Kyle Lozier would be the man to take on Slash.
Lozier made Canadian Bull Riding History tonight in Wanham Alberta. He rode the infamous bucking bull Slash owned by Duane Robinson and Nanson Vold for a $20,000 bonus check.Check out that monumental ride right here:

As the event’s champion Kyle got to take on Slash for the bonus. He’d already won himself at least $7,000 for that win before he even nodded his head for the bonus ride. 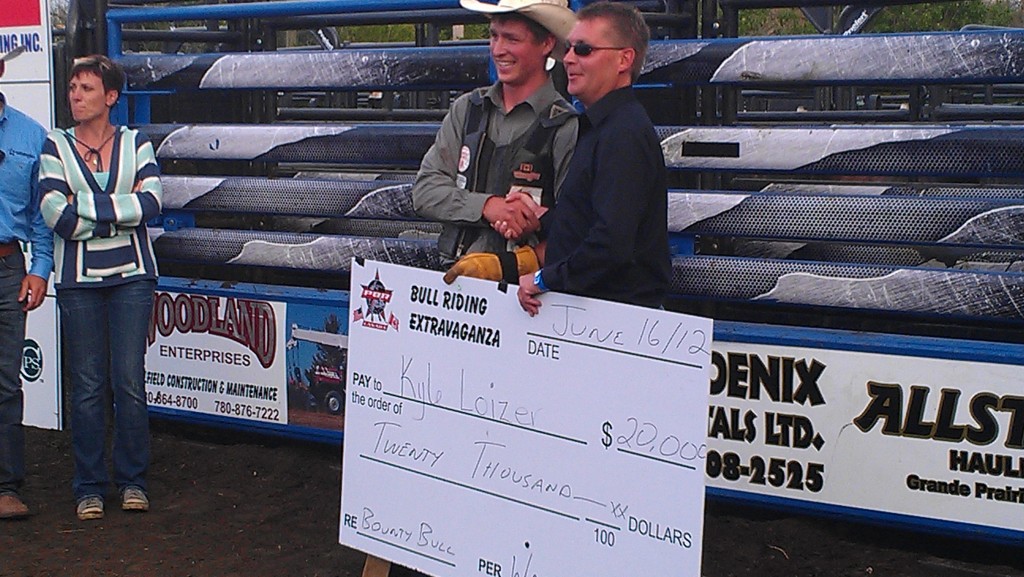 Kyle Lozier being presented his $20,000 check for riding Slash in Wanham, AB

For the amount of bulls he attempted for the weekend, he earned every penny. Kyle re-entered both nights. By the time he hit the ground and got the thumbs up he’d been on eight bulls in Wanham alone.

He had this to say about the win tonight.

For one of the nicest bull riders in all of Canada or for that matter, anywhere, it’s a win that every single person there was happy to see.

Thank you to everyone for making the Wanham PBR such a great success once again. Now you know why Wanham was chosen as the 2011 PBR Canada Event of the Year. We look forward to it already again next year.

June 16th, 2012 will be a year Kyle Lozier, Slash, and the Small Northern Alberta Farming Community of Wanham will not soon forget.

With this win as well, Lozier will join the rest of the Canadians on the PBR’s Built Ford Tough Series. Might as well add another one up there thanks to 3D Bullriding!

Stop #4 of the 2012 3D Bullriding Tour Presented by SIGA will take place Saturday July 21st. See you there.