“It must be the mustache.” – Aaron Roy

Billings, MT: There was more Canadian Content this weekend in Billings at the PBR’s Built Ford Tough Series event there. A couple of Canadian Bulls were out yesterday. Three bull riders including Chad Besplug, Dusty Ephrom and Aaron Roy. Two Canadian Judges were part of the event as well with both Ryan Byrne and Chad Pighin there this past weekend. I think that Justin Keeley may have even been there as well. You can’t forget Ryan’s son, bull fighter Jesse Byrne as well.

After Saturday night’s performance, Aaron Roy was sitting in third place overall at the event. Leah Garcia was able to catch up with him.

Aaron didn’t have any luck on Sunday and finished up the event in 15th place. Dusty Ephrom finished not far behind at 18th. Chad Besplug did not make the whistle on any of his bulls.

Ty Pozzobon and his mustache return to competition next weekend in Boise, Idaho.

After that interview, Aaron may be in the running for this medal on the right. 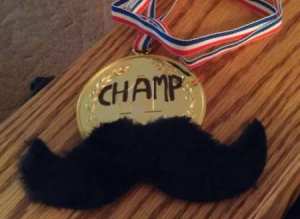 It will be given to one of the top three people that get the most votes on their picture on the Everything Cowboy Facebook Page.

To submit your picture for the contest follow these directions below.

The contest will end May 28th with the prize being awarded as soon as possible after.

A custom made championship prize will be awarded to the winner as well ($109.00 value.)

Best of luck to everyone!