Back to Back Buckles in Merritt for Outlaw

MERRITT, British Columbia — “Ladies and Gentlemen, the fire marshall has asked that all of you please squish together more in order to not block the stairways in the grandstand,” announcer Joe Braniff told over the loudspeakers preceding the second annual Ty Pozzobon Invitational PBR on Saturday Night in Merritt.

The crowd of 3,000 plus squeezed together a bit more as they had already been asked to cozy up to their neighbors once before. For a community the size of Merritt, I’m pretty sure the doors in the rest of town were closed and everyone was at the rodeo grounds for the show. With the event starting at five, people were lined up to get the best seats starting at about 3:00pm, by 4:00pm those announcements were already being made.

When the show started the great bull rides started pouring in and the crowd loved it.

Last year’s champ, Chase Outlaw of Hamburg, Arkansas took the early lead with his 85.5 on Devil’s Double from the Coyote Creek Cattle Co.

Not long after that Josh Birks rode the not very often tamed Lost Wages from the Wild Hoggs to overtake the lead at the time, even though according to the scores we first received we thought it was Outlaw out front. Things sometimes change when the scores are tabulated.

Next, Kiwi Cowboy Adam Jamison made good on my pick with his 87 to tie for the lead on on 2 Dark 2 C also from the Wild Hoggs.

Tyler Pankewitz made good on another pick with his 86.5 on State Trooper from the Franklin Rodeo Company.

Harve Stewart made a great ride on Super Too from Franklin Rodeo for an 89 which ended up winning the long go.

Hometown cowboy and namesake of the event, Ty Pozzobon would end up getting a re-ride on his first bull then coming down before the whistle. As the true champion he is, Ty helped at the intermission with the sheep riding in the very arena he started his entire rodeo career.

With that, the short round would be next.

With the bull power as good or better than any short round in Canada, only one man would make the eight second whistle. The high marked bull of the event went to Cosa Nostra from Franklin Rodeo with a score of 46 points up against Josh Birks.

With that only ride in the finals, Chase Outlaw is now the two-time and only champion of the Ty Pozzobon Invitational.

“I couldn’t have asked for anything better, come out here to Merritt, BC and the weather is just beautiful, couldn’t ask for a better day to ride bulls,” said Outlaw, who rode Team Paige from Kelly Armstrong of the Franklin Rodeo Company for the win. Team Paige was the only bull that bucked Chase off last year in Merritt.

The win at his friend’s event is a big one, one worth travelling a long ways for.

“To be the only person to have this belt buckle, I mean not so much with Ty Pozzobon’s name on it but heck,” Outlaw joked. “You never know, maybe next year I’ll get three of ’em. Maybe start me a collage of Pozzobon belt buckles.”

Saturday’s bull rides were the first two bulls back for Outlaw as he tore his groin and cartilage in his hip in Fresno at the PBR’s Built Ford Tough Series event there this spring.

“To not get on a bull in over two months and come back crack em like this it fires me up pretty good. Gets that hair standings up on the back of your neck.”

“Looks like I cam back at just the right time,” concluded Outlaw.

Next up on the PBR Canada schedule is the co-sanctioned Dusty Gilko Bull Riding Challenge in Belt, MT on Saturday June 7th. Following Belt is the Wanham Bull Riding Extravaganza in Wanham, AB and the Bismark, ND Touring Pro Division Event both on June 13th & 14th. 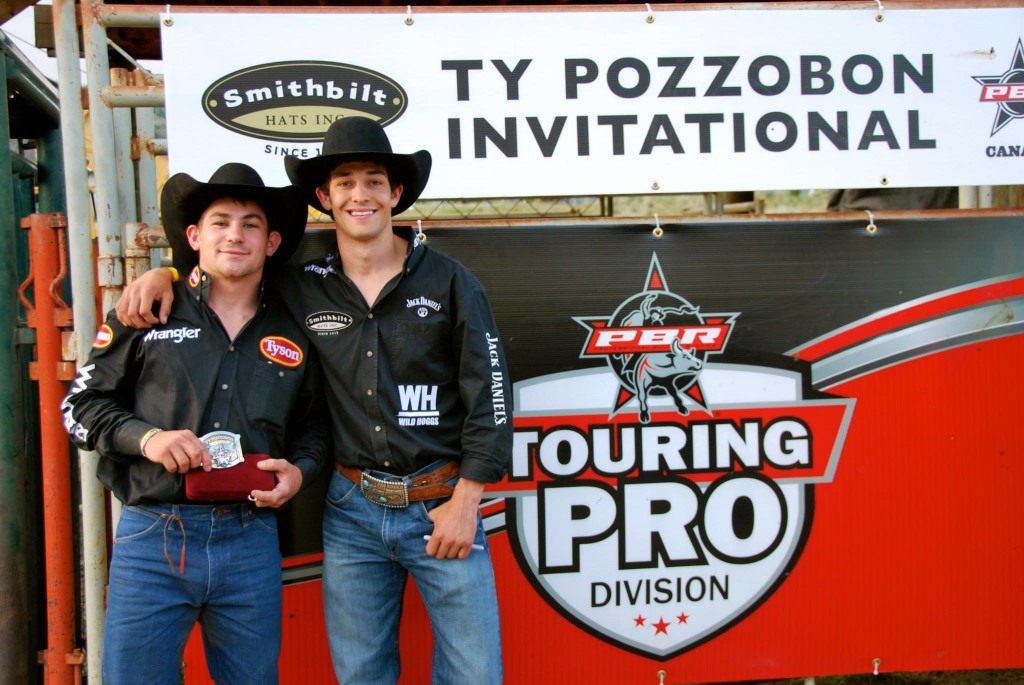 Ty Pozzobon presents event winner Chase OUtlaw with his trophy buckle for winning the 2nd Annual Ty Pozzobon Invitational. May 31st, 2014 in Merritt, BC. Photo by Gail Joe/Focus In Photography.

Unofficial Results from the 2nd Annual Ty Pozzobon Invitational. May 31st, 2014 in Merritt, BC.

Visit PBRCanada.com for further information on the PBR in Canada as well as the most up-to-date standings and schedule.

Thanks again to the fantastic event committee in Merritt for your hospitality and putting your efforts into every detail in making this event the best it can be. A huge thank you goes out to the Pozzobon family in Amy, Leanne, Ty and Luke along with Fred and Carol Lowe, Ty and Amy’s Grandparents, as well as Gail Joe of Focus In Photography for the pictures!

The organizing committee for the Ty Pozzobon Invitational. Photo by Gail Joe/Focus In Photography.

We are all looking forward to coming back once again in 2015 for the Third Annual Ty Pozzobon Invitational!