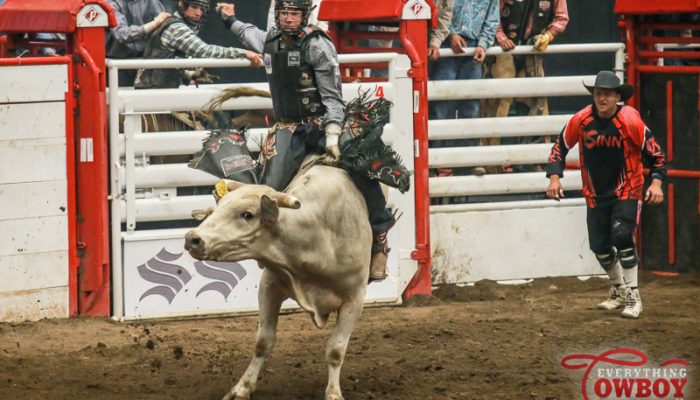 With only a few weeks to manage the organization of the Global Petroleum Show PBR earlier this month at the Agrium Centre in Calgary, Cody Snyder and his Bullbustin’ Inc. group pulled together a great show.

“The event was a massive success considering we had less than 6 weeks to put it together,” said Snyder.

“We rounded up a title sponsor and 6 others in a very short time frame, had about 1,000 attend and raised a bunch of money for charity. We are already in the planning stages for next year.”

Two charities benefitted from the event, raises a total of $10,000 for the Ronald McDonald House Southern Alberta and $13,000 Fort McMurray’s United Way.


“It means the world to Rhonda and I to be able to help out people and organizations in need and to give back to the communities where we are involved. We have an opportunity to create a platform to bring awareness and money to various charitable organizations. We have been producing charity related fund raising events from the day we started producing events over 20 years ago. From the Ranchmans Charity Bullbustin which has raised over $1.5 million in 16 years, the Sheldon Kennedy Child Advocacy Center Invitational Bullbustin which has raised over $165,000 for the center in 2 short years to the Swift Current PBR Invitational event that raises money for the Swift Current Broncos players endowment fund to now the GPS PBR Invitational that raised money for people devastated by the Fort MacMurray fires.”

As for the success of the event itself, and Bullbustin’ Inc organizing the event moving forward, Snyder said they are excited for the future of the GPS PBR.

“People loved it. It was an Oil & Gas function, which we are part of with our ownership in Big Bear Energy Services an Oil & Gas service company. The two go hand in hand as Oil & Gas Exploration is a risk reward venture and bull riding is a risk reward sport. We already have committement from 6 sponsors for next year which shows the caliber of event it was.”

As for the winner, Cody Coverchuk who overcame vehicle issues en-route to the event to ride two and take the win, CFR arena record holder Snyder said he is impressed.

“In my opinion Cody Coverchuk is the real deal. I was talking to him after the event and we recalled how much success he has had at our events. He won Swift Current a couple years ago and has consistently won at our Calgary events. I believe if he got on the trail and got going in the US he could have a lot of success. He tries really hard and I really like how he kicks his feet loose, which is a huge asset to riding rank bulls.”