First Leschyshyn PBR is a Tremendous Success with Clark Win

Langham, SK: Two solid rides get Brendon Clark the “win he’s been looking to get for the past two months” as he said after winning the first ever Curtis Leschyshyn PBR Invitational on August 16th, 2012.

The town of Langham had never had their own bull riding. That was until Curtis Leschyshyn and 3D Bullriding’s Jason Davidson threw an idea back and forth which materialized into the event which took place last night.

It’s amazing what can become from a simple idea. Thank you to everyone for making it happen. We sure hope that all of the desired outcomes for it have become a reality. It sure looked great to see every single seat filled along with an overflowing beer gardens.

Eno/Kubinchak’s 822 TJ has been very good in the past two weeks of bull riding. As only a four year old, the paint looking bull is making some waves. From Wednesday’s hometown Coronation Royal Rumbull where he threw off PBR Star Brendon Clark in the Short Go to the 45 point out in Eatonia a week ago, he’s one you’ll want to watch out for. Kyle Lozier is about to make his Built Ford Tough series debut tonight. Hopefully he isn’t too sore after this mishap last night.

Cody Moore got in a wreck not long ago and has stitches directly in and around his armpit. Stitches that would probably be painful for anyone else to move their arm with. Cody has been riding bulls with them and riding well one could add. He made a valliant effort on Skori’s Black White Faced bull Pen Pal in the long go.

2007 PBR Canadian Champion Tyler Pankewitz was next to go, he took on Ellie Skori’s new bull EW’s Bonness and took the long round lead with an 83.

Sweet Emotion is a new bull from the Calgary Stampede that’s yet to be ridden. For a young bull that isn’t often a big deal, however he’s thrown off some of the best riders in the game at this point. Skyler McBride was his next victim last night in Langham.

Two Time and possibly soon to be Three Time PBR Canadian Champion Aaron Roy took on the Calgary Stampede bull named after this very site. Roy and Everything Cowboy matched up for what in my opinion was a low 83 point score but still took a share of the lead with Tyler Pankewitz.

Ty Pozzobon matched up with the newly acquired Two Bit bull from Lorne High that kept his name of Bringing Sexy Back.  Short work was made of Pozzobon. Look out for Bringing Sexy Back this October in Las Vegas at the ABBI Classic World Finals he will most likely be in the money.

Youngster Cody Coverchuk took on a young Two Bit bull that was really impressive last night and has been at lower levels up to this point. Danger Ranger is a pretty tame looking hereford looking bull that bucks hard. Cody was on his way to the lead in the long go but came up short.

After a disappointing buck off in Wednesday night’s Short Go, Brendon Clark wasn’t leaving Canada empty handed. His wife had seen some video of his bull and thought he should be able to ride him. It’s one that the bull riders love to draw. It’s one I even rode back in Odessa, TX in 2009 when he was still owned by Dickie Williams. Monkey Bones is now owned by Two Bit Bucking Bulls of McGrath, AB.

Zane Lambert nearly made the whistle on Girletz’s Forget me Not. Zane is 30th in the qualifying standings and about $6,000 away from getting himself a spot on the tour. With not many events left, we will see what happens and if he makes his way back to the World Finals.

Beau Hill made a solid ride on Black Chicago then got absolutely pummeled on the dismount.

On a re-ride, Jordan Hansen took on the little Wild Hoggs spinner co-owned by Ty Pozzobon and managed to stick to him for an 81.

With that, the scene was set for the Short Go. You could feel the tension and excitement in the air. 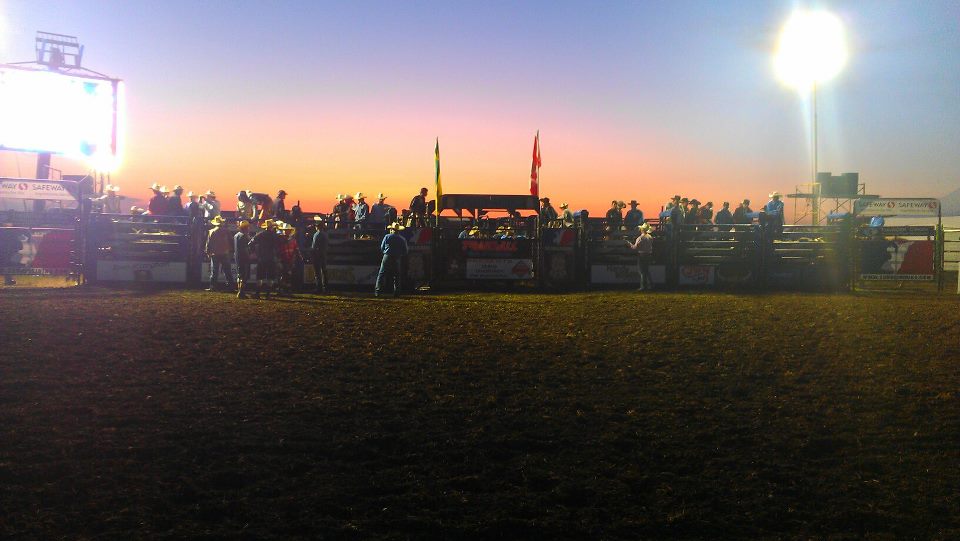 Tanner Byrne fresh of a BFTS debut, took on Little Joe to start things off, a bull he’s ridden to an 88 point score before.

Cody Coverchuk went next but didn’t make it past the direction change on Tow Bit’s Bucking Fantastic.

Diego of the Girletz’s has been a great bull for a good a long time. It looks like he keeps getting better too. Cody Moore nearly rode him last night for a big score. Another second on each ride combined would have made Cody’s night much different.

Strathmore’s Scott Schiffner probably couldn’t have liked his short round draw much more. All of Scott’s traveling partner’s had ridden this bull up to this point. He joined them and made his way to the lead of the event.

Flying Four’s Krackin’ has been a great bull for the past few years. The big brindle made it tough for Stetson Lawrence to make the whistle.

Jordan Hansen has been on a roll as of late and matched up in last night’s Short Go with 701 Foul Play. Hansen made a solid effort but didn’t get as far as he needed to. For how difficult Foul Play is to ride, Jordan made it further than most have lately.

In Lashburn, Jordan Hansen rode the Wild Hoggs bull Back on Track Double Down for an 85.5. Brendon Clark didn’t know the bull but that didn’t matter.

For Beau Hill not to get hurt and be able to get on Jackson James in the Short Go was quite amazing. Even though he didn’t make the whistle you’ve got to give Beau props for getting on another one after the wreck he got in on Black Chicago.

Calgary Stampede’s best bull today is most likely Beaver. Of course it’s a matter of opinion, so mine is that this bull has been great every single time since Prince Albert this spring. No one has really come close to riding him either. That was until Aaron Roy nearly got there last night. How many points do you think he would have been?

Coming in with the lead and drawing a bull that could get him the win, Tyler Pankewitz  needed only about an 85 on Pawn Star to get the 3D Bullriding Tour Ring. Unfortunately Pank came up short and hit hard. After the event Tyler was in some serious pain, he said before they left that he was having a little trouble breathing. On the way home he had to stop in at the Camrose Hospital. It was a good thing they did as his spleen was ruptured. He had surgery today and I’m waiting on an update on how he’s now doing. From what we talked about today, he will be out for at least six weeks but would be expected to probably sit out until the CFR in November.

With that, Brendon Clark was our event champion. He had a lot to say about the win. Hopefully this will propel him back into the BFTS.

That’s it for stop number eight on the 2012 SIGA 3D Bullriding Tour. The finale is September 29th in Lloydminster, AB where one of 17 bull riders will drive himself home a new truck. Who’s it going to be?

From the first ever Curtis Leschyshyn PBR Invitational in Langham, SK for Everything Cowboy and 3D Bullriding, I’m Ted Stovin.