Langham, SK: There seems to be a connection getting stronger and stronger between the National Hockey League and the Professional Bull Riders here in Canada in the past few months. With Wayne Gretzky getting into the Back Seat Buckers earlier this year, it may have started something. Even if it didn’t we’ve been seeing many NHL players behind the chutes lately. 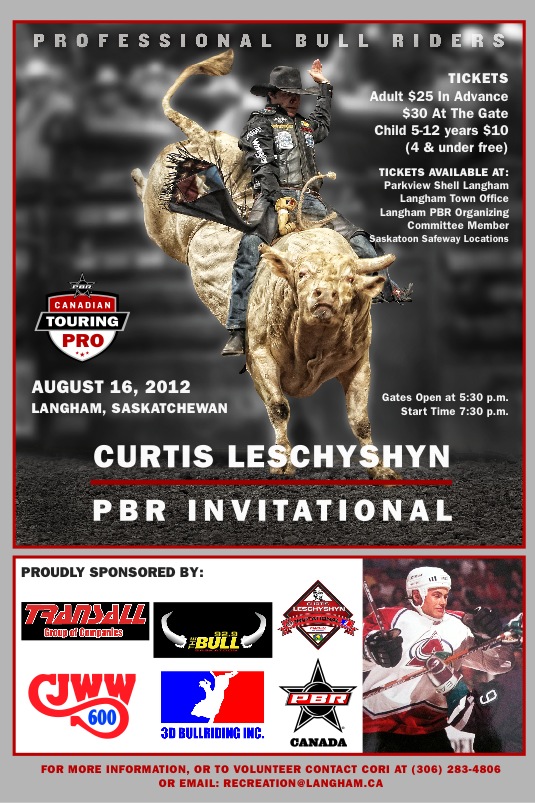 Just ask Tanner Girletz who helped him on a few times this year at the Calgary Stampede. You’ll all remember his World Junior moments that will forever go down in history as some of the greatest of all time, Jordan Eberle now of the Edmonton Oilers.

In the same week, Brayden Schenn of the Philadephia Flyers and Carter Ashton of the Tornoto Maple Leafs both could be seen behind the red and white Calgary chutes wearing their Brian Hanson custom shaped Smithbilt Hats courtesy of Jason Davidson.

Curtis Glencross of the Calgary Flames is another we’ve seen around a ton that’ll always be glad to help a guy on. He’s got his own event coming up on the 24th in Innisfail, AB. At July 11th’s Kinsella, AB PBR, 2012 Stanley Cup Champion Coach Darryl Sutter too the time for a few words with us too.

Of all of the previously mentioned names have nothing on the sport of bull riding as does Langham, SK native Curtis Leschyshyn. About three years ago Leschyshyn, got himself involved in the sport for the first time since watching it as a kid in Saskatchewan. Bucking bulls were his way into the sport he has a great passion for now.

Twenty minutes outside of Saskatoon in Lanham will play host to the first ever Curtis Leschyshyn Invitational PBR. It will also be stop number seven of the 2012 SIGA 3D Bullriding Tour. The last event before the September 29th Finale where the Ford F-150 SIGA Truck will be given away along with a $5,000 bonus given to the rider earning the most money throughout the Tour. Currently led by Aaron Roy.

$10,000 in added prize money will be paid out to the top 30 bull riders in Canada that will face the top bull pen ever assembled in Langham. It’ll likely be a preview of what you’ll see at this year’s PBR Canadian National Finals in Saskatoon this November.

Curtis was present to help Jason Davidson of 3D Bullriding to chute boss the event. You’ll be able to see him doing the same this Thursday night. He had this to say this past Friday in Lashburn about the event and the sport in general.

You can get them from any Langham PBR Organizing Committee Member, the Parkview Shell in Langham, the Langham Town Office, or a number of Saskatoon Safeway Locations.

For more information or to volunteer, contact Cori at 306-283-4806 or by email at recreation@langham.ca