Tanner Byrne is tonight’s champ at the Kinsella Graveldome Bullarama. He also won the July PBR Canada Built Ford Tough Series Incentive. He will make his way to the Tulsa, OK Event early in August.

Kinsella, AB: Hot summer nights sure make for some great bull ridings. Tonight was no exception. The Kinsella Bullarama Committee put together an outstanding event once again. Since missing the event last year, it was great to see so many new things involved with the event.

One that Announcer Doug Young sure appreciated was the Denmax Announcer’s booth. It sure gives Doug a unique perspective and the ability to see exactly whats going on in each chute as the event transpires. It would be handy to keep him out of the rain if it were to happen too. This time around it was some great shade from the heat.

As the first qualified ride, Josh Birks made this 79 point ride on the Lazy R Bull White Roan to start things off after a bit of a rough start.

As just the tenth man out of the gates, Dan Hansen made this solid ride on the spinning Girletz Bull Big Easy.

Australia’s Ty Parkinson took on a bull raised by Dale Bala now packed by the Wild Hoggs by the name of 77 Northern Chill. Ty Elliot won the Long Go on Northern Chill on Friday in Edgerton with an 85.5. Ty didn’t fare nearly as well.

To start off the second half of the night, Miles Pennington got himself a decent score on the newly acquired Sawyer Bull Chains that came from the Schellenberg’s.

On his second bull of the night as a re-entry, Tanner Byrne took on Nate Gardner’s 148 Bet on Dueces that Curtis Sawyer packs for Nate.

Cody Moore took on the big black and blue bull 732 Zack Wilde. Do you think he could have been a couple more than 82.5 points?

Tanner Girletz matched up with his own families bull Forget Me Not. He got a bit too far in there and then smacked his head.

As the final rider out in the Long Go, Two Time CIRA Champ, Armando Davila Rodriguez took second when the dust settled after this 83.5 point ride on the Girletz Bull 608 Johnny Be Good.

This is how things stacked up after the Long Go:

Ellie Skori couldn’t have put together a more even set of bulls for the entire event. It sure showed with how many rides there were in the Short Go too.

Tanner Girletz  started it off on the Flying High Bull I’m a Trouble Maker.

This week, Josh Birks made his way over to the PBR scene after a fantastic spring in Canada. Here he is on Sawyer’s Sweat and Regret to take the overall lead.

Bar UT Bucking Bulls’ 39 Ring My Bell too Jason Finkbeiner to a long round win in Lethbridge back this spring. Jesse Torkelson had some trouble getting out on him but when he finally did, it was worth the wait.

Flying Four’s #8 Krackin’ has been in darn near every PBR Canada Event’s Short Go this year thus far. Cody Moore had been on him before and come up short. He made it count this time to overtake Josh Birks for the lead.

Eno/Kubinchak’s 341 Unabomber will be retired at the end of 2012. He’s been one of the greatest bulls ever from Canada. Tanner Byrne had matched up with him two times before and come down early. Today was really a “perfect day” as was said by he and Rusty Clunie on the way back to Calgary last night. You can see a bit of why by watching this ride.

Even though it isn’t paid out money wise, these are the short round scores.

What the PBR does pay a lot of money out in is the average. Here’s the average money added in with what each rider made in the Long Go for the total payoff. Thanks to Lori Eno for having this for us right after the event to share this morning!

Tanner and I were able to catch up after his big win and news of his incentive win to where he will make his way to his first ever PBR BFTS Event in Tulsa, OK in August.

Another person I had the great opportunity to talk to last night was 2012 Stanley Cup Champion Coach Darryl Sutter who grew up and still lives not too far from Kinsella. In this interview he says we only missed the cup by a week! Thanks again Darryl. I sure appreciate your time for this interview!

That’s a wrap fro this year’s Kinsella Graveldome Bullarama. It’s one event I sure appreciated coming to every year as a rider. It was even better to be able to watch and tell you all this story. I look forward to being back next year riding.
You know you are always welcome here and sure feel it. Thanks again for having us all Kinsella! 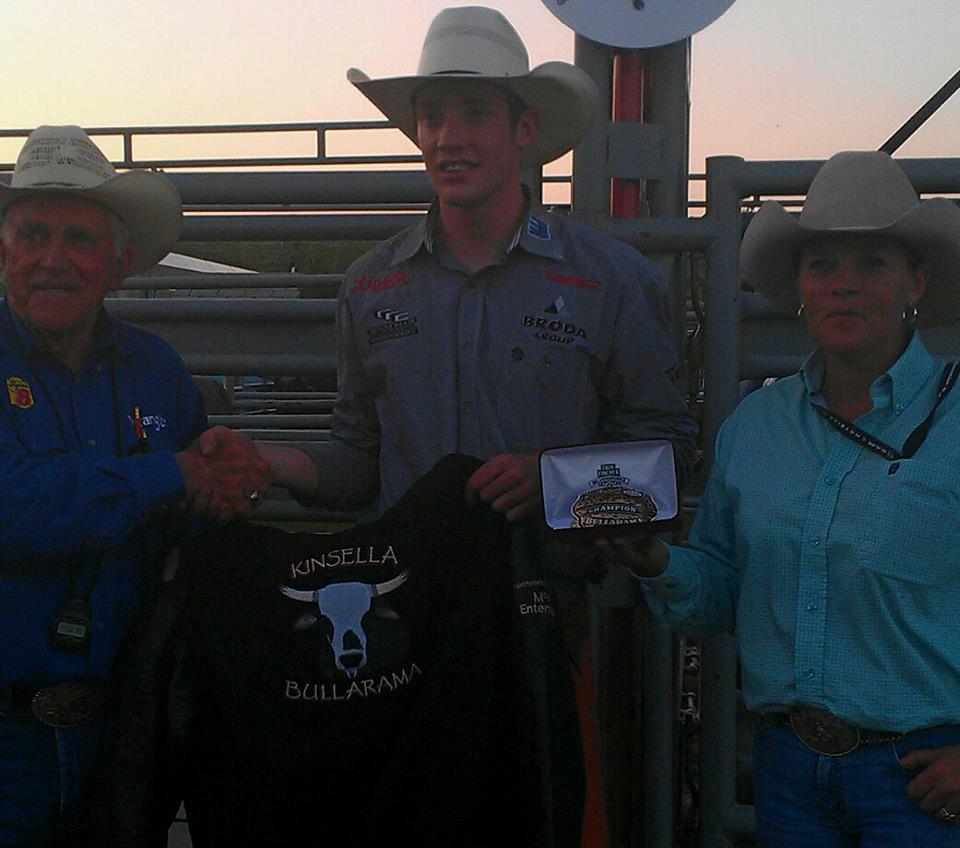