In its inaugural year the Daryl Mills PBR Invitational was the second largest PBR Canada event, according to prize money, held in 2013. Event organizer and 2006 Canadian Professional Rodeo Association Hall of Fame Inductee, Daryl Mills and his family are confident in what this year’s event will bring.

“I think it’s going to be good, especially the evening performances. We’ve made a lot of changes to make it better.”

Friday features a VIP meet-and-greet at the host hotel and a $3,000 grudge match concluding the long go that evening.

Jake Mathews and his band will perform on Saturday night following the performance.

As the only break this spring from the PBR’s Built Ford Tough Series along with $30,000 in added prize money, the event is expected to draw many of the top PBR riders.

“Everybody will be there. It’s sounding promising. We’ve already got people setting up flights to get here,” Mills said.

The caliber of professionals does not end on the arena floor. Announcer of the year, Joe Braniff will be joined by Kevin Bush in the announcers stand.

Canadian Champion Justin Volz is returning as the organizer for the event stock with Brett Monea and Monty Phillips working as bull fighters.

Sound and lights will be provided by Dean Phillips and are expected to be one of the many event highlights.

For more information on the event please visit www.pbrcanada.com. 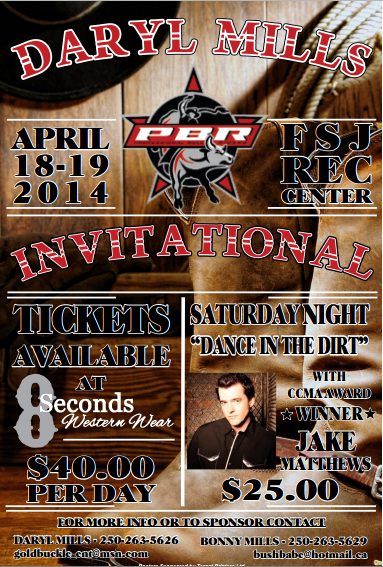