Marwayne, AB: The Marwayne Arena couldn’t have been any more full of people last night for the First Annual PBR Canada Touring Pro event there.

When talking to Justin Volz before the event he figured it would be full. Not one seat in the entire building was empty. He was right.  It was great to see the support of the community and the surrounding areas.

As for the bull riding, here’s how things went when figuring out who’d take home the biggest chunk of the $6,000 in added prize money.

Cody Coverchuck started it out after a bit of trouble getting things going.

Cody Moore made an identical ride on Diego once again. Similar to the one he made a couple weeks ago in Prince Albert.

After getting a re-ride, Justin Lloyd capitalized with this ride on Cowboy’s Choice of the Girletz’s

Ty Elliot keeps picking away with this 81.5 on the Skori Bull Big Iron.

Tanner Girletz finished up the Long Go with this ride on the Braithwaite Bull 679 Regulators Northern Lights.

Going into the Short Round of the Bull Riding, things looked like this.

There weren’t any qualified rides in the Short Round until Tanner Girletz took on the Skori bull Pen Pal.

Young Gun Cody Coverchuck from Meadow Lake, SK made a big splash tonight after his long round ride and then this one in the Short Round on Skori’s Gingas Kong.

Things kept rolling when Justin Lloyd put together this ride on Off the Cuff. He was stepped on after the ride but is doing alright again today after being bruised up a bit. His Dad said this morning Justin is thankful for his vest.

As the last rider to go, Chad Besplug needed an 83 for his second win in as many  nights. Here’s how it went on the Wild Hoggs bull South of Heaven. 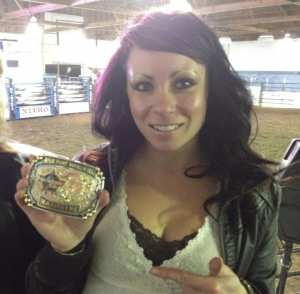 The bull of the night was the Girletz’s World Finals Qualifier 625 First Nation Sensation. There was even a buckle presented to Kevin Girletz for the bull. He gave it to Nikki Phipps since she owns interest in the bull. Here she is pictured left with the buckle, and here is the trip vs. Kyle Lozier.

At the end of the night I was able to catch up with Chad to talk about the outstanding week he’s been having. The best part has to be that he’s on his way to Trail, BC right now, an event he’s won or tied to win for the last four consecutive years.

That’s it and that’s all from here in Marwayne, AB for this year’s PBR Canada Touring Pro Event. Thank you very much to the great committee involved with the event. Justin Volz, Denton Edge and their families and friends all put hours and hours of work into making the first ever PBR Event in Marwayne a great success. We all sure do appreciate it! Thank you as well for the great beef on a bun supper in the Curling Rink too.

From what has been talked about, next year’s event will be much bigger and better. We are all looking forward to it.

From Marwayne, the next PBR Canada event we will see you at for sure is Asquith, SK May 31st. See you there!