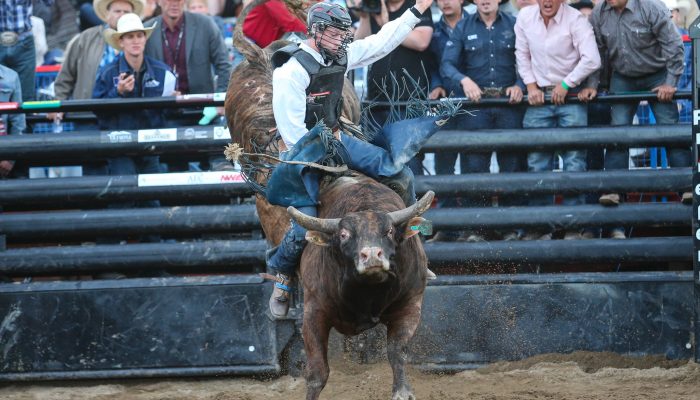 As one of two-riders to go a perfect 2-for-2, Marks sits atop the leader board at the iconic Calgary Touring Pro Division event

CALGARY, Alberta – In front of a raucous crowd at the renowned Ranchman’s Cookhouse and Dancehall in Calgary, Alberta,Shay Marks (Sunnybrook, Alberta) delivered a flawless performance to conclude the opening night of action at the Ranchman’s PBR Charity Classic atop the leaderboard.

As a two-day event, July 2-3, both Round 1 and the championship round take place each night. The winner will be the rider with the highest aggregate score on two bulls across the two days.

To begin the evening’s event, Marks made the 8 aboard Dunt (Skori Bucking Bulls) for 80.5 points, the seventh best score of Round 1.

Marks was quick to continue the momentum in the championship round, covering Twist of Barbwire (Thompson Rodeo Livestock) for 86 points.

Reigning Calgary Stampede Champion Marcos Gloria (Central de Minas, Brazil) finished the first night second as the only other rider to go a perfect 2-for-2.

Rounding out the Top 5 was Klayton Lakevold (Provost, Alberta). He made the whistle on Applause (Vold Rodeo) for 84.5 points.

Action from the Ranchman’s PBR Charity Classic will continue on Wednesday, July 3 at 7:00 p.m. MDT in Calgary at Ranchman’s Cookhouse and Dancehall.

Fans can watch all the action LIVE on RidePass at RidePass.com or via the mobile app.