12th Royal Rumbull To Be Bigger and Better Than Ever

Coronation, AB: Twelve years really isn’t that long of a time. For Darin and Lori Eno it’s probably flown by. With the raining of their two kids Tanner and Taylor, along with the countless hours of raising bucking bulls, working and countless hours behind the wheel travelling to nearly every bull riding in Western Canada it’s probably been really fast.

Over the phone this morning, Darin told of the work that’s gone into the twelve years of what is now the Coronation Ag Society Royal Rumbull. It all started as an idea as most event do.

“It first started in 2001. We were going around to a bunch of events at the time and thought it would be pretty cool to put one on ourselves.” Darin explained. 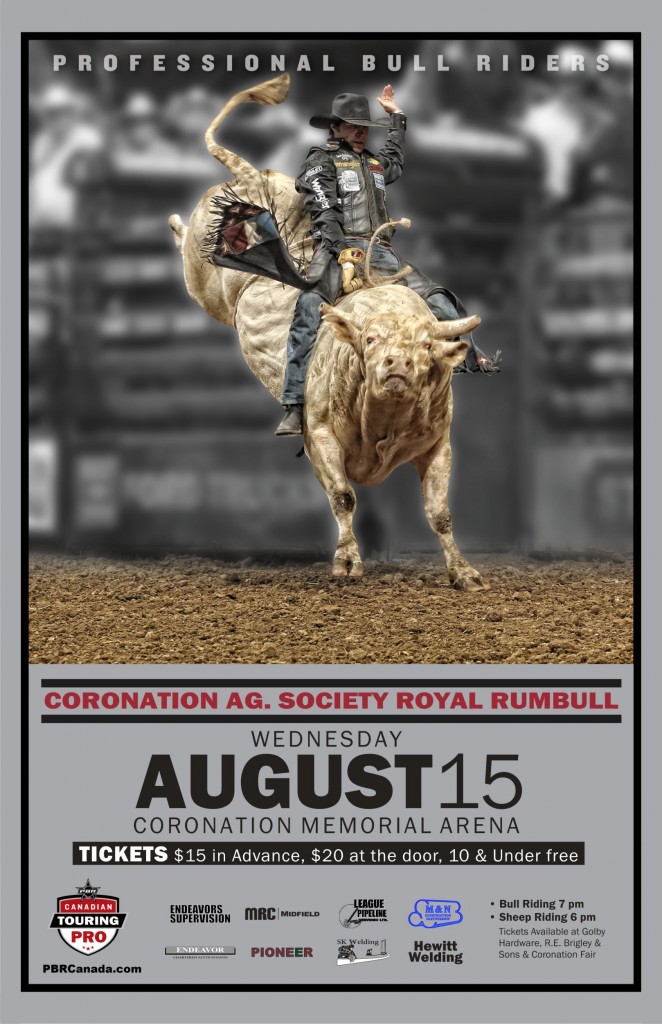 “So I went around a bunch of local companies and asked them if they would interested. Pretty soon we had enough sponsor support so that it would work out.”

The Royal Rumbull spent it’s first three years outdoors. Unlike the one day CPRA event in June, it didn’t get rained on. Until the fourth year that is.

“We bought a set of chutes from Jason Davidson and went indoors. It rained like hell that year so the move inside was a lucky one.” Darrin joked. “It’s been inside ever since.”

What started out as an idea has grown into a big event. $3,000 was added in prize money the first few years. It went up to $10,000 for the past six years or so. This year there will be $12,000 up for grabs as well as Tyrel Jensen trophy buckle.

That buckle is one that many guys still wear. Ras Evarts being one of them who now resides in Coronation himself.

CPRA Announcers of the Year, Dave Poulsen will commentate the night’s bull riding action along with Wes Cummings of Water Valley, AB. Twenty One riders are currently entered and more are needed for the event to be full. Anyone out there who’s not enter should call the PBR’s main office line at 719-242-2800 and get your name on the list.

Speaking of riders, you’ll see every single past champion of the PBR in Canada in action a week from today, August 15th in Coronation. Scott Schiffner, 2006; Tyler Pankewitz, 2007, Aaron Roy 2008 & 2010; Beau Hill 2009 and finally last year’s winner both of the Royal Rumbull itself and the 2011 PBR Canada National Champion, Tyler Thomson.

“Aaron Roy won it or split it the three of four years before last year.” Darin added.

When you put the best bulls in Canada together from Skori Bucking Bulls, Wild Hogg Bucking Bulls, Sawyer Bucking Bulls, Vold Rodeo, Rafter G Cattle Co, Flying High Rodeo Co and Eno/Kubinchak themselves, the cream will always rise to the top. Some of the bulls likely to be featured in the short go will include the likes of Ellie Skori’s Gingas Kong, Curtis Sawyer’s Remington Country and of course the great Unabomber of Eno/Kubinchak.