Cassidy Takes Round Five of 2014 #WranglerNFR

LAS VEGAS — It’s been four years since Curtis Cassidy won a round at the National Finals Rodeo.

On Monday night, Cassidy won with a time of 3.3 seconds, only one tenth of a second off the fastest time of the week thus far.

“When I was catching the steer, I remember thinking I broke the barrier and I’m catching this good sucker right here. I threw him down and I got back up slow and I looked at the barrier and I figured the judges would be there for sure picking the pigtail up. The pigtail was still in the barrier and I couldn’t believe it, it was awesome. Then, to be 3.3 makes it even sweeter,” Cassidy said, earning $19,002 for the victory moving his total to $26,971 on the week.

In round four, the eleven-time Canadian Champion registered a time of 17.7 seconds. Putting runs like that in the back of his mind is something he’s learned to do to reach the levels of success he’s achieved.

“It’s rodeo, that’s exactly what it is all about. One day it’s the depths of despair and another day you are on top of the mountain. Rodeo is humbling. You can’t ever get too cocky because it’s diamonds or dust, and it’s like that every day everywhere you go,” Cassidy said. 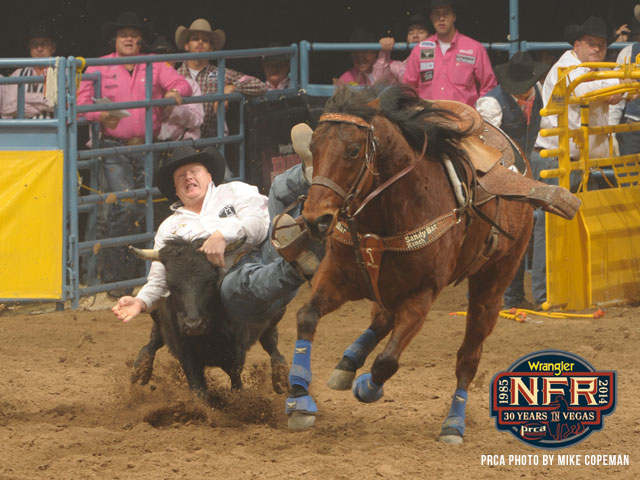 Curtis Cassidy gets down on his steer in round five of the Wrangler National Finals Rodeo on December 8th, 2014.

Now sixth in the world at $84,421 on the season, the Donalda, Alberta cowboy sits $44,555 behind world number one Luke Branquinho and tenth in the aggregate looking for his first gold buckle.

“I guess I’m a long shot. I am still kinda sorta in the average, I’ve got them all down. I could sneak in there to win a decent average check. I need to be winning as much as possible. I gotta keep doing what I did tonight, draw right and keep going at the barrier real aggressive,” Cassidy said.

Baillie Milan is hazing for Cassidy here in Las Vegas and the two ride a team of horses from Dustin Walker by the names of Tank and Poss.

“Yeah he’s a really good horse. He’s a little green, only been rodeo’d on for a couple years. I really like the horse because he’s got the talent to be great. He’s big and he’s got speed and athletic ability. I think he’s just gonna keep getting better and better,” Cassidy said of his current mount, Tank.

Going back to 2010, Cassidy won that tenth round on the one and only legendary bull-dogging horse Willy. That was the last time the two would compete together at the NFR.

“He was great for myself and so many other guys. He was in his own league that horse. He helped me and some other guys be great. He allowed guys to go from making the NFR to having a chance at a gold buckle. That’s what great horses do,” Cassidy said. 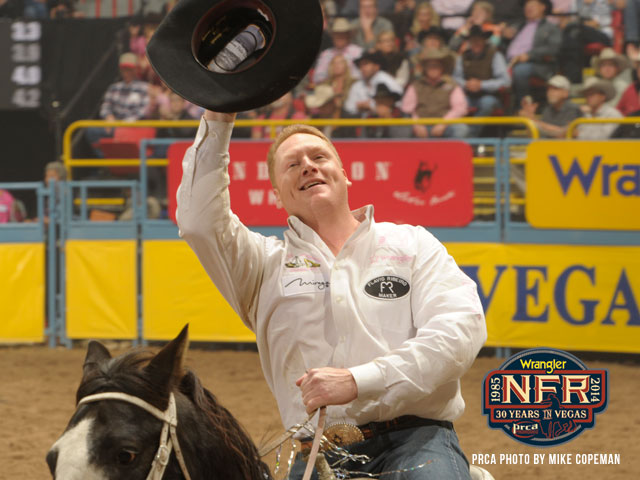 Curtis Cassidy salutes the crowd after winning round five of the Wrangler National Finals Rodeo on December 8th, 2014.

That finals in 2010 didn’t start out as good as they could have.

“I started out on Casper which has been great to us and he didn’t work for some reason. Then I got on Lee (Graves)’ horse for a couple and it still didn’t feel right. Then I switched to Willy for the last five or six steers. As soon as I got on him I went from zero to hero like that night. It just started turning around. I think I placed on just about every steer I ran on Willy that year and then I won the last two go rounds,” Cassidy said, missing Willy’s presence in the rodeo arena.

“It was really neat to winning that last go round the last time we had Willy here. We pretty much retired him after Vegas that year too. It was kinda…” Cassidy stopped as his emotions were revealed. “…it was bittersweet, winning the go rounds and retiring him. He is amazing, I still get choked up talking about him.”

Willy is considered part of the family

“He was and he is. Still is to this day,” Cassidy finished.

Jake Vold weathered the Storm Cloud from Stace Smith Pro Rodeo for an 84 to place sixth tonight in round five worth $3,065. Vold now has earned a check in every round moving his total to $24,928 in the past five days. Trail Dust from the Calgary Stampede helped Justin McDaniel to a third-best 86 points and Kaycee Field rode Wanye Vold’s Mucho Dinero to a fifth-best 84.5 crossing the $200,000 mark on the season as the number one man.

Combined, Cassidy, Vold and Flundra have earned $68,143 so far. The last Canadian to win a round at the Wrangler National Finals Rodeo since Cassidy’s win tonight was Lindsay Sears in round eight of 2012 event.

Official Results from Round Five of the 2014 Wrangler National Finals Rodeo at the Thomas & Mack Center in Las Vegas, NV on December 8th, 2014.

What would Dwayne do? pic.twitter.com/979Sh9em5i

Quote of the Day

How many rodeo queens does it take to screw in a lightbulb? None, their moms do it for them! – JJ Harrison.