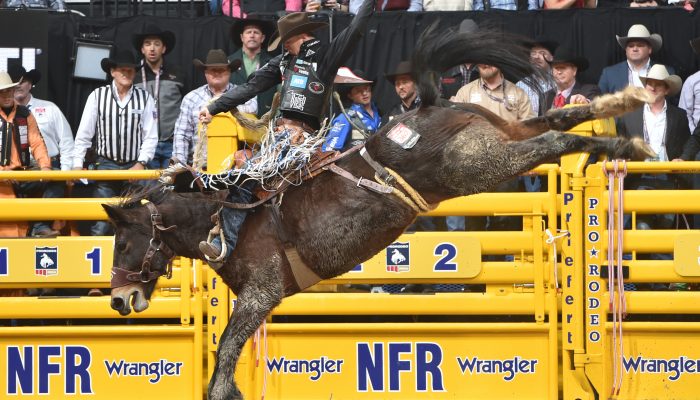 LAS VEGAS — As the 2016 PRCA World Champion in the bronc riding, Zeke Thurston came into Vegas this year for the Wrangler NFR with a new title under his belt.

That missing win, was a Canadian title which he picked up last month in Red Deer, Alberta.

Starting things off on the right foot, Thurston rode Sue City Sue for 88 points and the Round 1 on night one.

“I’d never had [that horse] before, but I’d seen it lots,” Thurston said. “Cort Scheer and I split the sixth round here last year and he was on that horse. They’ve won lots of rounds on it and it’s a great horse. Everywhere they get on that horse they’re going to win. I was very happy with the draw.”

“Just roll on, have fun and enjoy it,” Thurston said. “Win, lose or draw, we’re lucky to be able to come here and do what we get to do.”

Coming off that Canadian title, Thurston felt comfortable coming into his fifth WNFR at the brightest lights in Pro Rodeo.

“Oh, it’s great. It gives you a confidence boost,” he said. “You’ve got the hardest one out of the way, and you just try to keep the ball rolling and just have fun.”

Also on night one in the bronc riding, Dawson Hay (Wildwood, Alberta) earned a check in his first out from the yellow bucking chutes. Hay rode Spotted Blues from Big Bend Rodeo for 86 points and a split of fourth worth $7,333. Jake Watson (Hudson’s Hope, British Columbia) was given a no-score.

In the bull riding, Jordan Hansen (Ponoka, Alberta) went out to an early lead after putting up 89.5 points on Hou’s Bad News but was pushed down to fourth as Stetson Wright won the round at 92.5 points in a round that saw three 90-plus rides. Wright holds a commanding lead in the all-around world standings, looking to become the first roughstock contender since Ty Murray to win the gold buckle in that event in 1998.

Scott Guenthner (Provost, Alberta) had hell against his steer but got him down in a time of 18.2. Winning the round was two-time aggregate champion Dakota Eldridge of Nevada with a time of 3.6.

Four-time Canadian Champion Shane Hanchey moved up to No. 3 from No. 5 in the world in the tie-down roping thanks to the only seven-second time of the round at 7.6.

First-time WNFR qualifier Emily Miller won the round in the barrel racing with a time of 13.63. Team ropers Cole Davison and Tyler Wade won the round stopping the clock in a time of four seconds flat.