For every Cowboy, the feeling of finally arriving comes at that first NFR qualification. For Winn First Ratliff, JR “Hotman” Vezain and the always fashionable Caleb Bennett that time is now. 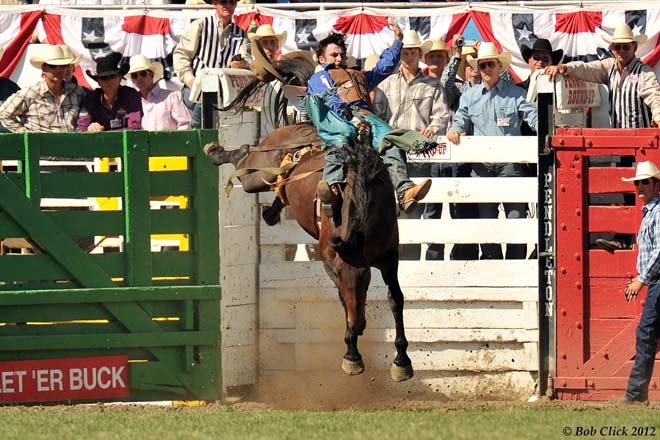 Winn Ratliff (Pictured right in Pendleton, OR) the 2011 College National Finals All-Champion gives credit and praise for his success in the arena to God. Though he says that travelling with myself and veteran Heath Ford in his rookie season, (2011), and Jarod Keylon and Ford again this season has helped his confidence in himself. Winn’s parents have also helped spur him on as Winn says, “My parents always told me to give 110%. They inspired me to keep going towards my goals. My mom told me not to be just another circuit guy, if I was going to do this I had to compete with the big guys at the big shows.”

Ratliff had substantial success in Arcadia, FL, Springdale, AR, Marshville, Mass., Elk City, OK, Fort Worth, TX, San Antonio, TX, and Caldwell, ID. Ratliff tore an abdominal muscle on his right hip in the wildcard round at in Rodeo Houston. This forced him to turn out of the short round of Rodeo Austin on March 24. Ratliff did not return to competition until June 11th in Ft. Smith, Arkansas. Ratliff commented on the injury, “I was disappointed- going off on a roll. But I realized everything happens for a reason, even if we never find out what that reason is. I was glad to get the time to stay home with my family and help out around the place.” Ratliff was uncertain how things would be coming back from, “mending his wounds on the couch,” “I felt out of shape,” Ratliff stated, “but thankfully things sort of picked up where they left off.”

For Ratliff, this season is devoted to God, “whatever his will, I give my all to the glory and praise of God.” Ratliff also stated, “You can be served or serve others, I strive to be a witness to others, in my words and actions.”

Going into his first NFR Winn has what his name suggests, to win first. In rodeo the focus is one ride at a time and Ratliff strives win each go-round. Travelling partner Heath Ford told Ratliff, “Go out to win, don’t worry what anyone else has, you might draw the best or the worst, either way you have to do your end.” Ratliff is sure the nerves will hit when he gets under the lights but states, “God will be with me, and calm my nerves, I’m just thankful God gave me the opportunity.”

Having missed out on the NFR last year, I asked Vezain what was different about this year. “Nothing really,” stated Vezain, “I drew good, so I was winning, having fun and closing the door to all negativity. There’s a little pressure riding against the big dogs at first, but after a while and enough success you realize you are one of the big dogs.”

Vezain has had great success at Cody, WY, his home town rodeo, Reno, NV, San Antonio, TX, Puyallup, WA, Cheyenne, WY, and Pendleton, which has put him at the cusp of his regular season goal of $100,000 and a top five placing going into the NFR. JR has hit the road with a red hot fury this year stating, “I hate to lose, I went as hard as I could and sought to leave no doubt in the judges’ eyes. I was never satisfied, I always strive to be better and beat the next one down.”

JR admittedly hasn’t thought about what he wants out of this NFR, “Every time I do it sends chills down my spine, but I guess like everyone I want to be the NFR/ Average champ, ride all ten head and through that win a world title. I’d also like to win a few go-round buckles; I have a lot of people I owe nice buckles to.”

Vezain claims that travelling with Bennett works because they want the same things. Both riders know the key to doing well is having fun at it and recognize that there is nothing better than doing what you love. They help each other, feeding off of and pushing each other.
Bennett states that though he has had great family support, his own desires, dedications and wants have helped him strive for his goals and get better.

This year marks a change in Bennett’s typical year for the plain fact he has been healthy throughout. In past years, torn rib muscles, torn and pulled groins, bicep issues and a fractured pelvis have staved off an NFR qualification, an issue many cowboys can relate to.

Bennett has had success in Reno, Salinas, as well as Ogden, and Salt Lake, Utah, amongst many other cumulative placings that have added up in a big way.

When asked about this first NFR, Bennett said, “It would be cool to win the average- the actual finals. And have frickin’ fun, you gotta have fun.”

Bennett stated that a goal for this year has been, “Win lose or draw, make sure to leave the arena, and rodeo with a smile. You have to suck it up and go onto the next one. I feel blessed to do what I truly love to do, instead of working a 9-5.”

Though the three cowboys are distinctly different, they all appreciate being blessed with this first NFR qualification and you can expect Ratliff’s Glory to God, Vezain’s fiery ambition, and Bennett’s win lose or draw smile to be followed with flashy spur stroke and outstanding success this December in Las Vegas. 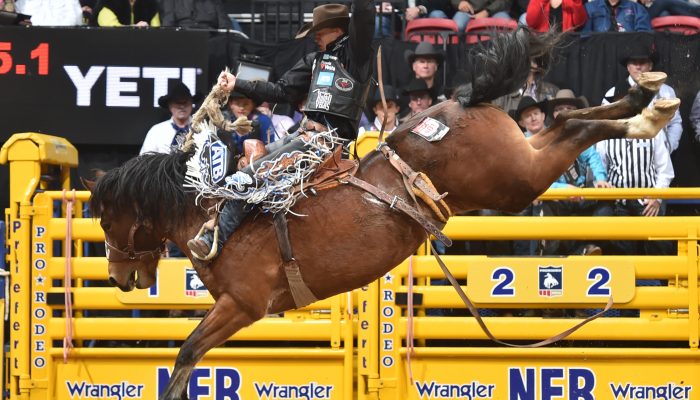