CODY, Wyo.; June 30, 2014 — The 95th Anniversary of the Cody Stampede kicked off on Monday night with the Cody/Yellowstone Xtreme Bulls and a cowboy that started the “Cowboy Christmas” run with a $13,486 win.

Brett Stall from Detroit Lakes, Minn., was the big winner here after conquering two bulls for a total of 176 points earning $13,203. It was a huge win for Stall who missed last year’s Wrangler National Finals Rodeo (NFR). He qualified for rodeo’s championship event in 2012. He had hip surgery in February of 2013 and returned to competition just before the Fourth-of-July run known as “Cowboy Christmas.”

Stall finished the season in 25th place last year, 10 spots out of an NFR qualification. He entered the Cody/Yellowstone Xtreme Bulls in 19th place in the Professional Rodeo Cowboys Association world standings and with the money he earned here should easily move into the top 10. More importantly for Stall, the win is a big boost as he enters one of the busiest times in the rodeo season. 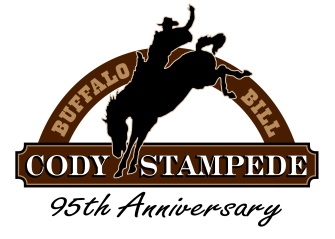 He tied for the top spot in the first round on Summit Pro Rodeo’s Curtis Lowe with an 86.5 points. He and Corey Navarre, from Weatherford, Texas, had the highest scores going into the final round. Unfortunately for Navarre, he failed to last eight seconds while Stall rode Frontier Rodeo’s Kojak for 89.5 points to win the title.

“I’m really craving riding bulls and rodeoing right now,” Stall said. “This is one of the biggest wins of my career. This town, with the Night Rodeo and all, they get behind us. It’s just a great rodeo.”

Stall will be competing in Livingston and Red Lodge, Mont., before returning here to compete at the rodeo on Thursday.

There was a tie for second place here with the reigning world champion J.W. Harris and College National Finals Rodeo (CNFR) qualifier Ty Wallace. They each rode two bulls for 167.5 points to win $4,723 for their finish in the overall standings. Harris, from Mullin, Texas won the final round with a 90.5 point ride on Summit Pro Rodeo’s Pretty Boy. That was also worth $3,118. Add in the money he earned in the first round and he collected over $8,408.

Wallace, who is from Collbran, Colo., recently finished fifth at the CNFR in Casper, Wyo., for Odessa (Texas) College. He was ranked fifth in the PRCA world standings before collecting $7,132 here.

Rodeo action at Stampede Park starts on Tuesday with timed-event slack at 9 a.m. The first performance of the Cody Stampede begins Tuesday night at 8 p.m. Live results will be available @codystampede on twitter. More information is also available at www.codystampederodeo.com or codystampederodeo on Facebook.