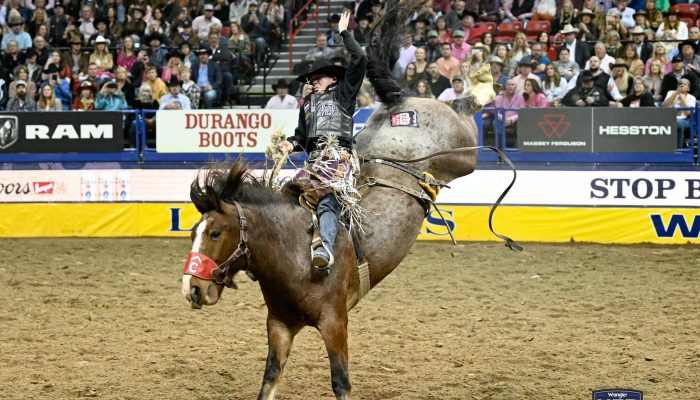 EDMONTON, Alberta (December 6th, 2022) – Logan Hay has undoubtedly proven that he deserves to be at this year’s Wrangler National Finals Rodeo. Hay has currently won $82,700 after six days of competing, the largest payout coming from his two back-to-back round win’s. In round five, Hay matched up with “Larry Culpepper” from the Pete Carr Pro Rodeo for a striking 89 points. For round six Hay was 87.5 points on “Yellowstone” from Frontier Rodeo, earning him the win of tonight’s round and another cheque worth $28,914. This puts Hay third of the average and only $3,264 behind fellow Canadian and 2X world champion, Zeke Thurston, who has won a total of $85,964 this week.

Thurston matched up with the Canadian bucking horse “Lunatic Party” from Outlawbuckers Rodeo for a third place finish in round six. He marked an 86 point ride and earned himself $17,255, holding him in the number one spot of the aggregate.

Another Canadian bronc rider who is picking up the momentum at his second WNFR is Layton Green. Green placed fourth in the round with an 85.50 ride on another Canadian horse from the Big Stone Rodeo Inc. “Rubels”, and earned himself $12,125.

The last Canadian bronc rider to make money in round six, who has had a stellar week, was Kolby Wanchuk. Placing in every round except one, Wanchuk sits fourth in the average after adding a sixth place finish and $4,664 to this week’s earnings. Wanchuk was 84.5 points on “Big Tex” from the Pete Carr Pro Rodeo.

Sitting second in the average and second in the world, Stetson Wright is determined to catch up to the man who has a strong lead above the rest. Sage Newman may be out of the average, but he currently stays on top of the world standings with $308,349.06 won this year while Stetson Wright has won $270,973.77. This puts the cowboys $37,375.29 apart in the race for the world championship. After winning second and $22,851 in round six, Wright is inching his way closer to Newman.

Our other Canadians have not had the luck they wanted this week in their respective events. Orin Larsen did not compete in round six due to an injury he has been battling throughout the finals.

Jeremy Buhler and Rhen Richard also faced another round on no luck by missing the head catch in round six.

Jared Parsonage may be facing first time jitters at his first WNFR as he has not earned a cheque from any of the six rounds. We are hoping he turns things around for the last four rounds!