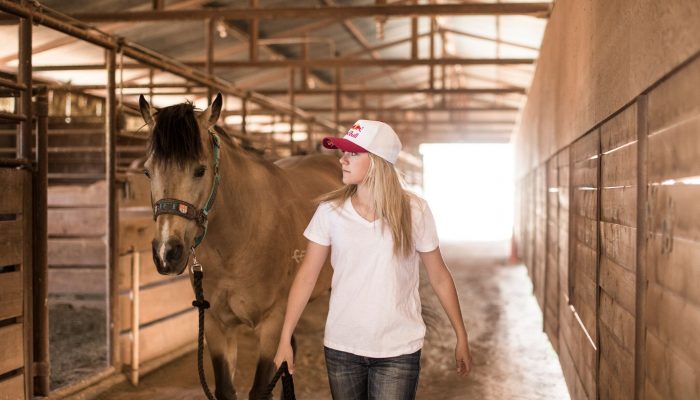 Ganter sets sights on return to WNFR and World Title

A two-time Wrangler NFR Qualifier, Jackie is seeking her third straight trip to the WNFR

Growing up in Abilene, Texas, Jackie Ganter started spending time in the saddle before she could walk. Traveling to rodeos as a kid to watch her mom, Angela Ganter (also a competitive barrel racer), Jackie quickly uncovered a true passion for running barrels. An English rider turned barrel racer, Jackie realized she loved the sport so much that she decided to graduate high school early to pursue her dream of becoming a competitive barrel racer in the WPRA. At the young age of 18, Jackie received her WPRA card and quickly started chasing cans faster than most other riders.

Prior to turning pro, this Texas-cowgirl improbably won the 2012 Barrel Racing Texas High School State Championship, as a freshman, and 2014 All-American Youth Barrel Racing Title. In her first year in the WPRA, Jackie competed in 100 rodeos, earned over $65,000 in season earnings and qualified for the WNFR. After running hard for 10 rounds in Las Vegas, Jackie won the WPRA Rookie of the Year title – making her one of the youngest athletes to win the award. The very next year, she qualified again for the WNFR; this time entering the desert ranked second for the 2016 season with earnings of $116,387.

Success has come quickly to Jackie, but the road to victory has been a long and arduous one for this up-and-coming barrel racing star. In 2016, Jackie and her mom put more than 86,000 miles on her truck and trailer as they toured North America with Jackie’s four horses – Jet, Baby J, Cartel, R and Shooter – in tow. In many ways, her passion for, and dedication to, the sport is exemplified through the never-ending miles spent chasing down the dream of one day winning the Wrangler NFR and WPRA Gold Buckle.