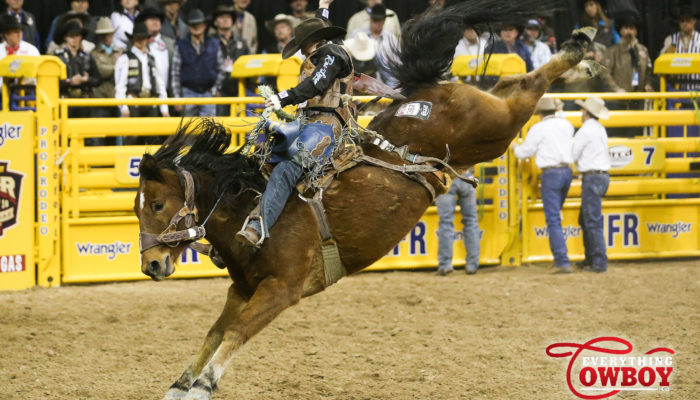 EDMONTON, Alberta (December 5th, 2022) – With a total buck-off percentage of 57%, 90 point scores or higher with each trip, and many prestigious awards next to his name; I don’t think anyone is ready to say goodbye to this incredible horse. 242 Ols Tubs Get Smart – the 2022 CPRA Saddle Bronc Riding Horse of the year and the 2019 World Champion Bucking Horse, will be giving his final rides at the biggest event of the year. Only two more trips and he will be living out his well due retirement in the field with the rest of the old boys and the younger up and comers.

In 2017 the Macza Pro Rodeo took over the stock from the Northcott family and the Macza family knew how lucky they were to have this little gelding within the herd. Although they didn’t raise this gelding, Willy Macza recalls the first time he got to flank Get Smart and witness him explode out of the chute for the first time,

“I was in Falkland and he bucked off a guy. It was pretty cool flanking a pretty famous, historical horse” said Macza.

Willy also spoke about the most memorable rides he got to witness when he was flanking him. There are many rides he had to ponder but he stated,

“Oh probably when Zeke got on him at the NFR, I don’t know what year it was, but he was 90 something and it was pretty dang cool. I think he won the round”

During the 2022 Canadian Finals Rodeo the crowd got to watch his very last trip at the CFR with Zeke Thurston. He reared out of the chute, as he always does, and helped Thurston break the CFR arena record with a 93.25 point ride.  After six years of owning this horse, Willy only had one word to describe what he is feeling as they head into the Wrangler National Finals – “sad”. Willy Macza is a man of few words but he couldn’t have described the feeling of this farewell any better. The entire world will get to witness the last rides this 19 year gelding will get to give. With the bronc riders that qualified at this year’s WNFR, it would be no surprise to see a round win or a ride that scores over 90 points.

The Macza family has reached the goals that every contractor would like to have with a horse. Each and every time he blows out of the chute there is a smile on their face, and there is no doubt that these last two rides will be filled with smiles and some tears. We would like to congratulate the Macza Pro Rodeo on a great career with Ols Tubs Get Smart and we wish a final farewell to one of the greatest bucking horses in history.

Here’s to retirement, old boy. Hopefully you can give some tips to the younger generation that sit in the field with you. Get Smart will be out in the TV pens, of course, and we can’t wait to witness what he can do one last time.