One of those Reserve National Championships goes to Steer Wrestler Brayden Lelek from Duchess.

Lelek may have been labelled as the underdog going into Nationals. Not for lack of skill, but for lack of experience.

In just five months, Lelek has seen huge success. Where does a young kid go from there?

Good news for the Lelek family goes further than the recent steer wrestling success. Brayden’s mom just finished a stem cell transplant and is in good condition. Brayden kept her informed on his progress throughout the week with text messages.

“She was pretty excited,” Lelek said.

Of course, it wouldn’t be an understatement coming from the humble and polite 17-year-old.

Lelek gives credit to Ken Leman for letting him ride his horse “Smoke Em” and to Trevor and Roberta Purdie for taking him down to Rock Springs.

Emma Reinhardt from Irricana took home Alberta’s other Reserve Championship in the Girls Cutting. After a discrepancy in the short round, the title is somewhat bittersweet.

After Sadee Smith of Idaho marked a 143.5 in the short go, it was announced that Reinhardt was winning the average by half a point.

“Next thing I know, they reviewed her (Smith’s) score and bumped her to a 144.5,” Reinhardt said which moved Smith into the lead in the average.

“Winning a National Title has always been a huge goal of mine so to lose by half a point was a huge disappointment. But I am very thankful to have done as good as I have. I would like to thank Kim Dampier for letting me show her incredible mare and the Boisjoli family for taking me to Nationals,” said Reinhardt.

The young cutter may not have reached her goal of a National High School Championship but a different National Title is still within reach. The NCHA show in the spring will be her last chance to show in the senior youth class. The last time Reinhardt was at the NCHA Western Nationals, she placed third. This time, she says she wants to win.

With her focus and determination, she certainly wouldn’t be one to bet against.

The Short Go contained more Pole Benders from Alberta than any other state or province. Makayla Boisjoli ran a 20.184 to end up fifth overall. Hope Skocdopole was a 20.230 for a seventh place finish overall. And Kashley Seitz stopped the clock at 20.342 to finish eleventh in the average. 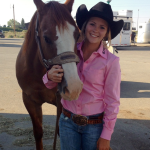 Hope Skocdopole of Big Valley says she may have had someone watching over her to help her accomplish the greatest success of her life so far. Hope’s grandpa, Jerry Skocdopole, was killed in an accident while working in the shop years ago and left this world too soon.

Everyone who knew Jerry, knew that he didn’t go anywhere without his old, black cowboy hat. The same hat that Hope recently dug out of a closet and wore for the last two rounds in Wyoming.

“I didn’t wear it the first round and I ran my slowest time of the week. As soon as I put it on, I ran my fastest times ever on Dot. So I know Papa Jerry was looking out for me,” Hope said.
Eryn Coy from High River was the lone Albertan Short Go Qualifier in the Barrel Racing. She ran a 17.653 for a twelfth place finish in the Short Go and tenth in the average.

Bull Rider Tyrell Ward scored a 75 in the Short Go and placed fifth in the average. Ward and Lelek led the Boys Team to a 12th place finish.

After two outstanding runs in the Breakaway Roping, Lakota Bird had a No Time in the Short Go. She was 5.52 seconds on two head which was still good enough for a fourteenth place finish.

Makayla Boisjoli also earned points in the Girls Cutting which gave her a fourth place finish in the Girl’s All-Around race. Boisjoli lived up to her all-around expectations after clinching the Provincial Title in June.

Every Albertan in Rock Springs can be proud of their National High School Rodeo Qualification. Just as with any rodeo, there was some heartbreak and tough luck. But every competitor will take home memories of their experience and a fresh perspective on what it truly takes to succeed.