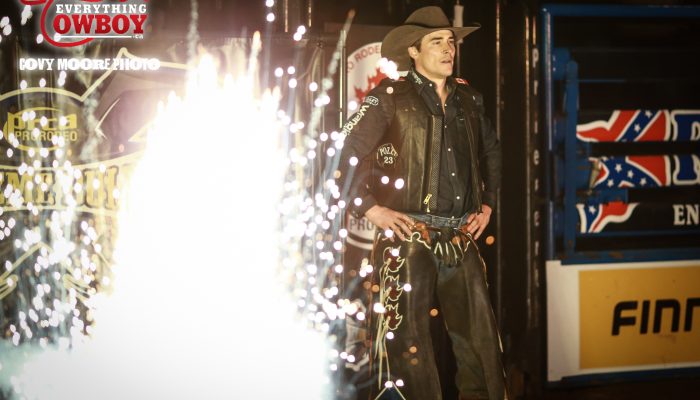 After a winter break from bull riding to allow himself time to heal up and concentrate on other things—home renovation, ice fishing and some skiing—the Ponoka, Alberta bull riding sensation was ready to get back at it.

“I had a good break,” Lambert noted, “but it’s full on now so I felt like I was really ready going into Red Deer.

The result was a solid two ride performance that enabled the Manitoba native to collect 172.5 points for the win and a tidy $3,756 payday at the Rebel Energy Services Xtreme Bulls event that kicked off the 2018 CPRA calendar season.

“I had a young Lindsay Carlier (X-6 Ranch) bull called Midnight Rain and he hadn’t been ridden yet,” the 2013 PBR Canada Champion recounted. “I got around the corner on him and he felt really good. I was happy to still be there at eight seconds.”

Lambert’s 84 points was good for second in the long go behind Coy Robbins’ 85.5 score on the Girletz bull, Wild Child.

“I think Midnight Rain is a bull we’re going to see a bunch this year;  he’s really good.”

In the short go, Lambert was part of a three way split with Garrett Green and Jared Parsonage—all three with 88.5 rides. Then, the two time CFR qualifier matched up with Outlaw Buckers’ Red Pheasant for his finals bull.

“I’d heard lots about him and I knew Curtis Sawyer had paid a lot of money for him,” Lambert noted. “I just cocked my hammer and was able to get him rode. He was away from my hand—which meant I had one that bucked into my hand and one away from my hand—so I was happy with my night for sure.”

The win, coupled with his second place finish at Regina’s Agribition Rodeo in November, provides a nice boost for Lambert who intends to make the CFR a major priority this year.

“Last year was the Global Cup and the year before I was injured some and that kept me in the middle of the pack so I really want to go hard at it this year.”

That means a schedule that will include the tour rodeos and bigger events on the CPRA calendar as well as a pretty full slate of PBR bull ridings including the Global Cup in June in Australia.

“A guy has to do both,” Lambert commented. “I have to go where the money is and to the places that give me the most enjoyment—I’m hoping that’s the CFR, the Calgary Stampede and the World Finals. Those are my goals.”

As for the Canadian Finals Rodeo, the central Alberta resident is looking forward to having the event in Red Deer.

“It’s so close to home for me,” Lambert enthused. “I love Red Deer and I’m really happy the CFR is staying in Alberta. The City and the Westerner really wanted it and I think they’ll do a great job putting it on. I’m excited about it and I darn sure would like to be part of the first one here in 2018.”

Next up on the CPRA schedule is the Chad Besplug Invitational Bull Riding February 24 in Claresholm, Alberta.