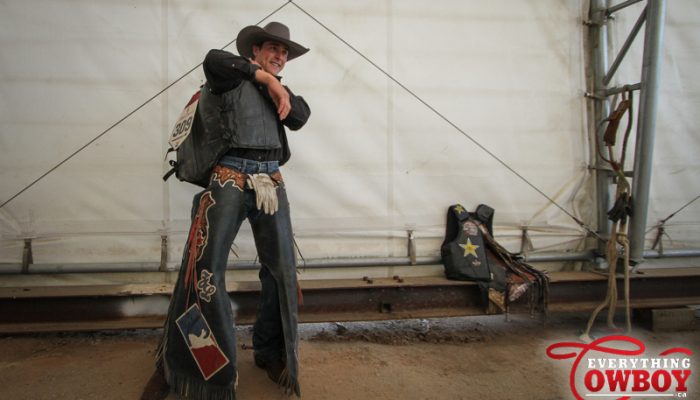 Zane Lambert wasn’t exactly expecting to come into the Calgary Stampede fresh off of a nine-week absence.

But that is the reality for the 30-year-old veteran bull rider, who is competing in his first rodeo since a wreck in Stavely left him out of action with some very severe injuries.

“I had a bull and I lost my bull rope and he came down with his back feet. I ended up breaking five ribs and collapsing my lungs. I had to be in the hospital for 10 days,” recalled Lambert of the incident, which has kept him sidelined for the past nine weeks.

But a speedy recovery was always in the cards for the 17-year-pro, who is once again competing in both the Pro Rodeo Canada Series and in PBR.

“The bones and stuff were good in six weeks. It still lingers around some things but everybody rides a little sore. I definitely feel strong enough to ride otherwise I wouldn’t be here. It was a quick recovery, I guess, from the way it sounds but boy, I sure feel good,” he said, adding that the extra time to rest and recuperate may have been a blessing in disguise.

“I feel like I’m coming in fresh and all of the other cowboys are sore from not having a break. So I’m feeling good and we’ll put that one behind us.”

Right from the moment of the crash, the Ponoka cowboy said he knew that he was going to be gunning to get back for Stampede.

“I think right from the wreck it was a goal for me. I got into this one, last year I knew, I think by January they gave me my package. So I’ve been looking forward to it since then. I was here to win $100,000, so we’re here competing for it now,” he said, adding that he’s feeling fine after his first two rides, though he didn’t make the full eight seconds on either bull.

“I’m just kind of trying to knock the dust off, here. My body feels good. I feel like I’m 100 percent ready to go, just feel like I’m a little bit rusty.” 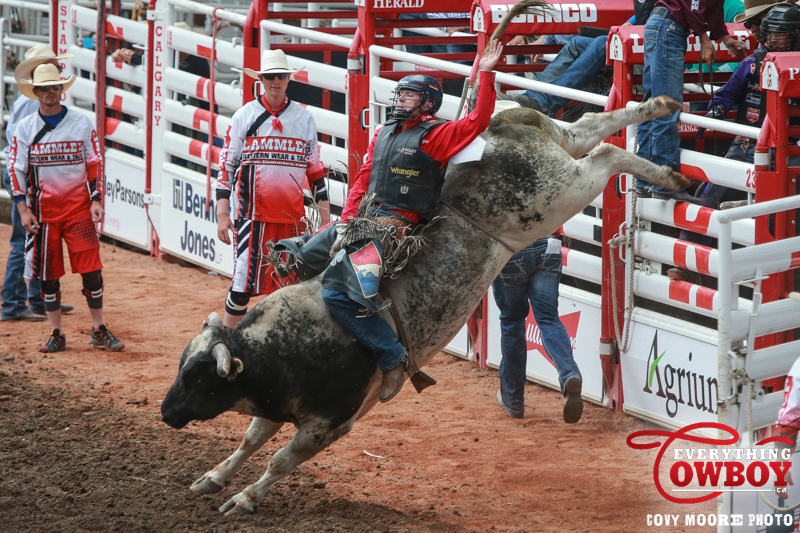 Zane Lambert competes on the second day of pool a at the Calgary Stampede.

The former Canadian Champion was in tough with his first two bulls of the week in Calgary, though.

“I had a bull on Friday that I should have got by. I was 7.6 seconds on him. I felt like the next day was going to be better but the bull kind of played into my weakness. He just kind of hop-skipped away from my hand. I’ve always had trouble with that,” he said, adding that the goal now will be to cover his final two bulls of the pool round.

Bouncing back from the first two rides won’t be an easy task, though. He will likely need to ride both and post big scores in order to have a shot at qualifying for Showdown Sunday.

“I’m going to have to pull out some 90s here, pull out some big scores and just ride my bulls. The rest will take care of itself. If I just do my job properly and get my head clear and everything out of the way, it’s going to fall into place. It’ll work itself out,” he said, also noting that he’s not dwelling on his injuries.

“It’s part of bull riding. You’re going to have those injuries. It’s the cowboys that are able to put that behind them and keep going. That’s what we’re trying to do here,”

As for what comes after Stampede, Lambert said he’ll be hitting the rodeo circuit hard over the next few months as he tries to get back the time that he lost due to his injury.

“We’ve entered everything that we can possibly enter. We’re going to be going hard for CPRA and PBR. We’ve got a big PBR Tour coming up in August, starting on the 20th, so I’m really looking forward to that one,” he said, adding that the goal for him is the same as it is every year.

“Just really do good, finish off the year and try to get back to both finals. Get a title under my belt again, that would be awesome and get back here for next year. Keep putting myself in these positions to win money and retire a happy bull rider.”