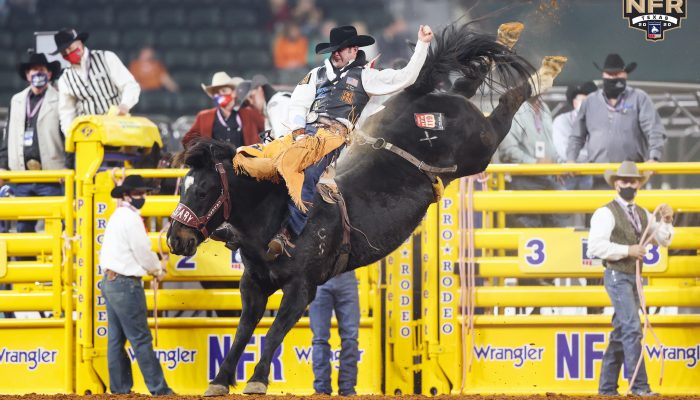 Canadian Buckers Own Round 3 from Wrangler NFR

CALGARY, Alberta — A pair of Canadian bucking horses stole the show for Canada in Round 3 of the 2020 Wrangler National Finals Rodeo from Globe Life Field in Arlington, Texas.

Canadian Orin Larsen was out of the money after getting behind his matchup in Frontier Rodeo’s Full Baggage, with 78.5 being the score. He’s 0-for-3 so far in regards to money won, two spots out on Saturday night.

In the bronc riding it was Allen Boore on Yesterday’s Delivery, also from the Calgary Stampede for 90.5 points, the highest marked ride thus far in that event. Zeke Thurston was disqualified tonight for missing his horse out in what would have surely been his first check of the week.

For 2016 PRCA World Champion Levi Simpson and team roping partner Shay Carroll Round 3 was their first check of the week. Their time of 4.4 was good enough for third place and a check totalling a mystery amount. Simpson joins Curtis Cassidy as the lone Canadians to cash a check at the 2020 Wrangler NFR, despite the general public being oblivious to the totals.

Levi Simpson and Shay Carroll earned third in Round 3 from the #WranglerNFR with this 4.4 second run in Arlington, Texas on Saturday night. pic.twitter.com/jxdhZcFhNE

Wrapping up the team roping, Dustin Egusquiza and Travis Graves won the round with a 4.2 second run. Kolton Schmidt and partner Hunter Koch had a bad go for yet another no-time.

In the steer wrestling, Will Lummus won Round 3 with a 3.5 while Curtis Cassidy was 1/10th out of the money at 3.9 which was his fastest time of the three rounds thus far.

As a last minute replacement for Caleb Smidt, Cory Solomon won Round 3 in the tie-down roping at 7.0 seconds flat. World No. 1 Shad Mayfield remains far ahead of the field with Round 1 and 2 winner Marty Yates failing to place in Round 3.

Finishing off the night in the bull riding, there were only two qualified rides. Colten Fritzlan of Rifle, Colorado won Round 3 at his first WNFR with a score of 89 points on a bull called Angel’s Landing from Bar T Rodeo. Sage Kimzey, Stetson Wright and Ky Hamilton were all bucked off. Kimzey now ranks No. 5 in the world after being passed by the only other man to ride a bull in Round 3 in Ty Wallace.