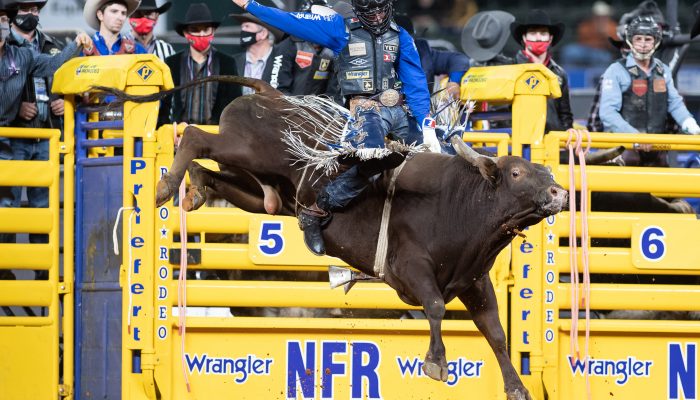 On Friday night, there was another name added to that list. That name? Stetson Wright.

That’s old news already though, on Saturday, Wright became the first roughstock cowboy to win more than one world title in the same year since Ty Murray won the all-around and bull riding in 1998.

Coming into the final round trailing No. 1 Ty Wallace by only $81.75. Both tied for fourth in Round 10 with matching 89 point rides meaning Wright edged Wallace by 5.5 points in the aggregate and one spot which made the difference. Wright finished the year with $267,940.53 over Wallace at $256,599.21. Rookie Colten Fritzlan won the aggregate and finished third in the world at $241,446.89. The streak of six gold buckles in a row for Sage Kimzey was broke as he finished fifth in the PRCA’s final standings at $184,763.91 but split Round 10 with 92 points and in true champion style pointed back at his pal Tim Bingham on the back of the chutes at the end of the ride.

After a less than stellar week at the #WranglerNFR, @SageKimzey finishes off Round 10 in style with a huge 92 point ride and a point back towards the chutes for traveling partner Tyler Bingham who was injured earlier this week. pic.twitter.com/uLhFdNK8o3

Stetson wasn’t the only Wright brother making history at the 2020 Wrangler NFR. Ryder Wright joined Stetson as the only brothers to ever win world titles in the same season, ever. Ryder won the title with $358,470.65 on the year, almost $40,000 more than second place Wyatt Casper. Ryder also set a new WNFR aggregate record of 876.5 points on 10 head, the only man to ride all ten in 2020. Not only that but he won five rounds, including a split of Round 10 with brother Stetson, tying a record he already shared with Billy Etbauer who did it on three separate occasions.

Hailey Kinsel and Sister all but clinched their third-straight gold buckle on Friday. There were a few very unlikely scenarios that could have unseeded her, but they didn’t. Kinsel and Sister also claimed the RAM Top Gun award, taking home $270,615 in Arlington alone. The team won their first Wrangler NFR aggregate title at Globe Life Field.

The steer wrestling was, as usual, one of the tightest events. Stetson Jorgenson led the aggregate heading into Round 10. All it came down to was 3/10th’s of a second. Jacob Edler split fourth in the round to claim his first world title and WNFR aggregate championship, by less than $2,000 over Jorgenson.

In the team roping, Colby Lovell and Paul Eaves overcame the adversity of being called out for a crossfire and receiving a no-time earlier in the week to win the world titles. This came for one of the first times without an aggregate check. Lovell won the buckle on the heading side by $452.65, over Luke Brown while Eaves won over Paden Bray by $2,982.86. Lovell and Eaves won the final three rounds in a row on the way to the title. Erich Rogers and Bray, the reserve world champion heeler, won the WNFR aggregate title.

Another extremely tight race ended up being the tie-down roping. World No. 1 and regular season earnings leader Shad Mayfield had one of the worst WNFR experiences ever but claimed the gold buckle by $230.66 over No. 2 Marty Yates. Yates would surely love to have even one of his runs back on the week, even the entire season. Mayfield roped four calves all week, finished last at the WNFR and still won due to such an incredible regular season.

Former World and Canadian Champion Shane Hanchey, riding Logan Bird’s horse TJ won the WNFR aggregate title in the tie-down roping, but missed the world title by $3,000, finishing No. 3 in the world.

That $260,000 includes the $10,000 per person in appearance money meaning Canadians L to R in the photo above, Kolton Schmidt, Levi Simpson, Curtis Cassidy, Orin Larsen and Zeke Thurston won over $210,000 in the rounds and aggregate.

Despite not placing until the sixth round, two-time World Champion Zeke Thurston of Big Valley, Alberta won the most of all Canadians at $93,377 and took fourth in the aggregate to finish in the No. 9 spot in the world.

Next best in Arlington was Inglis, Manitoba’s Orin Larsen who could have had an even better week if it wasn’t for getting knocked back to eighth in the aggregate in the final round. Larsen was bucked off Agent Lynx from the Calgary Stampede on Saturday putting him No. 6 in the final world standings, earning $71,134 in Arlington.

Donalda, Alberta’s Curtis Cassidy earned a single check at the finals for $8,884 plus his $10,000 guaranteed, Kolton Schmidt was in a similar boat for a week worth $25,654. Former World Champion Levi Simpson and partner Shay Carroll take home $51,250 each.

Six rounds were won on Calgary Stampede bucking horses in what could be their most successful WNFR ever.

Hats off to the Cowboy Channel and all involved in making the 2020 Wrangler NFR a huge success and allowing the entire world to watch live from their own homes during this global pandemic. In year one of six in the agreement, the broadcast is sure to improve even more in the coming years.

Another tip of the hat goes out to the PRCA for ensuring the payout of the Wrangler NFR was the $10,000,000 it has been in previous years. They didn’t have to have a season but they did and it was a smashing success.

The following are the 2020 World Champions and Wrangler NFR Aggregate Champions from Globe Life Field in Arlington, Texas.