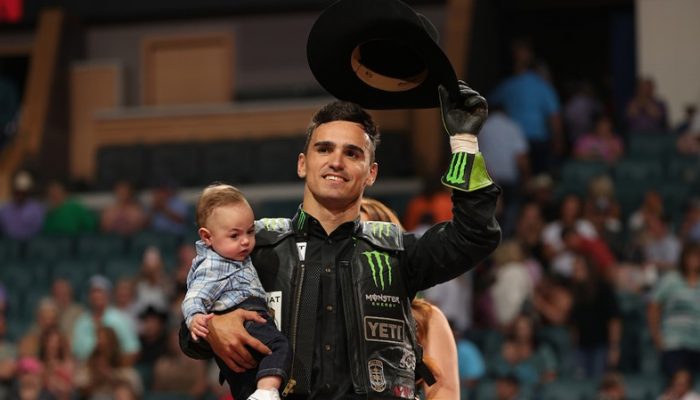 Photo Courtesy of the PBR

TULSA, Okla. – Sports history was made Saturday evening in Tulsa, Oklahoma, during the PBR (Professional Bull Riders) event at BOK Center. In a showdown of titans, reigning World Champion and current No. 1 Jose Vitor Leme (Ribas do Rio Pardo, Brazil) faced off against No. 1-ranked bull Woopaa (Barker Bulls/Hookin’ W Ranch), covering the powerful bull for the highest-marked ride ever in the league’s 28-year history, scored 97.75 points.

“This is awesome — it is hard to explain,” Leme said from the dirt moments later. “It is one of the best days of my life, of my career riding bulls.”

“Thanks to all my friends who helped me, and thanks to the fans. I don’t know what special (energy) this arena has, because J.B. Mauney rode Bushwacker here for 95.25 points. So now I put my name on history too with the best mark of all the years. That’s amazing. Thank God for everything.”

In a nearly flawless display of athleticism, Leme was marked a near perfect 49.75 points, out of a possible 50 points, while Woopaa contributed 48 points, the 10thhighest bull score in the league’s history.

The monstrous 90-point ride, Leme’s 16th of the season, also tied him with 1999 PBR World Champion Cody Hart (Gainesville, Texas) for most 90-point rides during one season. Hart recorded 16 en route to his gold buckle in 1999.

Leme had previously ridden Woopaa twice, both also scored in excess of 90 points. In November 2020, Leme clinched the World Championship aboard Woopaa inside AT&T Stadium in Arlington, Texas, marked 95.75 points, while he most recently rode him this past February to win the Unleash The Beast event in Fort Worth, Texas, courtesy of a 94.75-point effort.

Leme, who in 2021 is attempting to become just the second back-to-back World Champion, now leads the PBR world standings by a season-best 410.5 points. His historic season will continue Sunday, August 1 as the PBR Express Ranches Classic, presented by Pit Boss, continues in Oklahoma.