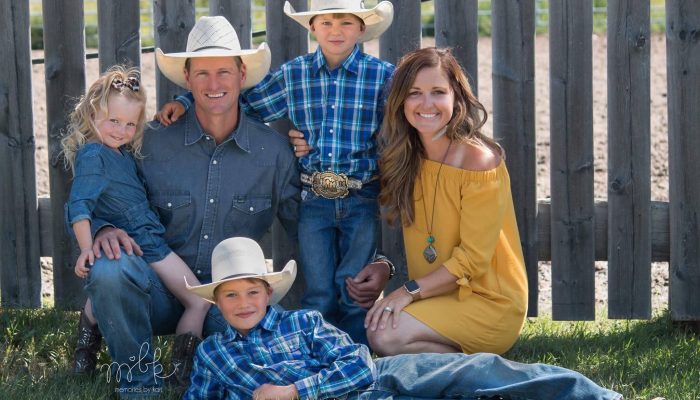 Where Are They Now? – Blade and Becky Young

Coming from a Rodeo Family who spent 15 years going from rodeo to rodeo watching my husband compete I often sit back and think about people we met going up and down the trail and I think to myself I wonder what they are doing now and this got me thinking that I bet a lot of Rodeo Fans think the same thing. This is where I got the idea to research some familiar names and catch up with them.

For my first article I have chose to write about Blade Young and his Family.  Blade is a former Professional Bull Rider that spent nine years pro in the Canadian Professional Rodeo Association (CPRA) and nine years in the Canadian Cowboys Association (CCA), this includes steer riding. Some of his accomplishments include numerous Canadian Finals Rodeo qualifications and a CPRA permit award, as well as several amateur Finals qualifications. Blade grew up on a ranch near Tyvan, Saskatchewan which wasn’t always ideal for travelling the rodeo circuit but when you have a passion for something you always find a way to make it work.

Now lets catch up on what Blade has been up to since retirement in 2008.  Blade and his wife Becky (Long) formally from Hanna, Alberta are raising their three children Grady (12); Davis (8); and Josie (4) on the ranch he started building in college; not far from where Blade grew up on a community pasture. They run 1,200 head of mamma cows.  Becky has a very successful career as an Executive National Vice President with Arbonne International. So now, one would think that would keep you busy enough, but not for the Young Family.

Blade started picking up at Rodeos and Bull Ridings in 2010.  It took no time for him to make a name for himself. There are countless hours that go in to finding and training that perfect horse and as any pick up man knows you don’t need one or two, you need a string of good horses; not quite as easy as throwing a rigging bag in the back of a truck with three of your best friends to ride bulls. Becky being the go getter that she is was not going to just sit idle and let Blade have all the fun so she has picked up a couple barrel horses and has hit the rodeo trail. She spends most of her time competing in the CCA/MRCA and Jackpots. Now let’s not forget about the three kids.

Blade and Becky started the Saskatchewan Little Spurs in 2014 for kids 15 and under. It has three rodeos and finals. There are buckles, saddles and prizes up. This was all started to promote the sport of rodeo with the youth. When they started the organization they had about 50 kids but it has now grown to around 150 kids. I think it’s fair to say there will be some good talent coming out of Saskatchewan in the years to come including a few with the last name Young.

In the down time the Young Family like to try and get away to their place in Arizona where they all enjoy some sun and quality time doing what they love, riding horses.

The old saying goes, ‘A family that plays together stays together,’ and I believe the Young’s are on the right track and raising their family up the right way.