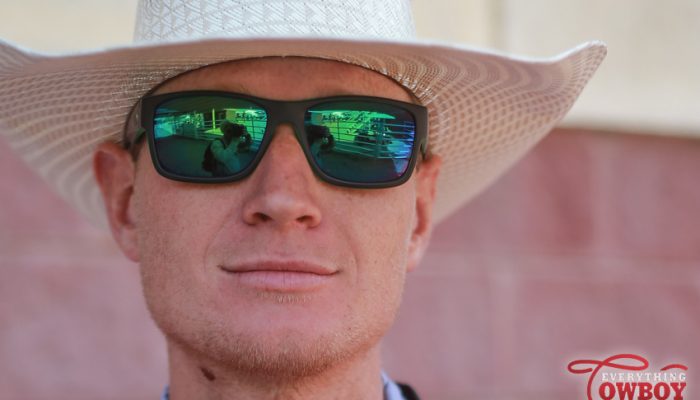 Bullfighter Scott Waye is a familiar face around the Canadian pro rodeo circuit. The veteran cowboy protector can usually be seen shooting the gap between bull and rider or shooting the breeze with cowboys between rides.

Waye has been working CPRA rodeos since he was 18 and since then he has been working hard to become one of the best bullfighters in the business. Now, after 12 years of fending off bulls, the Hand Hills, Alta boy’s hard work has finally paid off.

“I’m pretty excited about it. It’s been a long time coming, so it feels good to finally get there,” said Waye, who this year will have the opportunity to fight bulls at the CFR for the first time in his career.

“I think it’s just kind of a goal when you get approved for your pro card. You just kind of want to be in that group of guys that got selected to the Finals,” Waye said.

While Waye is no stranger to working big rodeos – he regularly works the Calgary Stampede – he said being selected to protect cowboys at the biggest rodeo of the year in the CPRA bears a special significance.

“For me it’s because you’re voted on by your peers. It’s the top cowboys that vote you there,” he said.

“The CFR isn’t just about the year you had. It’s about the career. I feel that you can have a good year and not get the CFR being a young guy. It takes a good five or six years of just consistently doing your job over and over and keeping guys safe.”

He added that being recognized by those guys that he’s charged with protecting is pretty special.

“It’s how I feel you get to the Finals and to me the CFR is special because of that. You know getting voted on by those top guys, that they want you there to protect them is a pretty big deal to me.”

This won’t be Waye’s first trip to Edmonton for the CFR. For the past three years he has served as the alternate bullfighter at the event.

But being an alternate, he said, isn’t even close to being in the arena.

“That is the worst job in the world. You’re just like the backup goalie you’re dressed watching the game,” he said, adding that he’s not going to change anything when he finally steps into the arena at Northlands Coliseum in November.

“For me nothing’s going to change. I don’t get overwhelmed or anything like that. So for me I’m just going to go do my thing. I operate the same if it’s a $1,500 rodeo or a $100,000 rodeo. The bulls really don’t change – they don’t know where they are. The guys try hard so I’m going to try hard too.”

When asked why he thought the cowboys had voted for him, Waye said he thought it was because he prides himself on consistently doing a good job, regardless of the rodeo.

“I think it’s just because of the years of consistently doing a good job. I wouldn’t say that this year was any different than the last three years as far as what I was getting done. I think it just takes time to get to the top of the heap and I guess it’s my time now.”