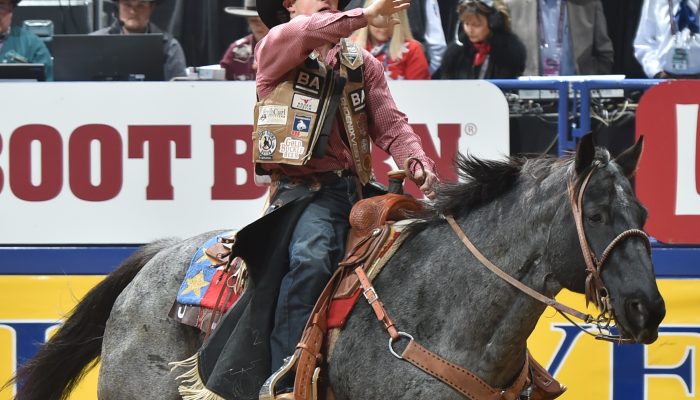 Jake Watson won the round on Canadian Night at the Wrangler National Finals Rodeo in Las Vegas. Photo by Dan Hubbell.

LAS VEGAS — He may have been overshadowed by the night’s conclusion, but Jake Watson in on quite the roll at his second Wrangler NFR.

After winning Round 5 with a huge 92-point ride, fellow Canadians Dawson Hay and Zeke Thurston would win Rounds 6 and 7. Cue Round 8 and it was once again Watson’s turn.

This time, the score was 89.5 on a Canadian bucking horse, on Canadian night in Stampede Warrior from the Calgary Stampede.

“It’s pretty cool, and I know there’s going to be a lot of people cheering for me,” Watson said. “This is our night and that’s kind of how we go at it.”

Last time around, this matchup didn’t go as well.

“I’m not very good at math, but it’s either 23 or 24 points higher than the last time I had her,” Watson said of the match from the Canadian Finals Rodeo in Edmonton. “She was a lot better today and I was much, much better today. It worked out really good. I just picked up on my rein and I think she had a little step sideways or something. It didn’t really surprise me, but it reminded me that I had to ride her and she wasn’t going to do it for me. I had to pick up on my rein and spur.”

Adding another $26,231 to his week, Watson now ranks third in money won in the bronc riding event having earned $83,615 so far in Vegas. In his last appearance in 2016, Watson finished second in the aggregate and fifth in the world to take home $136,006. Traveling partner Thurston won his first gold buckle that year.

Including Thurston’s Round 1 win, Watson and Hay have won five of the eight rounds thus far.

“It’s pretty cool and I actually didn’t even realize that,” Watson said. “I knew that we’d gotten half the rounds so far and hopefully we get seven out of 10. We’re pretty easy going and when we leave the dressing room, we give each other a fist bump and say ‘Let’s go.’ The first one out needs to set the bar high and everybody else can go chase him and try to beat him.”

The only other Canadian catching a check in Round 8 would be Clint Laye for a split of sixth worth $2,115. Laye’s 86 on a horse called Bar Talk pushes his WNFR earnings to $45,962. He’s No. 7 in the aggregate and No. 8 in the world. World No. 2 Orin Larsen was a half-point out of the money while No. 1 Clayton Biglow won his fourth round in a row with his fourth 90-point ride of the week. With Biglow also leading the aggregate, Larsen sits behind by $66,000.

Scott Guenthner ended up one tenth of a second out of the money but has earned $46,103 so far this week. He’s No. 9 in the aggregate and No. 8 in the world after coming in No. 3. J.D Struxness leads the world and Tyler Waguespack leads the aggregate.

In a round that saw four 90-point rides, five-time World Champion Sage Kimzey stole the show with a huge 94 points on SweetPro’s Bruiser. Jordan Hansen was bucked off 2019 PRCA Bull of the Year Hot And Ready.

With the fastest time of the week so far at 13.54, Hailey Lockwood won her second round in a row. Lockwood leads the WPRA world standings and sits No. 5 in the aggregate. Her closest competition at this point is world No. 2 and the No. 2 lady in the aggregate in Emily Miller.

Clay Smith and Jade Corkill lead the charge in the team roping with Driggers and Nogueira trailing closely. Shane Hanchey remains No. 1 in the world standings but sits eighth in the aggregate. Haven Meged is fifth in the world but would jump all the way up to No. 1 should he win the aggregate he currently leads.