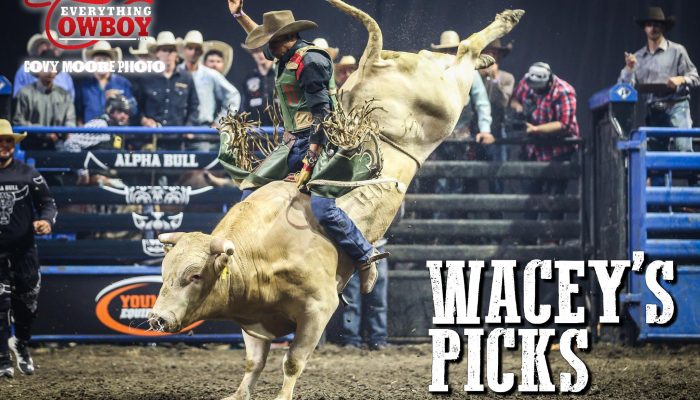 STAVELY, Alberta — The Glen Keeley Memorial PBR is one of the most prestigious events of the year. This is one buckle that everyone is extremely proud to wear.

Friday things get kicked off with the ABBI Canada Finals.

On Saturday, the steak supper kicks things off at 5:00pm with PBR Canada Touring Pro Division competition starting at 7:00pm.

Tickets are $30 in advance at the Stavely Town Office, Frontier Western Shop in Claresholm or Cowboy Country in Nanton.

We’ll see you all there!

Lonnie West vs. Spot On

The No. 28 man in the PBR world standings is having himself a career year and finds himself in the running for a PBR Rookie of the Year title. Lonzo is matched up against Spot On from Slim Wilson, this is a bull we have seen a ton in the short rounds last season. If this bull has his day and ol’ Lon dart does his job we could see some huge numbers here!

Zane Lambert vs. Catch My Drift

Zane is in the hunt for another PBR Canada championship (surprise, surprise) he is currently 7th in our PBR Canada National Standings and just over 1,200 points out of the No. 1 spot. It may seem like a tall task for most, but don’t ever count out the reigning champion. Zane usually finds a away to turn it up this time of year, so he is always a threat. He’s drawn Catch My Drift from the Two Bit firm and this should be a great match for Zane. Catch My Drift should be right in to Zane’s hand and have him sitting pretty in the championship round.

Cawl Braithwaite vs. The Silence

It is so great to see Cawl back on the road and riding good. After a bit of a hiatus he is back and riding better than ever, Cawl has found the pay window more often than not since is return. He has drawn an outstanding bull from the Vold firm called The Silence, I’ve seen this bull a handful of times this season and I think he is outstanding. The Silence should be around to the right and in to Cawl’s hand, if both parties do their job this could be the long round win!

Logan finds himself just outside of the Top 20 in the PBR Canada National Standings and will be looking to make up some ground in Stavely this weekend. He will be tangoing with Big John from the Berezay family, this is a pretty cool bull that can turn back either way if my memory serves me right. There is a another chance for a big score with this matchup.