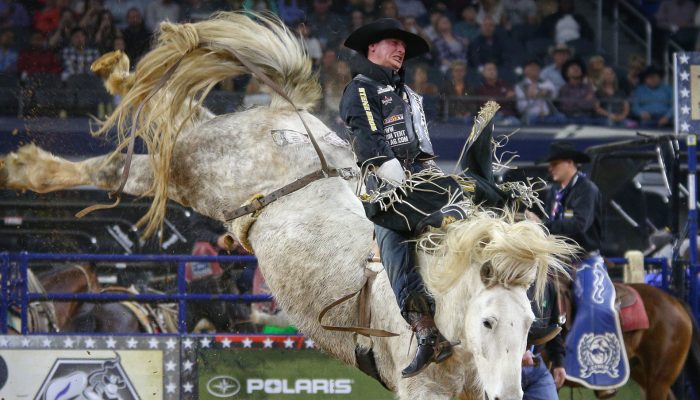 HOUSTON, Texas — With three consecutive Canadian titles to his name, there are only a few more titles that Jake Vold looks to add to his resume.

On Saturday, Vold added another at NRG Stadium.

After an 87 point effort in the ten man round for second place, the Ponoka, AB man put up a huge 90 points on RodeoHouston’s Control Freak from Cervi Championship Rodeo in the shootout round for the win. A check worth $50,000 was added to his $6,000 in previous earnings for a profitable week.

Then there’s Clay Elliott of Nanton, AB. Last year’s Rodeo Houston champion was a few points away from a repeat title. Elliott put up matching 86 point scores. In the ten round the score was on Xena Warrior from the Calgary Stampede. Bailey Pro Rodeo’s Spider didn’t quite provide enough kick for the biggest check but a $20,000 Saturday isn’t too shabby for second place.

Elliott also picked up $7,000 out of Rodeo Austin turning out of the finals to be in Houston. Add that to his $20,000 in PRCA earnings to date and he’s had a winter worth over $50,000 Canadian when those big US dollars are counted up.

Orin and Tyrel Larsen, Layton Green and Jake Watson didn’t make it out of the ten round but all left with another $1,250 this afternoon.