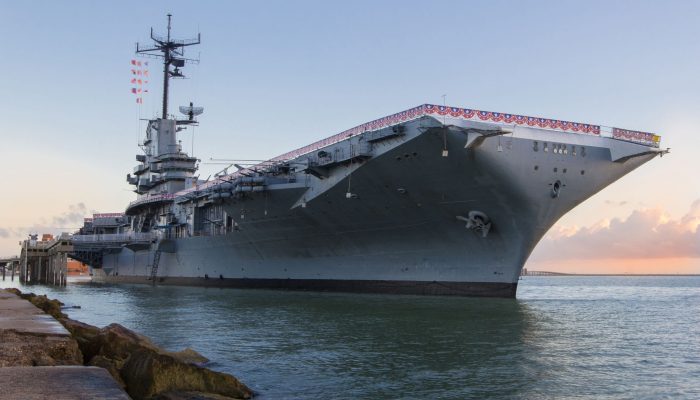 The first-of-its-kind event will be broadcast on CBS Television Network, Sunday, November 22 at 3 p.m. ET or 5 p.m. ET (check local listings).  Additionally, CBS Sports Network will air a special preshow for the special exhibition event on Friday 7 – 8 p.m. ET and on Sunday at 2:30 – 3 p.m. ET.

PBR Air Force Reserve Cowboys for a Cause is an invitational team event featuring five teams of three cowboys, riding to support military members and their families through a new charity initiative.

PBR will construct a bull-riding arena on the 872-foot long launch deck on top of the famed aircraft carrier known as “The Blue Ghost,” bringing in 300 tons of dirt and steel and more than 15 miles of copper and fiber optic cables to support the event and television broadcast. Bucking bulls will be brought on board via the ship’s still-functioning aircraft elevator that brought planes up to the flight deck during battle. Aircraft aboard the ship will be used as set pieces off the dirt

The rosters for the final PBR event of 2020 have been finalized, with the three five-man teams including four Texans and 10 of the Top 20 riders in the PBR 2020 standings.

Team Wrangler will be captained by Dener Barbosa (Paulo de Faria, Brazil), who finished the 2020 season No. 17 in the world with two event wins. He is joined by Texas’ own Ezekiel Mitchell (Rockdale, Texas) who finished 2020 No. 18 in the world, and PBR newcomer Roscoe Jarboe (New Plymouth, Idaho).

Team Pendleton Whisky puts together one of the hottest riders in the league, Derek Kolbaba (Walla Walla, Washington) – who tallied two 90-point rides at World Finals in Arlington last weekend and finished the season ranked No. 13 in the world – with powerhouse veteran and No. 12 in the world Eduardo Aparecido (Gouvelandia, Brazil) and young gun Parker Breding (Edgar, Montana).

The 2020 PBR World Finals Champion and Rookie of the Year, World No. 3 Boudreaux Campbell (Crockett, Texas) leads Team South Point, and will be joined by 2018 World Finals Champion Marco Eguchi (Poa, Brazil) who finished 2020 No. 4 in the world, and Brazilian newcomer in 2020 No. 25 Mauricio Gulla Moreira (Gavio Peixoto, Brazil).

The final three-man squad, Team Boot Barn, is led by Chase Dougherty (Canby, Oregon). Under Dougherty is possibly the hottest team aboard the ship, with the Navajo man, No. 7 in the world standings, Keyshawn Whitehorse (McCracken Springs, Utah) who finished No. 2 at the PBR World Finals, and world No. 16 Cody Teel (College Station, Texas) who went 3-for-5 inside AT&T stadium.

PBR, the first major professional sport to safely return to competition and then welcome fans inside an arena during the COVID-19 pandemic, brought fans a team competition earlier this season. The Monster Energy Team Challenge competed in closed, televised events from South Point Arena in Las Vegas throughout June, and then in mid-July hosted fans in the arena in Sioux Falls, South Dakota, with new fan safety protocols in place.

PBR will bring its industry-leading COVID-19 protocols to Corpus Christi for the event and host a limited number of ticketed fans.