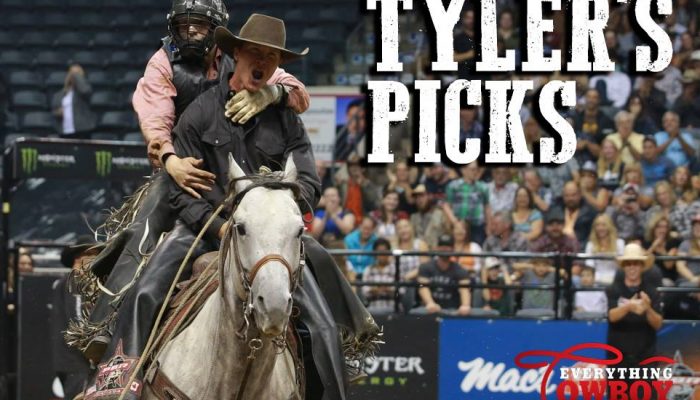 NIPAWIN, Saskatchewan — After a rough night on the picks for Covy in Prince Albert last week, Tyler Thomson has a hot to take over a commanding lead on Friday in Nipawin.

Tyler Pankewitz vs. 1144 Dirty Grandpa – Pankewitz has been riding very well to start the year. I’ve always said there is nobody better than Tyler when he gets on a roll. Dirty Grandpa looks like a pretty nice bull should bring him back mid-pack for the short.

Brock Radford vs. 128 Quags Back – I don’t pick against the bull riders very often cause they tend to hold a grudge, but in this case I know that Brock will use this as fuel. Quags Back is a tough draw that I’ve never seen rode in person. All I’m doing is playing the odds here so I’m picking Quags Back. If Brock can ride him it will be for first in the long round. Hope I’m wrong.

Jordan Hansen vs. 71 West Wind – Can’t bet against Jordan and the riding he’s been doing this past year. West Wind looks to be a nice draw probably not for the round win but he will be solid in the long round.

Zane Lambert vs. 216 Big Shot – Totally the opposite bull for Zane than what Brock has. No pressure Zane but I don’t think anyone has ever fallen off Big Shot. Zane will ride him and maybe win the round here.

Jared Parsonage vs. 037 Canadian Outlaw – Biggest guy on the smallest bull! I know the feeling buddy. Jared can ride so many different types of bulls and that’s why he is so consistent. This little bull is not easy by any means and he is a round winner, if Jared wasn’t 6’8! He’ll get it done for second in the long round.

Who am I kidding! I can’t bet against Brock, he’ll ride Quags Back for the round win.