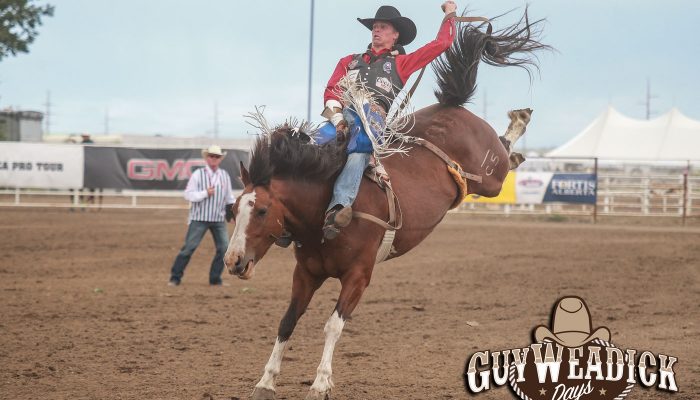 Top stock and cowboys to compete at Guy Weadick Days

Rodeo audiences making their way up to High River for this weekend’s Guy Weadick Days are in for a real treat as some of the best cowboys and stock from all over Canada and beyond prepare to square off over the course of the three-day event.

Some of the best stock C5 Rodeo has to offer will be on display at the annual pro rodeo, including a number of new and returning contenders.

“It’s gonna be an awesome weekend. We’re really excited about quite a few matchups and think it’s going to be just a great rodeo all around,” said C5 Rodeo Coordinator Gillian Grant.

According to Dale Kling, one of the Stock Superintendents for C5, a number of marquee matchups are set to take place throughout the weekend.

It all kicks off on Friday night with a pair of must-see bouts in the saddle bronc portion of the evening, the first being between CFR qualifier Lane Cust and C5’s P198 Big League.

“Big League’s a new horse that was purchased from Dwayne Tillman out of Northern Canada. It looks like one of the matchups that I think could be real good. The horse has been touted as sensational,” Kling said, adding that another Friday night saddle bronc matchup to keep an eye on is the meeting between Inglis, Man. native Tyrel Larsen and T80 Another Sunday.

“Tyrel Larsen with Another Sunday could be the matchup of the whole rodeo. They won Regina, Sask. on Another Sunday. It’s been down South and it’s been performing great.”

Other big-time matchups in saddle bronc over the course of the weekend include Jake Watson aboard V95 Tuxedo Kate and Sam Kelts with 2016 CPRA Saddle Bronc Horse of the Year Get Smart from Northcott Rodeo.

“What’s really going to be spectacular is the set of bulls that are coming to High River and the calibre of bull riders we’ve got coming there,” Kling said.

“The bull riding is something we’re really focusing on this year. We’re known for great horses on both sides of the border and we’ve had great bulls but we’re putting a special effort into it.”

To that end, C5 added a number of new bulls to their stock list this year, some of which have never been bucked in Canada before.

“A lot of these bulls that are competing here are going direct to the Ponoka Stampede and then on to Calgary and K Days, so High River gets the first kick at the cat, so to speak. We definitely are putting a forward a big effort in the bull deal and it’ll definitely show,” Kling said.

Of course, big-time stock tends to attract big-time names, and High River is no exception.

Beau Hill, Garrett Smith, Jordan Hansen, Tyler Pankewitz, Tanner Girletz, Scott Schiffner and many more are set to take a crack at the rank pen of bulls that C5 has assembled for the event.

“With some of the best bull riders in Canada all entered and from the US a couple of World Champions, PBR guys coming up there it should be outstanding.”