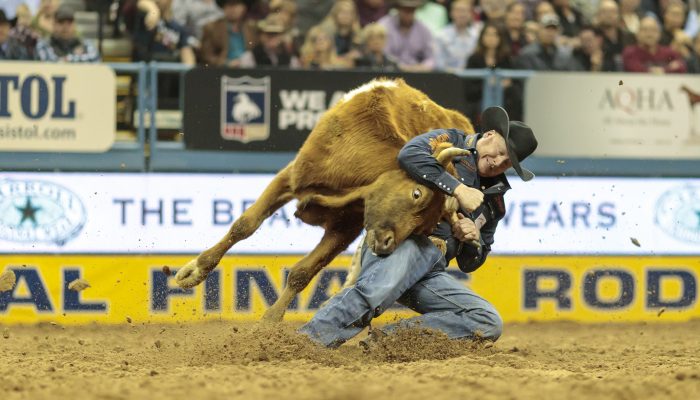 CALGARY, Alberta — In the third installment of our greatest ever series on Everything Cowboy we take a look at the best steer wrestlers ever from Canada.

Of the three lists we’ve done so far, this one includes the most currently active contestants that are on the list.

To make the countdown, we enlisted the help of bulldoggers Chance Butterfield and Craig Guthrie to do Episode No. 75 of COWBOY SH*T with Wacey Anderson and myself. Listen to the full show in the embedded player below or at COWBOYSHIT.ca

Our objective was to rank the greatest steer wrestlers ever from Canada against the best in the world.

To do so, we used the points breakdown below.

Enjoy the list below and make your comments below.

Winning the Canadian Pro Rodeo title in 2011 and 2014, Tanner Milan qualified for his first of two Wrangler NFR’s in 2015, adding the next in 2017. The middle of three steer wrestling brothers, youngest, Straws made the Wrangler NFR in 2013. Elder brother Baillie has hazed for both Tanner and Straws in Las Vegas. Still competing, Tanner Milan has yet to finish his work on this list.

The holder of the record for the most Canadian championships in steer wrestling , which is six, Bud Butterfield is the middle sibling of the Butterfield brothers. He was born July 19, 1930.

In 1966, the Butterfield brothers decided to venture into other business interests. They started a 2,000 head feedlot whereby Tom managed the operation, Brian would purchase the cattle and Bud took care of the mechanical operations.

Winning five Canadian titles between 2008 and 2016, Cody Cassidy created one of the few dynasties in Canadian Pro Rodeo. In 2010 he would make his lone appearance at the Wrangler NFR in Las Vegas.

Three consecutive Wrangler NFR qualifications from 2017 to 2019 and back-to-back Canadian titles have Provost, Alberta man Scott Guenthner in the No. 7 spot on our list.

Lee Laskosky was born in 1958 and raised on the family farm near Viking, AB. Bill Cikiluk inspired Lee to start rodeoing. Mac Mackie from nearby Kinsella was another mentor to him.

Lee saw success on the amateur circuit and in 1982 he turned to the professional ranks. He competed extensively for 15 years, winning the Canadian Steer Wrestling Championship in 1984 and 1986. In 1986 he won the $50,000 at the Calgary Stampede. He also was a Tie-Down Roper which put him in contention for the High Point Award. Four times he qualified for the Steer Wrestling at the National Finals Rodeo.

In 1993 he went into the NFR as the season leader of the world. Lee’s horse “Hammer” was the 2004 Steer Wrestling Horse of the Year. Lee had retired from rodeo when his son wanted to hit the trail. He briefly returned to rodeo, travelling with son Luke, and ended up qualifying for his 13th CFR. When the finals ended that year, Lee sat 3rd in Canada’s standings.

Lee Laskosky fondly remembers family, good horses and great friends to travel with as key ingredients to a successful life and a great rodeo career. Reflecting on his rodeo days, Lee said, “Those were the best years of my life and I can say that without a doubt and with no regrets.”

He followed that up winning the Canadian Pro Rodeo Association’s Cowboy of the Year in 2001.

Sadly, Boggust passed away in 2001 after a courageous battle with cancer. Many of today’s Steer Wrestling competitors credit Todd Boggust with much of their success, stating: “He was there influencing me when I got started.” Todd was a rancher and a cowboy at heart.

Having competed for more than 20 years, Curtis Cassidy is padding his numbers for this list with his seventh Wrangler NFR appearance on the way this December in 2020. Only one man, our No. 1, has more trips to Sing City. Along with the two Canadian titles in 2006 and 2010 the multiple Hi-Point titles in Canada will rank him even higher on our list of the greatest Cowboys ever from Canada when we get to that list.

Mark Roy always knew he wanted to be a rodeo cowboy. Growing up in Fir Mountain, Saskatchewan he moved to Alberta to hone his skills as a Steer Wrestler. In 1991, Mark was named the Canadian Steer Wrestling Champion, setting a CFR event money earning record at the same time.

1992 was a great year for Mark, as he was presented the Guy Weadick award at the Calgary Stampede, won his second Canadian Steer Wrestling Championship then travelled to Las Vegas to the NFR where he took the World Championship in Steer Wrestling. Mark won the NFR Average again in 1996 and retired in 2008.

Mark and Audi reside outside of Calgary, where they enjoy following their son’s in rodeo and football.

Blaine Pederson once stated that there never was any doubt he would become a World Champion, he just didn’t know when it would happen. Along the way to his 1994 World Steer Wrestling title Pederson transformed himself into the Wayne Gretzky of steer wrestlers.

Like Gretzky, Pederson’s talent shone even in his maiden year in professional rodeo. Capturing the first of four Canadian Steer Wrestling Championships and the Rookie of the Year honors in 1982, Blaine proved even then that pressure was the thing he thrived under. A run-off for the Championship that year was the first of many showdowns that would ultimately earn him glory in the rodeo arena.

During his career Pederson not only wrestled steers but roped calves and team roped successfully as well. Blaine qualified for 14 consecutive CFR’s, made five NFR appearances, won two Canadian Hi Point Championships and then walked on stage at the Calgary Stampede as the $50,000 Champion.

Canada also recognized his commitment to his sport by honoring him with the Guy Weadick Award in 1989 and the Cowboy of the Year Award in 1998.

Blaine served on the CPRA Board of Directors in 1992 and 1993 and has taught many steer wrestlers at numerous schools for the past two decades.

Practice and dedication were the two things that made Pederson a stand out among bull doggers. His consistency paid off when he twice won the NFR Steer Wrestling Average, one of rodeo’s most coveted awards. Yet nothing can compare with the culmination of a life long dream and a gold buckle that names you World Champion Steer Wrestler.

Blaine Pederson returned home to Canada the 1994 World Champion Steer Wrestler to be greeted with hundreds of well wishes from rodeo fans everywhere who had cheered on their own steer wrestling ‘Gretzky’ from Amisk, Alberta.

The Canadian Pro Rodeo Hall of Fame recognizes a caring husband and father, an outstanding athlete, talented cowboy and a proud Canadian in Blaine.

This one kind of baffles me so far, Lee Graves is the no-doubt best steer wrestler ever to come from Canada with two gold buckles in 2005 and 2007 to go with ten trips to the Wrangler NFR and two aggregate titles there. He’s also a five-time Canadian Champion with his last competition in the PRCA dating back to 2014. Yet he’s not in the Canadian Pro Rodeo Hall of Fame at this point.

Having been a member of the board of directors for the Hall of Fame in the past, I have to say that putting the super stars of our sport directly into the hall of fame is important in legitimizing the work done by both the hall and the athletes. In any other pro sport it doesn’t take ten years for these stars to make it in, they are first-ballot hall of famers and rightfully should be.

Congrats to Lee for topping this list and for being in the ranks of only a handful of Canadians to ever win the world more than once. Here’s to hoping for 2021.

Thank you to Barb Poulsen, the CPRA, Scott Kaniewski, Carol Lawrence, the PRCA and the Canadian Pro Rodeo Hall of Fame for their content in this article.