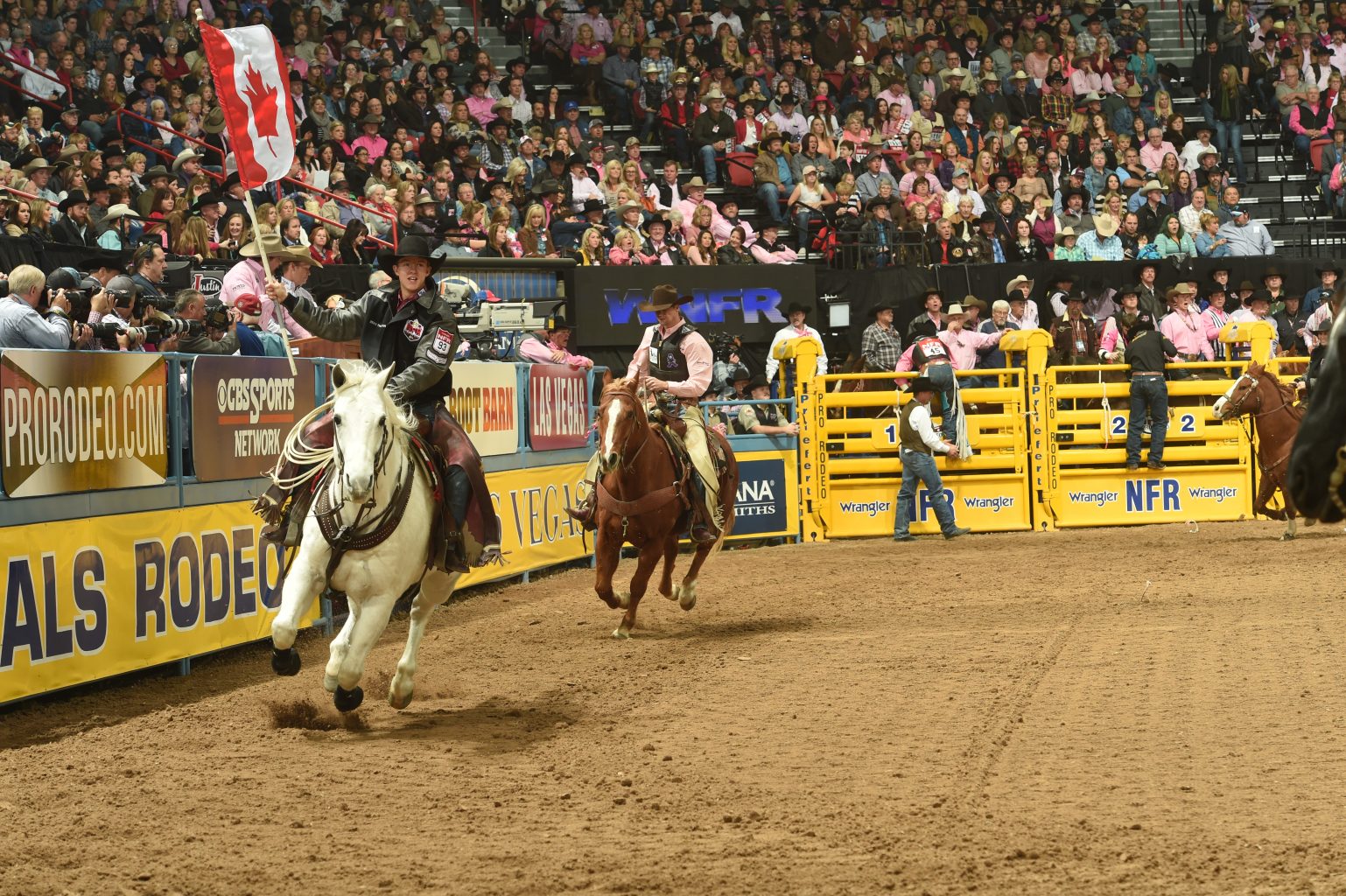 CALGARY, Alberta — Canadians can place their bets on the Lucky 7 in Las Vegas this December. As the 2019 regular season on the PRCA circuit drew to a close, the books showed that’s the number of Maple Leaf born competitors who will be vying for a world championship this year.

The highest money earner of the crew is saddle bronc rider Zeke Thurston, who rode away with the gold buckle in 2016. He collected $176,991 this season, leaving him second in the world race, a little less than $50,000 behind the $224,488 chalked up by leader Ryder Wright.

It will be the fifth consecutive time Thurston has made his winter workplace the Thomas and Mack Centre in Las Vegas.

“All the wins, big or small, are good for your confidence,” said the Big Valley cowboy, as he looked back over the season. “Every little bit of money counts. Overall, I had a really good year, just placed consistently everywhere, it seemed like.”

“I’ve got myself in a position to win a Canadian title and a World title, and that’s about all you can ask for.”

A couple of highlights stand out from 2019 – claiming the W at both the Ponoka Stampede and the Hardgrass Bronc Match at Pollockville. No wonder – those two events alone netted him a whopping $33,000.

“I forty percented both of those deals, won a lot of money out of each of them, put up some big scores and got on some great horses. Both of those were really cool.”

He also notched his first Season Leader title in Canada, after finishing second the last three years, in his quest for a first Canadian championship.

Thurston put an exclamation mark on his regular season the final weekend of the year by winning the Hanna Pro Rodeo on an old friend, Timely Delivery, of the Calgary Stampede.

Thurston also entered the team roping there with Tyler Kraft, who manages the Stampede ranch. Even though they didn’t place, it gave Thurston the coveted Wilf Girletz Memorial All-Around award. Team roping is something Thurston also did at Pendleton this summer, and it’s on his radar to do more of in the future, to potentially qualify for the Canadian and World All Around races.

Thurston’s friend and traveling partner Clay Elliott saw his season end prematurely with a serious injury in May, so he hit the road with Jake Watson and Dawson Hay, who had similar gold buckles goals on both sides of the border.

“They both ride really good, do things right, and they’re hungry, especially Dawson, in his first year for making a big push for the NFR. We had a lot of fun,” says Thurston.

“All three of us ended up top ten in the world, top four in Canada. Everywhere we went it seemed like somebody was winning. I’d like to think the other bronc riders said ‘Dang it!’ when we showed up, because it was going that good,” he chuckled.

The fun will continue in Vegas as the trio storms into town. Watson finished the season with $108,791 for eighth spot and his second NFR qualification; while Hay was just behind him in tenth, with $100,311. That helps him check off a lifelong goal of making his NFR debut.

Scott Guenthner wound up third for the regular season steer wrestling race, with his tally of $102,750. It puts him about $43,000 behind season leader Ty Erickson, and less than $2000 back of the number two man, Hunter Cure. The Canadian champion will be making his third NFR appearance, and also claimed season leader honors for the Canadian standings.  Unfortunately, Cochrane’s Tanner Milan wasn’t able to come through with any cash from his last two PRCA stops, so despite his late season hopes and efforts, closes out the year in 19th place ($67,471). B.C.’s Stephen Culling was 21st ($61,161).

After making his NFR debut in 2017, Jordan Hansen will be back for his second time in Las Vegas in 2019, as he wound up a stellar season in the bull riding. The Ponoka-based cowboy really heated up in August, and after big cheques from Strathmore and the new Pile O’ Bones rodeo in Regina, he showed up in Heber City, UT for the first time. When he was the only one of the entire bull riding roster to make the eight second whistle, he cashed in the entire jackpot of $12,956.

Believe it or not, he managed the same ‘lone ranger’ feat at Puyallup, WA in September, collecting the whole $10,000 semi-finals payout for being the only rider to make eight seconds, pushing his total cheque from there over $18,000. To boot, he logged a 90 point performance on Outlaw Buckers’ Wild Child and was 89 points in the Finals.

“All ten thousand in that eight man round, that was definitely the game-changer for me,” said Hansen. “To be honest I never would’ve expected that there would be only one ride, with the caliber of guys there. It just happened to be one of those days, I guess.”

Hansen didn’t slow down his pace, even though essentially, he had the NFR made.

“If I stay off too long, I don’t end up riding as good. When things are going good, you’ve got to keep up with it. I need to keep getting on bulls, and stay in the groove.”

Hansen closed out the fall in 11th place among the top fifteen bull riders, with $114,747 in his world earnings account, a new high for him.

“Two years ago, I know I didn’t have near as much won, and I had the Finals made in similar timing.”

“This was a lot tougher year, I know that. A lot of guys stepped up. This will be almost a record for the highest amount just to make the NFR. It was one of those years when the top guys kept winning and it made it a lot tougher, that’s for sure.”

Five-time World Champion Sage Kimzey leads the charge for bull riders, with his season tally of $245,455. He’ll also be making his first trip to the Canadian Finals Rodeo in Red Deer.