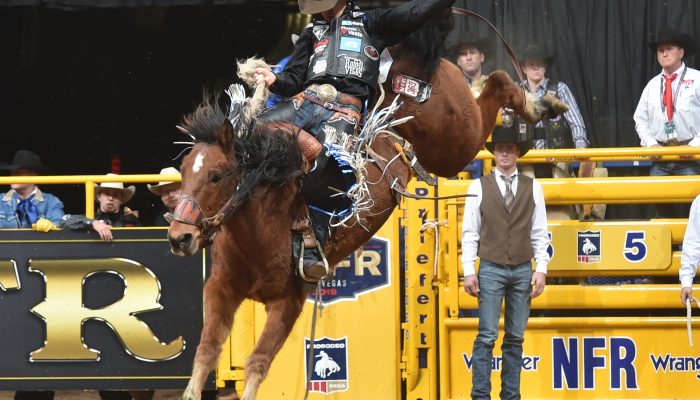 Thurston and Get Smart Team Up for 92.5 points to win Round 7 at Wrangler NFR

Zeke Thurston rides Northcott/Macza’s Get Smart for 92.5 points to win Round 7 at the Wrangler National Finals Rodeo on December 10th, 2019. Photo by Dan Hubbell.

LAS VEGAS — It was a matchup for the ages.

It was, but that’s been said pretty much every time these two have teamed up over the past few seasons.

Together, 2016 PRCA World Champion Zeke Thurston and 2019 bucking horse of the year Get Smart, teamed up to win Round 7 with a score of 92.5 points, half a point off the arena record set here by Billy Etbauer on another couple Canadian bucking horses.

“That horse I’ve been on probably seven or eight times and it’s gone good every time,” Thurston said. “It’s one of those horses that, when you draw him, it could be his day or your day. It’s easy to underestimate him, because he’s not very big but bucks big and he has a big heart. I’ve won a lot of money on that horse. He’s pretty special.”

“For him to win the world (PRCA World Saddle Bronc Horse of the Year) this year and to be able to draw him at the Finals and ride him is pretty fun,” Thurston said of the great Northcott/Macza horse.

.@zeke_thurston picks up his second round win on night 7 at the #WranglerNFR on Canadian horse Get Smart. We caught up with Thurston who remains No. 1 in the world standings. pic.twitter.com/B8XYpuEO5D

Team Canada has won three straight rounds now after Jake Watson‘s 2 in Round 5 and Dawson Hay‘s win in Round 6. Thurston also won Round 1.

“Jake, Dawson and I travelled together this year and we had a blast,” Thurston said. “We had a lot of fun rodeoing, all had good years, won lots and made the finals, which was pretty special. It’s Jake’s second time and Dawson’s first and for us three to come here and do good just makes it all the better. Rodeo is a huge family and having guys like that you get to be around all the time is pretty cool.”

Despite a no-score in Round 6, Thurston remains No. 1 in the world with a $16,000 lead after this Round 7 win. To date, he’s No. 4 in the aggregate while No. 2 Ryder Wright is splitting tenth but took second tonight in Round 7.

“It’s just about getting things going,” Thurston said. “I started off good and placed here and there. I had a couple nights of bad luck too, but you just look past it and keep rolling on. You just stick to the basics and they’ll tell you who wins at the end.”

Orin Larsen is having his best WNFR ever. Through seven rounds he’s won $80,231 to rank No. 4 in the aggregate and No. 2 in the world about $39,000 back of No. 1 and round 7 winner Clayton Biglow. On wednesday it was Larsen’s third 90-point effort of the week, this one on Big Stone Rodeo’s Mayhem as a re-ride for second place in the round. It’s going to take a few more big rides and scores for some big checks and likely a slip from Biglow for Larsen to earn his first gold buckle. Clint Laye split sixth for $2,115 after an 86.5 in Round 7. He’s earned a respectable $43,846 thus far.

In the steer wrestling, Scott Guenthner had yet another tough go, getting his steer down in a time of 11.8. He’s got all seven down but No. 11 in the aggregate and No. 7 in the world.

Jordan Hansen was bucked off once again and hung up after the whistle. Unless something freaky happens with a bunch of ground money, Sage Kimzey has all but cinched up his sixth-straight world title.

Hailey Kinsel-Lockwood won her first round of the week, same as Kimzey and both reigning World Champions. Kinsel stopped the clock in a time of 13.60. First-time NFR qualifiers Tyler Milligan and Scott Jorgensen won the tie-down and bulldogging at 7.5 and 3.4 respectively while team ropers Cody Snow and Wesley Thorp took the team roping at 3.6.

Round 8 on Thursday night in Canadian night. For results and more, visit WranglerNetwork.com