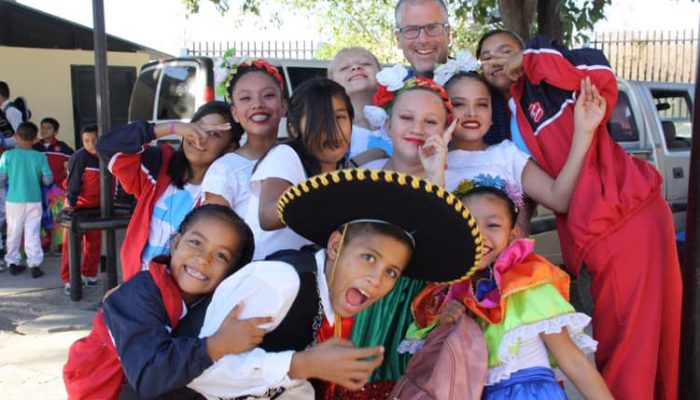 The Lupe Cup Challenge – In Support of The Gems of Mazatlan

CALGARY, Alberta — There’s a guy that a lot of you may have seen at numerous random rodeos, CFR’s and PBR events, but might not know.

He’s the guy in the back centre of this picture and he’s a great friend of mine. I haven’t met anyone else with a heart as big as his, ever. Every time we talk, I learn something new about him, something else incredible. Maybe it’s a new story from his travels as one of the top pyrotechnicians on the planet, working Super Bowl’s, Olympics, NBA All Star Games the NHL or his time spent in Mazatlan, Mexico with the kids at two different orphanages or something we’re up to on the PBR’s Monster Energy Tour here at home.

I’m writing this today to let you know about my friend Peter Gebraad, co-founder of The Gems of Mazatlan and the Lupe Cup Challenge.

After arriving in Mazatlan in November of 2014, Peter and Melinda Gebraad quickly came to realize that Mazatlan would be their winter destination for years to come, thanks to the beautiful smiles and hearts of the kids at the Salvation Army Children’s Home.

As Melinda loves to cook, she started a weekly lunch program to get the kids some hearty, healthy meals on a regular basis as they mostly live on rice, beans and corn tortillas.  Making several connections over the winter brought in many volunteers to buy groceries and prepare the meals. The lunch program has been so successful and the volunteer base continues to grow so the Gems now provide awesome lunches three days per week from November through March.

Pete and Melinda also took over raising funds for the dental program and recruit volunteers to take the kids to their appointments and hold their hands when necessary. Sometimes the two just hang out with the kids in the waiting room, playing games and keeping them occupied while waiting for their turn.

After an incredibly intense and thorough application process, the Canadian Government recognized The Gems of Mazatlan as a charitable organization and granted it status on May 1, 2016. This allows the Gems to issue tax deductible receipts for Canadian donations.

Since 2014, Peter and Melinda have built relationships with the other children’s homes around Mazatlan including Refugio Mazatlan, Ciudad de los Ninos and Floreser. Most recently, in the spring of 2019 in partnership with Un Futuro Mejor, The Gems of Mazatlan secured property and plans to open a new transition home this summer called Mi Futuro, to ensure these kids transition into successful adulthood.

Peter and Melinda believe that with the support of friends, family, sponsors and donors they can continue to improve the lives of these incredibly resilient children.

After seeing both the Salvation Army Children’s Home and Ciudad de los Ninos in November myself, I realized even more that these little troubles we think we have at home are nothing compared to what these kids have to deal with on a daily basis.

This brings me to my next point.  After getting to know Peter and Melinda over the past few years, they invited me to compete on September 7th of this year at the Lupe Cup.

Lupe is the nickname of a young girl that lives at the Children’s Home. Pete and Melinda noticed that her sister called her Lupe when they play together. Her real name is Guadalupe but most people call her Lupita.

Lupe embodies the spirit of all the children at the home.  She does her chores, she loves to hug, she loves Melinda’s cooking, she’s happy and she smiles a lot.

Peter and Melinda have invested their hearts into these children and have decided that they’re not going to turn a blind eye to their needs. Children need clean water. They need working toilets. They need a nutritious diet. They need people to care.

The Lupe Cup is a trophy that symbolizes their passion. It symbolizes the spirit of these absolutely amazing and resilient children, but most of all it symbolizes that we together with our friends and family will not sit silently while others are in need.

Former competitors at the Lupe Cup from the rodeo and bull riding industry in Canada include Jason Davidson, Brett Gardiner and Rhonda Snyder. You may have donated to any of these three over the previous four years of the Lupe Cup but I’m asking you today to support me or any of the other competitors this year.

You can find out more about the Lupe Cup and The Gems of Mazatlán or donate now by visiting https://melindagebraad.wixsite.com/thegemsofmazatlan