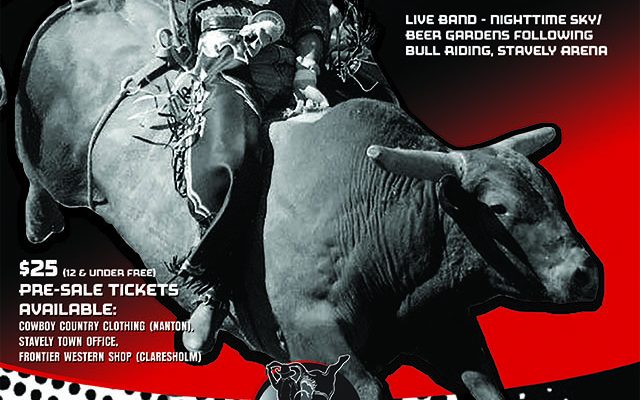 STAVELY, Alberta — There aren’t many bull ridings anywhere in the world that have the same feel as the annual Labour Day weekend  Glen Keeley Memorial Bull Riding in the Stavely Arena.

I remember riding there, well getting on a bull there, and thinking there was something pretty special in the air. I think I know what it is too, it’s the family that surrounds the event.

Glen Keeley passed away in the year 2000 doing what he loved, bull riding, at the sport’s highest level. Since 2004, the Keeley family and members of the community have come together to celebrate Glen’s life with this event.

It’s not just another bull riding. In recent years Friday has featured a bucking bull futurity and junior bull riding. On Saturday morning the committee hosts a golf tournament while a steak supper is served at 5pm before Saturday night’s marquee.

This year though, there’s someone missing.

Donna Keeley, Glen, Clayton, David, Teresa, Jayson, Justin, and Brad’s mom, passed away this June but her memory will live on in all of our hearts. This one is for you, Donna.

On Saturday night there’s more to ride for in Stavely than just the buckle and the money; there’s the legacy that goes with the Keeley name and what it stands for.

Each of these bull riders will be battling it out for their spot in the illustrious record book of the Glen Keeley Memorial PBR.

Friday isn’t only a bucking bull futurity. It’s the first ever ABBI Canada Futurity Finals featuring $5,000 in added prize money to the top young bucking bulls in the country fighting for their shot to compete at the ABBI World Finals in Las Vegas.

Based on the draw, these are a few of the guys I think have the best shot. Based on heart, it’s anyone’s game. Magic happens here.

Will Purcell vs. Y70 Cuckoo Kong – Ridden only four times in 17 recorded outs, this Girletz Bull has helped put up some big scores in 2016 so far. In his last five outs alone, Ty Pozzobon, Cody Coverchuk and Tyler Harr have all rode the bull to scores of 87.5, 89 and 86 respectively for two event wins. Will probably should have been out East on our PBR Monster Energy Canada Tour these past two weeks as he’s in the top 30 in Canada currently. I expect to see him on tour if he tames this bull. I think he can do it too but we will see on Saturday night.

Wacey Finkbeiner vs. 303 Tragically Hip – I didn’t know 303 from the Big Chief firm so I did what I do every other time I find myself in this situation. According to the stats, Tragically Hip has been ridden once in two outs. That ride was caught on tape too featuring Tyler Harr putting up 84.5 points on the red brockle faced bull. A right hand spinner is nothing the number five man in the PBR Canada Standings can’t handle. There aren’t as many points available for him to catch up to Ty Pozzobon, Dakota Buttar and Cody Coverchuk here in Stavely but they all count.

Justin Lloyd vs. 234 Arnie – I thought I would have seen Justin connect for a win this year by now. If I remember right I don’t think he’s won an event since Lloydminster, SK in 2013. That’s going to change mighty soon. Arnie is a great bull from the Wild Hoggs to draw in the first round. A black and white spotted muley, he’s only been ridden once in three outs on paper so far. That one ride was made by number one man Ty Pozzobon on his way to the Innisfail win back in July. Maybe history will repeat itself for Lloyd on Saturday? You won’t know unless you buy and ticket and come watch!

Douglas Duncan vs. Z6 Big Fudge – I don’t know the full story here but Douglas has slipped down a few spots out away from the Built Ford Tough Series since the summer break started back in May. After a pair of weekends out east to no prevail, Douglas has doubled down for Saturday. With as badass as he rides, Duncan has the ability to win first and second. Big Fudge from the Girletz’s has been ridden three times in seven outs. Most notably, Thor Hoefer tamed the beast for 84 points on his way to win Marwayne back in April. Look for Douglas to break his dry spell either way.

Scott Schiffner vs. 36 Smoke Show – Courtesy of 2015 Glen Keeley Memorial Champion Jesse Torkelson: “Smoke Show has a bag full of tricks and has got Scott on the ground a couple times in the past. He’s one of the best bulls we have in Canada and if Scott does his job we’re going to see a long round win and possibly the high score of the event. There’s something about this event that makes great bull riders like Scott step up and make great bull rides. I’m saying 88+ points for a round win and a steak supper for me.”

Tickets for the 2016 Glen Keeley Memorial PBR are $25 for adults, 12 and under are free. They are available at the Stavely Town Office, Cowboy Country in Nanton or Frontier in Claresholm. For more, visit www.GlenKeeleyMemorial.com


The following is the draw for the Glen Keeley Memorial PBR in Stavely, AB on September 3rd, 2016 starting at 7:00pm MST. 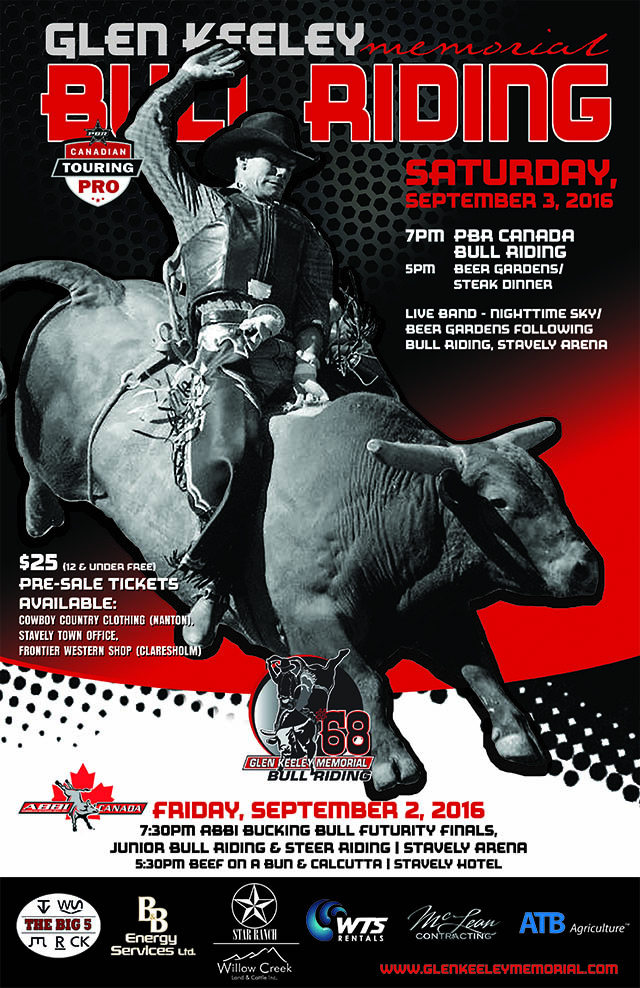