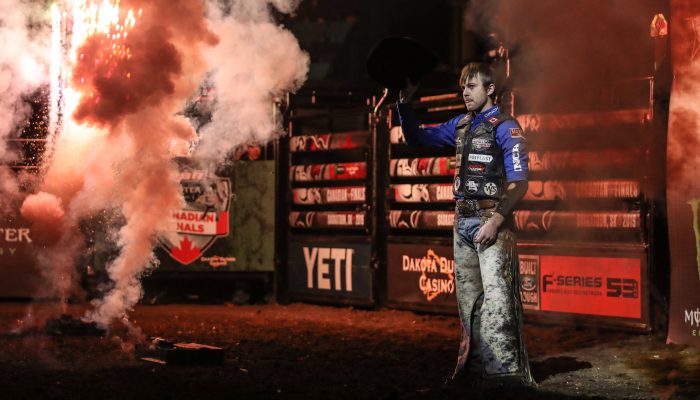 ARLINGTON, Tex. (February 10, 2022) – Ahead of the 2022 PBR (Professional Bull Riders) Global Cup USA, presented by Monster Energy, the PBR today announced the complete five-rider rosters that will represent each of the six teams inside AT&T Stadium as they compete for national pride, the very dirt they ride upon, and the title of “Toughest Nation on Dirt.” A veteran Team Canada will be led by two-time Canadian Champion Cody Coverchuk (Meadow Lake, Saskatchewan) and 2020 PBR Canada Champion Dakota Buttar (Kindersley, Saskatchewan).

The fifth edition of the PBR Global Cup, the only nation vs. nation bull riding competition, will make its third stop at AT&T Stadium in Arlington, Texas on March 5, 2022. The team tournament debuted in Edmonton, Alberta, in November 2017, visited Sydney, Australia, in June 2018, and made subsequent stops in Arlington in February 2019 and 2020.

The 2022 PBR Global Cup USA will feature six teams representing Australia, Brasil, Canada, Mexico, and the United States. For their home-nation advantage, the USA delegation will field two squads via the Eagles and all Native American Wolves.

At the 2022 PBR Global Cup USA, each team will be comprised of five competing riders, all selected by the nation’s coach.

The one-day event will feature two rounds of competition, where three riders from each team will attempt one bull. Throughout those rounds, every rider from each team must attempt a minimum of one bull. Following the initial rounds, each team will select one rider to attempt the nation’s final bull in the bonus round. The 2022 PBR Global Cup USA Champion will be the team with the top combined score through their seven outs.

In late January, PBR announced the coaches who have been tasked with leading each team.

While Coach Dunn led the selection process for the Team Australia roster, the nation will welcome Eddie Fisher (Mackay, Queensland, Australia) to the coaching staff. He will lead Team Australia inside the home of the NFL’s Dallas Cowboys, architecting the team’s rider vs. bull matchups, due to a conflict preventing Dunn from travelling stateside.

Team Australia is the lone contingent yet to field a complete roster. Due to injuries sustained my initial Team Australia members, Dunn will announce the final rider that will compete for the nation in the coming weeks.

The 2022 PBR Global Cup USA will mark the first iteration of the event since 2020 when Team Canada rode to a fourth-place result. Historically, Team Canada has twice finished a national best third. They registered the bronze efforts at the inaugural event on home soil in Edmonton, Alberta, in 2017, and again in 2018 when they event travelled to Sydney, Australia.

Two-time and reigning PBR Canada Champion Coverchuk and 2020 title holder Buttar headline the Canuck roster. For Coverchuk he made his lone appearance on the squad in 2017, while Buttar, who will be competing for the first time since a groin injury sidelined him from the final day of the 2021 season, will be making his fifth trip to the event to represent the Maple Leaf.

Parsonage and Radford have both earned three prior selections to Team Canada, while Hansen was a standout for the team in his two consecutive selections in both 2019 and 2020.

Action for the 2022 PBR Global Cup USA, presented by Monster Energy, gets underway on Saturday, March 5 at 5:45 p.m. CST in Arlington, Texas, at AT&T Stadium.

Adding to the blockbuster weekend, via a landmark partnership between PBR and Teton Ridge, following the 2022 PBR Global Cup USA, presented by Monster Energy, The American will take over the home of the NFL’s Dallas Cowboys on Sunday, March 6 starting at 12:00 p.m. CST.

The American and PBR last united for a historic weekend of Western sports at AT&T Stadium in 2018. Throughout the weekend, PBR set a record for the highest-attended, single-day event in its history, hosting more than 46,000 fans inside AT&T Stadium for the elite tour Major.

Tickets for both events are on sale now and can be purchased at ATTStadium.com or SeatGeek.com. Tickets for both events start at just $20, taxes and fees not included. While individual event tickets are available for purchase at varying price levels, fans can save up to 20% by purchasing weekend combo packages to experience both Saturday and Sunday.

For fans wanting to make this one-of-a-kind weekend even more memorable, VIP tickets are available for both the 2022 PBR Global Cup USA, presented by Monster Energy, and The American. Guests can enjoy premium seating closest to the action, question-and-answer presentations, behind-the-scenes-tours and much more. For more information or to purchase VIP tickets and premium experiences, eventgoers can visit SeatGeek.com.

PBR is the world’s premier bull riding organization. More than 500 bull riders compete in more than 200 events annually across the televised PBR Unleash The Beast tour (UTB), which features the top 35 bull riders in the world; the PBR Pendleton Whisky Velocity Tour (PWVT); the PBR Touring Pro Division (TPD); and the PBR’s international circuits in Australia, Brasil, and Canada. PBR’s digital assets include PBR RidePass on Pluto TV, which is home to Western sports. PBR is a subsidiary of IMG, a global leader in sports, fashion, events and media. For more information, visit PBR.com, or follow on Facebook at Facebook.com/PBR, Twitter at Twitter.com/PBR, and YouTube at YouTube.com/PBR.