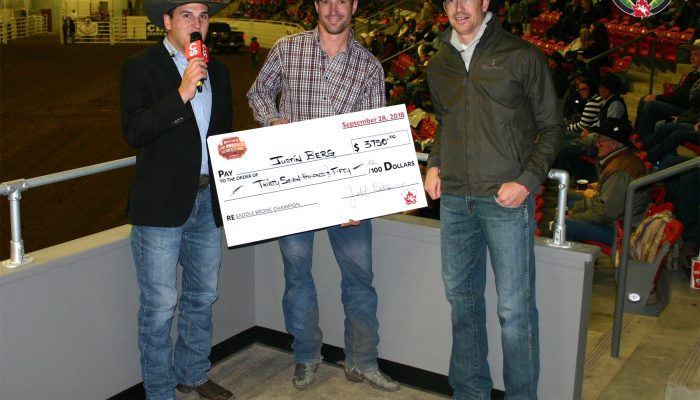 Every year, the Grass Roots Final provides high drama as some dreams are realized and others are crushed.

The 2018 edition of the season-ending event at Stampede Park in Calgary might be the gold standard as major changes were the order of the day in almost every event.

Jacob Stemo typifies what can – and did – happen at the two-day Final. The Bashaw, Alberta bareback rider entered the weekend with a huge mountain to climb as he sat $1600 out of a CFR qualifying berth. Stemo won the opening round Thursday night with an 84.5 on Duffy Rodeo’s Bay Street for $1200 then added 81.5 in round 2 for 166 points on two head and the average win for another $2500. That success propelled Stemo from 13th to 11th in the Canadian standings, just ahead of reigning Canadian champion, Seth Hardwick, who fell to 12th place. Pascal Isabelle dropped to 13th with only Hanna Pro Rodeo remaining on the schedule.

Not to be outdone in the drama department, saddle bronc riding veteran, Justin Berg, also made the leap to 11th place in the Canadian standings – this time from 15th place – as he placed in both go-rounds and won the average for a $3749 payday to punch his ticket to his 8th CFR.

“I’ve been in pressure situations before,” the Camrose cowboy commented. “I just try to break it down to one horse and one ride.”

Perhaps the most suspenseful race continued to be in the steer wrestling with game-changing performances from Curtis Cassidy and brothers, Dallas and Derek Frank. The world’s number one steer wrestler made one of the biggest moves at the Grass Roots Final as he climbed from 12th to 6th and assured himself of CFR qualifications in two events (steer wrestling and tie-down roping). The Donalda, Alberta bull dogger split 2/3 in the first round, added a second place finish in round two for the average win and a cheque of $4218.

Both of the Frank brothers parlayed second go-round and average earnings to move into the CFR conversation – Derek in 11th place; Dallas in 12th – dropping Layne Delemont and Harley Cole (again, unofficially) just outside the CFR cut-off.

And in the team roping event, big changes were also afoot. On the heading side of the box, Jesse Popescul and Brett Buss were the major movers with Popescul going from 13th to 8th place in the standings and Buss from 14th to 12th, leaving two time Canadian champion, Dustin Bird, and Dawson Graham on the outside looking in as they head for Hanna.

On the heeling side, shifts were even more seismic as Riley Wilson catapulted himself from 17th to 10th place ($2500 in Grass Roots earnings) while Wyatt Eirikson saw his Grass Roots haul of $3437 carry him to 12th place and a slender $26 lead over 2016 World champion, Jeremy Buhler, for the final CFR qualifying berth. Buhler and Dillon Graham both dropped out of the 12-man CFR roster pending Hanna results.

At the other end of the standings spectrum, Maple Creek, Saskatchewan bull rider, Jared Parsonage, staked his claim for the season leader crown with an impressive Grass Roots win. Parsonage was the only bull rider to get two head ridden on the weekend to win the average (and with the ground split money, a total of $6562.50) which moved him past Zane Lambert and 2016 Canadian champion, Jordan Hansen, to the top of the season leaderboard.

In the barrel racing, Abilene, Texas cowgirl, Angela Ganter, continued her impressive run at Canadian rodeos as she “forty percented” the field with back to back go-round wins and the average title for a $5000 payday.

Carstairs, Alberta tie-down roper, Kyle Lucas, who has enjoyed success at the Grass Roots final previously, placed in both rounds and won the average ($4687.50) en route to the 2018 Grass Roots title.