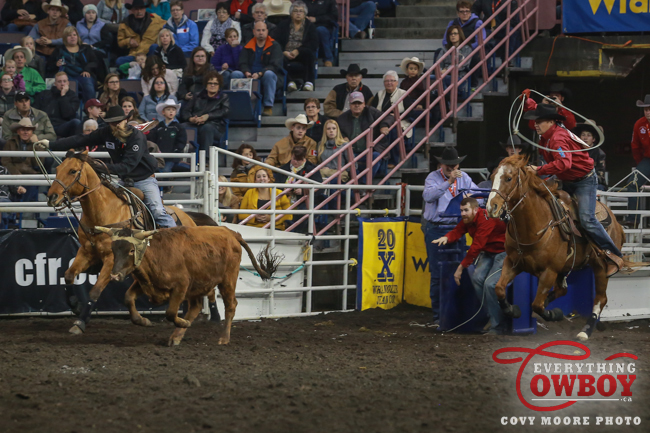 Simpson excited to take part in first ever NFR

The Wrangler National Finals Rodeo is the rodeo world’s biggest stage. Just qualifying for the coveted December showdown is a dream that not many cowboys get to experience, regardless of where they hang their hat. But for one duo of Canadian team ropers, that dream will finally come true this year.

Not only that, but when Jeremy Buhler and Levi Simpson ride into the arena at the Thomas and Mack Center in Las Vegas this December, they’ll be making Canadian rodeo history.

“It’s pretty exciting. I hope that it’s like a new standard. That Jeremy and I have hopefully raised the bar and that some more Canadians will follow in our footsteps,” said Simpson about being a member of the first all-Canadian team roping duo to qualify for the prestigious event.

It was a tense finish to the rodeo season for the duo, who will also be roping at the CFR in Edmonton this year.

“I was still pretty unsure until it was officially updated because I’m qualified in 14th in position and there were definitely a few guys that were capable of moving ahead of me in the standings. So it was just kind of sitting around waiting until that last day of the rodeo season to make it official that I was in,” Simpson recalled.

But when the PRCA officially released the list of headers and heelers earlier this month, the relief finally set in.

“It was kind of a feeling of relief and excitement and joy, but relief a little bit as well that the hard work that my family and I have put into the last four years on the road trying to accomplish that had finally come through,” he said.

A perennial contender for the CFR, Simpson has been dreaming of roping in Vegas for most of his life. Despite that the cowboy said he wasn’t the kind of guy who looked at the standings all year.

“Throughout the year I try not to pay attention to the standings and stuff like that. I try and focus on my job at hand and try and have a goal of making the finals and getting to usually $75,000 for the team roping is kind of the benchmark of making it.

“So just kind of a goal of getting to that and not really worry about what anyone else is doing.”

While Simpson didn’t quite make that $75,000, he made the cut in 14th to qualify for his first ever WNFR. The perfect way to cap off a great year for the Alberta cowboy, as he and his wife welcomed a baby girl earlier this year.

Simpson said he’s spending the next couple of weeks before the first weekend of November at home to spend some time with his young family.

“It’s been a long year on the road so it’s pretty nice to be home for a little bit and spending some quality time with them.”

Simpson and Buhler are back in action the first weekend of November when they head back down South to take part in the Columbia River Circuit Finals. Then it’s back to home soil as they take part in one last hurrah at Northlands Coliseum in Edmonton for the Canadian Finals.