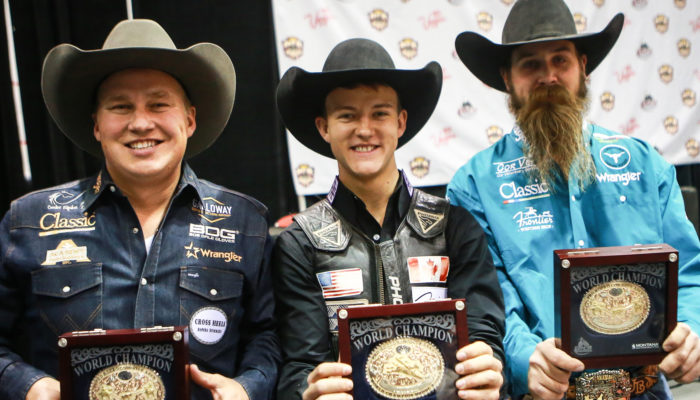 Levi Simpson, Jeremy Buhler and Zeke Thurston won both the world titles and WNFR Aggregate titles, all for their first time.

Coming into the final performance, Simpson and Buhler ranked seventh and sixth on their respective ends but a split of the go round win and a couple misses from teams ahead of them in the aggregate meant they would prevail. Saturday alone was worth $90,000 a man thanks to the $67,000 aggregate check and $23,000 from the split of the round.

“We knew there was a mathematical chance, but with the guys roping behind us, we figured we’d win some money and that was it. Then we won the average and I was jumping for joy,” Simpson said.

Coming into the NFR in 14th and 12th respectively, Simpson of Ponoka, AB and Buhler, of Arrowwood, AB were of course ecstatic about the win.

“Never been better!,” the team said in unison.

“This is close to the day my daughter was born,” Simpson said. “Now they can Fear the Beard – and you will never be able to shave that. Are you shaking? I’m shaking. I’ve never had this much excitement.”

What does it take to be the first Canadian ever to win a PRCA world title in the team roping?

“Hard work, dedication and a lot of support from family here and back home in Canada – my wife literally put her life on hold – and our sponsors,” Simpson said, holding his gold buckle to his chest. “Whether we had a good run or not, the texts and phone calls were the same every night.”

“I cried, It’s been a long trail but this is amazing,” Buhler said.

For being only 22 years old, there’s not much Zeke Thurston hasn’t done yet in the rodeo business. Yesterday he had two Calgary Stampede titles and one from RodeoHouston to his name.

Today? He can add World Champion to the list.

“It’s awesome; I knew there was a chance and everyone has a chance – but to realistically have a shot, I knew I had to ride good and be consistent,” Thurston said. “The horse I had, I knew I could place good and luckily it worked out. She had been around a long time, and does the same thing every time – she circles to the left. I can’t even tell you how I feel, there’s no feeling to compare it to. I didn’t know if It (winning the world and average) was true or not at first, but in the hallway the camera crew told me, and they were right. It’s a beautiful buckle, – to get the average at the NFR is a big deal, but the world is huge.”

“I’m sure I’ll spend it somewhere, it spends fast,” Thurston said. “I just built a house and am moving in soon. I’ll have to do something with it to avoid getting a ding on taxes – maybe buy cows or land.”

Even with that huge number at the end of the year, the second-year pro won the title by less than $3,000.

“Man there’s been guys who lost by a hundred (dollars) and I threw that down on blackjack,” Thurston said. “A few thousand (dollars) can happen, even if you only placed third at a rodeo.”

Thanks to Wrangler for the following pair of videos.