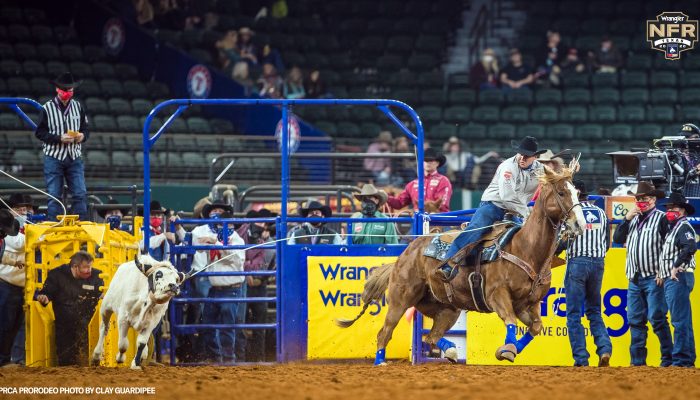 Levi Simpson is the lone Canadian to have earned more than one check so far at the 2020 Wrangler NFR. PRCA ProRodeo photo by Clay Guardipee.

CALGARY, Alberta — Through four rounds at the 2020 Wrangler National Finals Rodeo (WNFR) in Arlington, Texas, only one Canadian has earned more than one check.

Getting the flag in a time of 4.9 with heeler Shay Carroll, the team split fifth for what ends up being 60% of $5,500 a man. Why 60%? Because that’s what the payout is this year, that is unless the finals makes more money throughout the week, the actual money for contestants can go up. At minimum it will pay $6,000,000 rather than the $10,000 is has been.

For world titles, points are being used at the WNFR, based on the 2019 payout for those who weren’t aware yet. So tonight, Simpson and Carroll earned 5,500 points each towards the world title race in their respective events.

Through for rounds at the #WranglerNFR, Levi Simpson is the lone Canadian to earn more than one check. He and partner Shay Carroll split fifth on Sunday night with this 4.9. pic.twitter.com/A2OG9ApvYL

Winning Round 4 in the team roping was a 4.2 from Brenten Hall and Chase Tryan.

Larsen was 80 points in Round 4 while three-time World Champ Tim O’Connell took first with 90.5 on Pop A Top from Fettig Pro Rodeo. Coming in No. 3, Larsen has slipped all the way down to No. 9 in the world standings, despite having the best mustache possibly at the entire WNFR.

Cassidy got his steer down in a time of 4.9 but a 4.5 was last hole. Jacob Talley won the round, chalking up the fastest time of the week at 3.4.

Schmidt’s heeler, Hunter Koch ran out of rope and the two got yet another no-time.

Thurston made the whistle on Delta Force and started out a ride that could have won the round. Getting behind at about four seconds, the second half of the ride was a battle, ending up with Thurston marked only a 9 on a 22 point horse by one of the four WNFR officials. The score total tallied up to 72.5 points, far out of a paycheck.

Ryder Wright won his second round of the week, this one after an 89.5 on Sun Glow from Vold Rodeo.

Home-state athlete Adam Gray won Round 4 in the tie-down roping, with a time of 7.8.

Looking for her third-straight WPRA World Title, Hailey Kinsel and Sister crossed the line in a 17.09 for the win in the barrel racing in Round 4.

After not being able to get out on his first bull, Ty Wallace got a re-ride opportunity on a bull called Lipps, capitalizing as the last man out on the night at 89.5 points for the win in Round 4. Sage Kimzey, in search of his seventh-straight gold buckle, finished sixth. He’s still No. 5, trailing Ky Hamilton, who finished third on Sunday night, in the No. 1 spot by just under 35,000 points. Wallace is now No. 2, rookie and Gary Leffew protege Colten Fritzlan is No. 3 and All-Around champ Stetson Wright is No. 4.

Round 5 of the 2020 Wrangler NFR takes place on Monday, December 7th, starting at 6:45pm CT. For full results, standings and more, visit ProRodeo.com.