Move over ‘Cowboy Christmas’. There’s a new rich rodeo run on the summer calendar now and some contestants really capitalized on the extra opportunities for cash.

Plenty of money flowed the Milan way, and lots of buzz too. That came when youngest of the three steer wrestling brothers, Straws, set the bulldogging world on its ear with a pro rodeo record tying 2.9 second run! That puts him in the books with Ralph Nelson (1981), Darby Roy (1988) and David Gibson (1994), who also broke the three second mark. Milan’s timing was perfect, because there was no better place to do it than at Northlands Coliseum during the new, rich K-Days rodeo, where he was able to ride away with $9,983, to vault all the way from 29th in the standings to top five.

“When I stood up and looked at the clock and it was 2.9, my heart about dropped,” Straws Milan confessed to CFCW rodeo reporter Tim Ellis, seconds after making the historic run.

Big brother Tanner Milan came nowhere close to that quick at Edmonton, but that was OK, because he’d done his share of winning earlier that weekend at Nampa, ID. Milan collected $11,108 from the Snake River Stampede by tying for first in the opening round, winning the second round outright, and getting top dollars in the average, logging just 6.9 seconds on two runs.

Milan was trying out a horse from Justin Miller called Jerry, while keeping the family’s treasured mount Smoke in Edmonton. As well, Tanner did some homework and found out his first steer was a little slower.

“The start was really fast there, so I just saw a little extra and made sure he was going ahead of me. Curtis (Cassidy) was hazing for me. The steer kind of stepped to him, and Curtis did a heckuva job. He brought him right back to me and everything worked out good.”

Milan came back in the short round with another steer they’d been fast on before.

“I had to be 3.8 to win it, and I didn’t want to back off or anything. I darn sure ran at it, and I wasn’t sure on the barrier, but I got a heckuva good start, and he was just a great steer on the ground.”

Adding in another $800 from Salt Lake City, Milan sits seventh in the world and can start thinking about being in Las Vegas in December.

“That was a really, really good hit for this time of year. I still need to keep going at ‘em, but it damn sure helped me out and set me up really good for the rest of the year.”

Just to add to the family celebration, Baillie Milan also placed on the weekend, picking up fourth, with a 4.4, in Kennedy, SK for $1,013.

Also making a big move from her winnings at Western Canada’s richest one-header rodeo was barrel racer Crystal Christman, who was receiving plenty of hugs and tears and congratulations, moments after making a 14.726 second run at the Coliseum on her eight-year-old paint she calls Lenny, the lion-hearted.

“I’m not sure it’s sunk in at all yet,” confessed the Okotoks barrel racer, who had been 32nd in the standings with just $3,838. “I just needed to show up and let my horse work, and I did, and that’s awesome.”

“We started off the spring with a bang and kind of got lost in expectations of things. He’s not seasoned, so I had to kind of back off. I was trying too many different things, and just not letting him do his job. So we got it figured out. I just let him do his work and he’s amazing.

Christman, who is an equine vet and works with many rodeo horses, earned $11,446 at Edmonton, and she’s a good bet to be back there in November after skyrocketing up to third in the standings. Not bad, considering she was called into Edmonton as a last-minute replacement, while she was competing in Morris.

“Really what it means is I’ve got a chance to give him the opportunity to go on and do some good things. I don’t know about the numbers, but it just feels real good.”

One of the biggest money winners both sides of the border was saddle bronc rider Layton Green, who won Nampa, Morris and finished second to his buddy Zeke Thurston at Edmonton, for a whopping $22,319 total.

“I can’t complain about much. It’s being going pretty dang good,” grinned the 23-year-old from Meeting Creek. “Seems like everywhere I go it’s working out, so that’s all a guy can ask for.”

“I’m not going to say ‘whoa’. I’m going to keep my foot down and keep going as hard as I can.”

The memories of last year’s disappointment from finishing just outside the world’s top 15 and missing the NFR linger.

“It lit a fire instead my stomach, and I told myself I wasn’t going to miss it again. I worked my butt off all winter and all spring and I guess it’s starting to pay off.”

Meantime for the third time in three weeks, Thurston and the Northcott Macza legend Get Smart teamed up for a winning combination, as they completed a rodeo trifecta by winning Edmonton with an 88.75, for a $13,310 boost to Thurston. He also got $4,394 out of Nampa, and then he advanced to the gold medal round at the renewed Days of 47 Rodeo in Salt Lake City. While Cody DeMoss won the gold medal there, Thurston finished third overall, and still tallied another $14,400 to his rodeo account.

Tuf Cooper was happy to be back at Northlands for the first time since his Canadian tie-down roping championship in 2010 and he made it count. He and fellow Texan Blane Cox split the K-Days pot with 8.1 second runs, for $9,616 each. But Logan Bird ($5,853) and Riley Warren ($4,738) helped pad their positions at the top of the Canadian standings by finishing 5th and 6th respectively.

Canadian champions Dustin Bird and Russell Cardoza kept up their winning team roping ways at Edmonton, snagging first with a 4.2 second run at K-Days for $9,983 apiece. But World champions Levi Simpson and Jeremy Buhler weren’t anxious to give up their driver’s seat in the Canadian heading and heeling standings, and their split of third place cheques of $6,933 each kept them strong in the win column. However, Roland McFadden and Devin Wigemyr inserted themselves into the conversation at the top of the race by finishing second at Edmonton ($9,151) and Morris ($1,228), and also placing at Kennedy ($448).

Stateside, Simpson and Buhler cashed in at Nampa, to the tune of $3,481 each, while being the only other Canadians to advance at the Days of 47 event to the final round. They came up empty there, but still got $2,800 for their go-round efforts.

“Unreal, that horse is awesome,” praised the Wyoming cowboy. “That’s a bucker, that’s my type of horse. He’s had my motor running for a week. I’ve rode him ten thousand times already,” Vezain confirmed, about his mental preparation. “It was everything I dreamed of and more.”

Edmonton paydays also made a big difference for the season for Colin Adams, back after bicep repair, and Dylan Bilton.

Others who had a big weekend included steer wrestler Chance Butterfield ($9,151), who thought he had the Edmonton victory with his 3.3 until Milan’s record run, but Butterfield also finished third at Morris ($1,855), which was taken by Layne Delemont in 3.8 seconds ($2,303). Morgan Grant did manage to place at all three rodeos, for a $4,345 boost.

Saddle bronc specialist Kolby Wanchuk came back off the injury list with a bang, by winning Kennedy with an 83 on Big Stone’s Pelican Brief.

When it came to the bulls, World champion Sage Kimzey has been matching moves with Zeke Thurston. Fresh off his Calgary win, like the Big Valley bronc rider, he also took top dollars at Edmonton, with an 88 on C5’s Big Dip ($12,761).

“Alberta’s been pretty good to me,” grinned Kimzey. “This is the biggest week of the year. With the money there’s to be won at all these big rodeos, it’s a big week.”

It got even bigger for Kimzey when he when back to Salt Lake and claimed the gold medal there as well, for another $52,667.

Timothy Lipsett was excited to notch the runner-up hole at K-Days with an 87 on Moe, and the $10,382 will shoot him from 26th up to the top ten in Canada. Scott Schiffner cashed in for $8,849 in third place, while Jared Parsonage proved he’s ready to be back in action after his injury time-off. He was sixth in Edmonton $3,365 but he also finished second at the Oyen bull riding for another $4,413 (on two entries). Marcos Gloria was the big winner there ($4,787), while the Morris title went to Wacey Finkbeiner ($2,459) and Tanner Girletz took Kennedy ($1,257).

One other Canadian note from the U.S. trail saw Clay Elliott tying for second place in the saddle bronc in Ogden, UT for $3,271.

The Canuck count in the top fifteen of the world standings is holding steady at eight. Jake Vold is 14th in bareback, with Orin Larsen outside looking in at 18th, about $6,000 behind 15th spot. Steer wrestler Tanner Milan is seventh, with traveling partner Scott Guenthner in 12th. World Champions Levi Simpson and Jeremy Buhler are there, with Simpson in 8th, and Buhler holding down tenth hole. Zeke Thurston, at second place in the saddle bronc standings, is closing the once large gap on leader Jacobs Crawley. There’s just $12,000 separating them now. Layton Green is all the way up to fifth, with Clay Elliott at 13th. Bull rider Jordan Hansen is just outside the 15 door in 17th, but he’s a mere $181 behind the 15th place earnings. 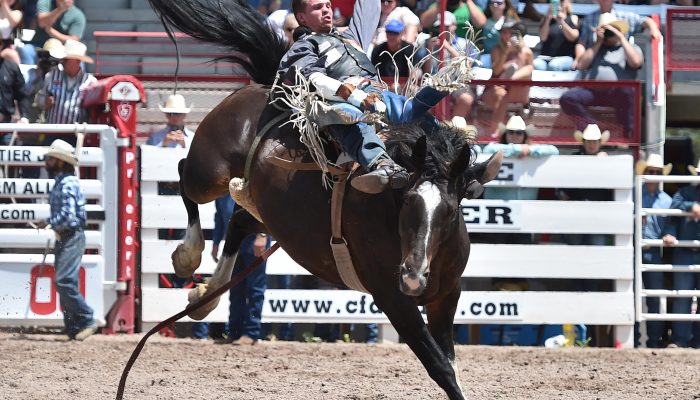 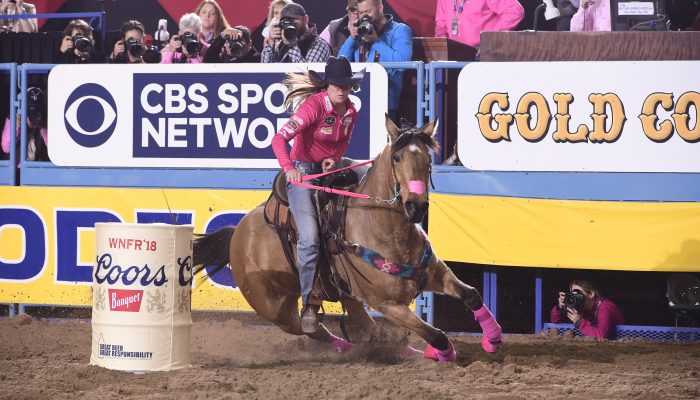