In Photos: Winning the World in more ways than one

But then I got thinking about that. While the Indy 500, or Daytona 500 or some of the biggest auto races this continent has to offer may have some massive celebrations, this one was so much more personal. I don’t know Levi Simpson, Jeremy Buhler or Zeke Thurston personally. My first full year of rodeoing was certainly filled with making friends with the steer riders, novice guys and the bull riding fraternity. But, these men represent our nation in a way that no other sport can. The 2016 Wrangler National Finals Rodeo will go down as the biggest, most emotionally charged and fun celebration I have ever been a part of, let alone been able to cover.

So in saying that, here are some of my favourite images from a couple hours of watching some fellow Canadians laugh, cry but most of all, beam with pride to remind the world why Canada holds the heart of rodeo. 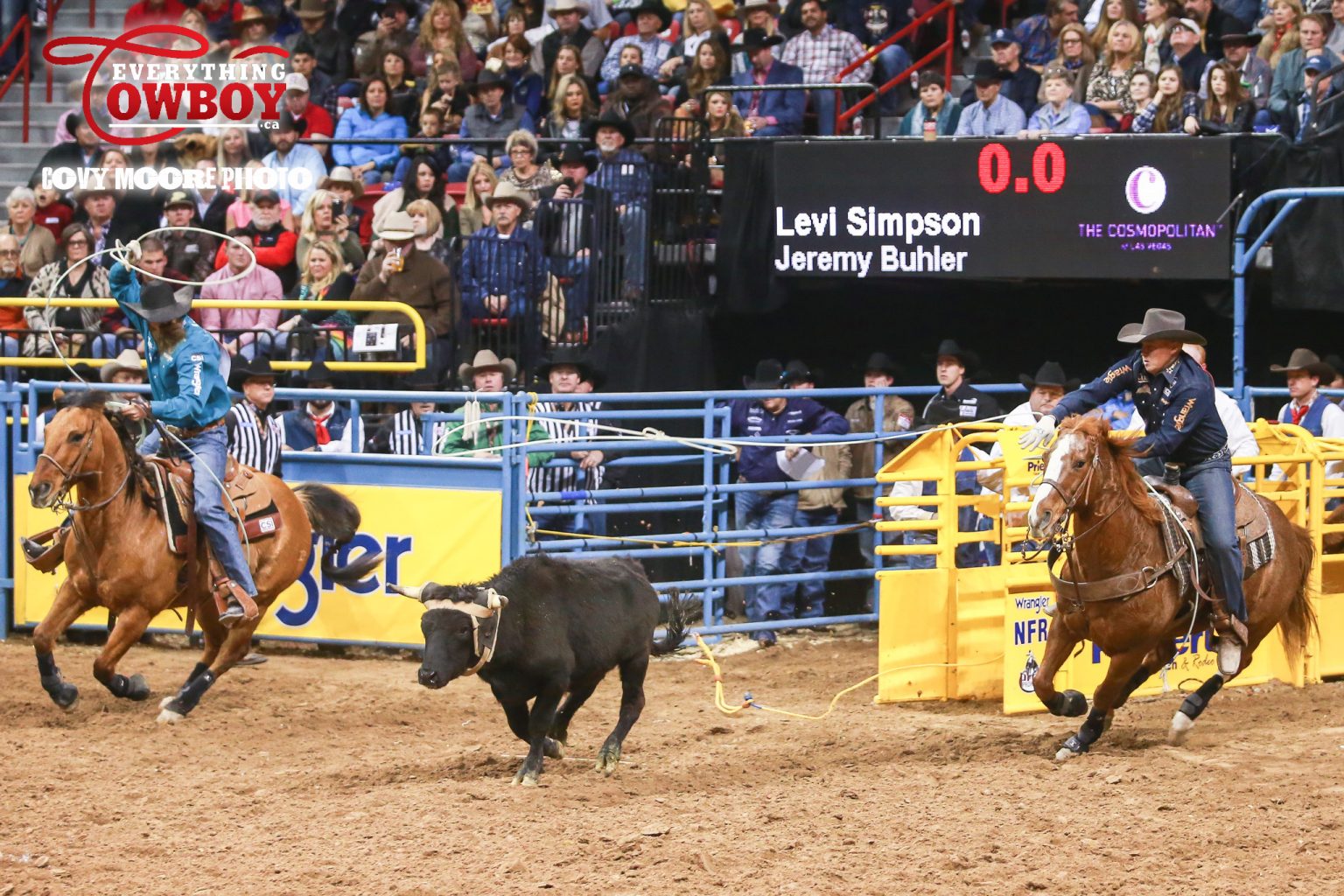 It all starts inside the arena each night. I will admit I have never been a fan of photographing team roping. Photographically it isn’t the prettiest of events rodeo has to offer. Until I got down here. The nightly messages about how “rank” my photos from team roping were made me not only appreciate how people felt about being able to see their friends and neighbours competing on the biggest stage rodeo has to offer, but realized that the scale of this event is a whole lot bigger than my “photographic opinion” of an event. One of the best comments I got to see on social media was from one person who reposted a good number of images of Levi throwing his loop leaving the box, and it eluded to the timing screen behind him. “0.0 + 0.0 = 0.0” 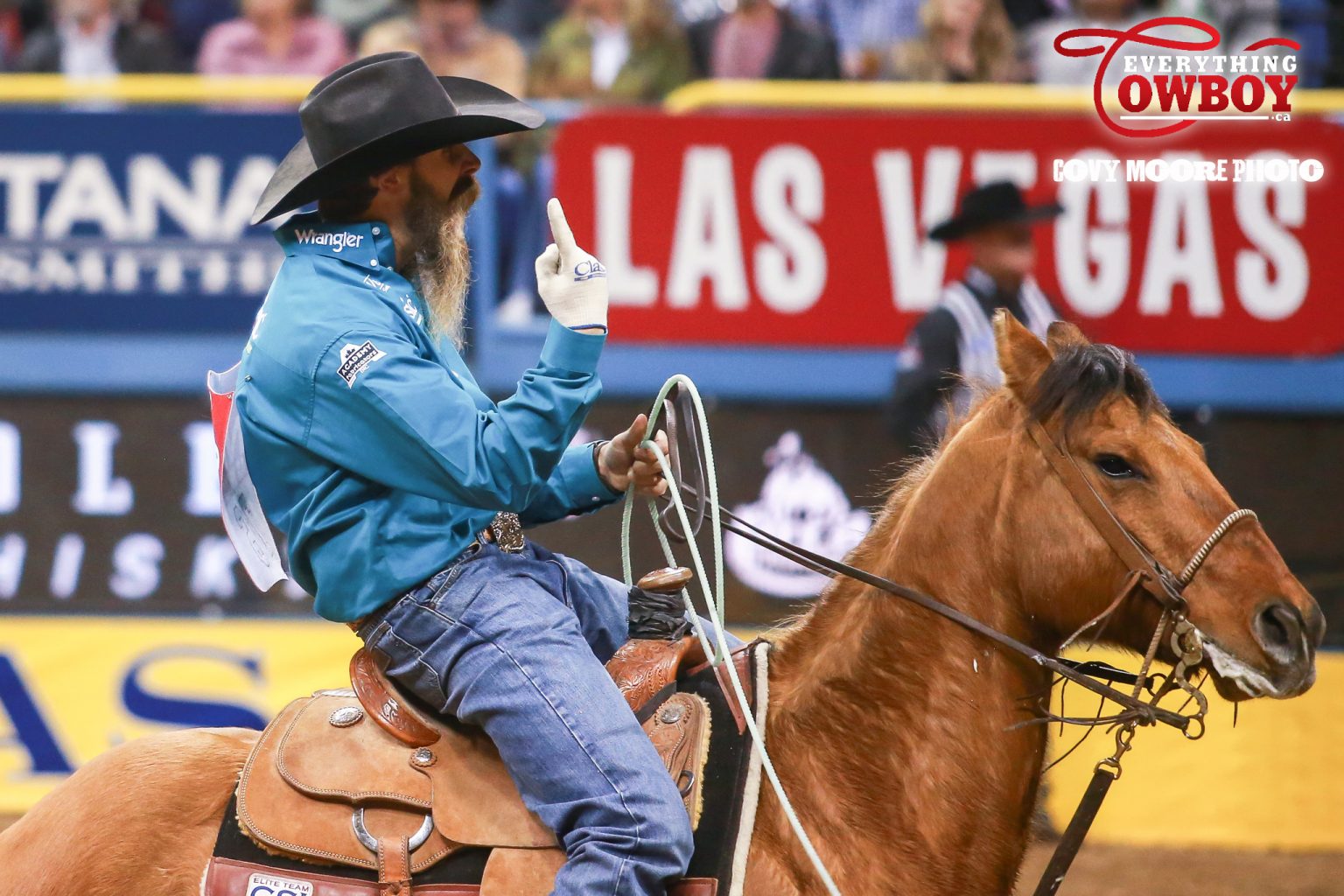 Celebrations inside the arena are definitely something that don’t happen along the rodeo trail typically too much. Winning event buckles is one thing, but I can say wholeheartedly that each and every rodeo competitor going down the road is aiming at one buckle in particular. With the excitement out of Levi and Jeremy this week, you could tell that there was a gold buckle on the line. 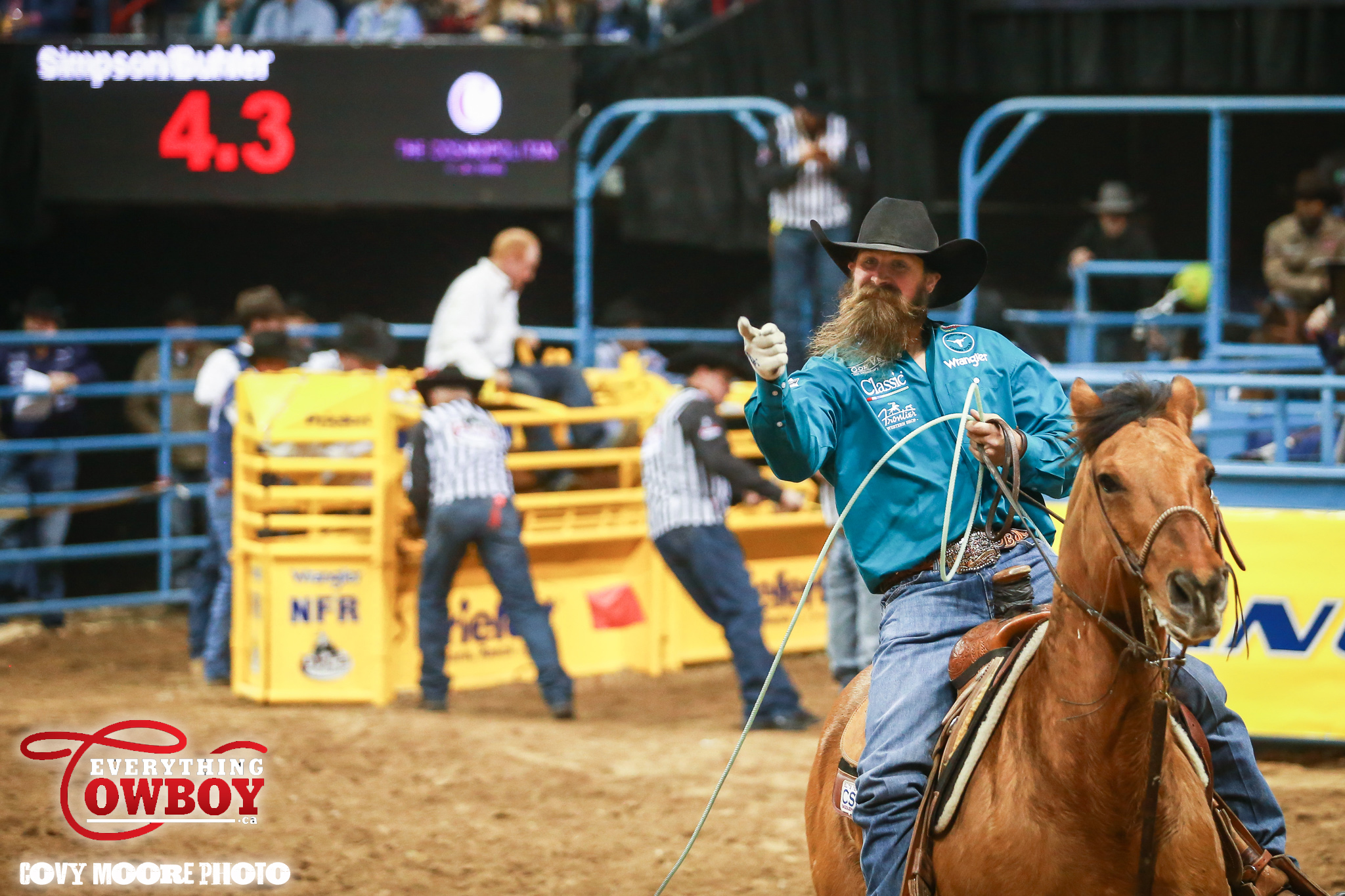 And celebrate they did. They had to sit through a couple more teams, but the average was all but locked up in this moment. And I think Mr. Buhler knew it.

The WNFR Champions accept their buckles. I will happily admit that in ten days of shooting, I really didn’t pay attention to the numbers. I assumed that their one miss on the week hurt them in the overall world standings, but a friendly tap on the shoulder and quiet mention from Kendra Santos (PRCA Media Relations) “The Canadians just won the world” had me very excited. But there was still a couple Canadians to cover before I could begin to worry about celebration images. 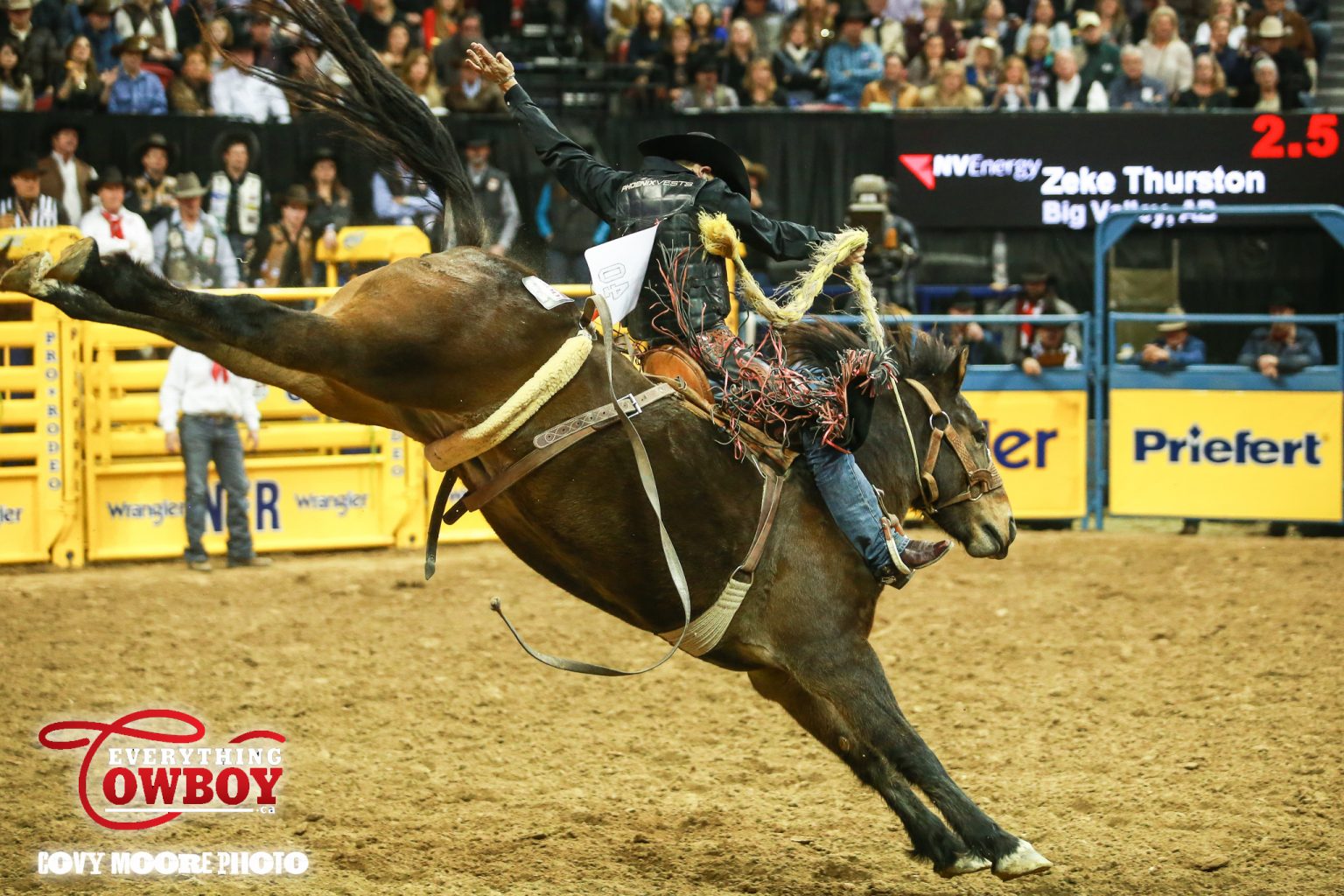 Again, not knowing the numbers and who was where and what needed to happen for any Canadian to take home the World Title, I simply photographed the three Canadian’s remaining in the bronc riding then left to go cover our team ropers….little did I know. 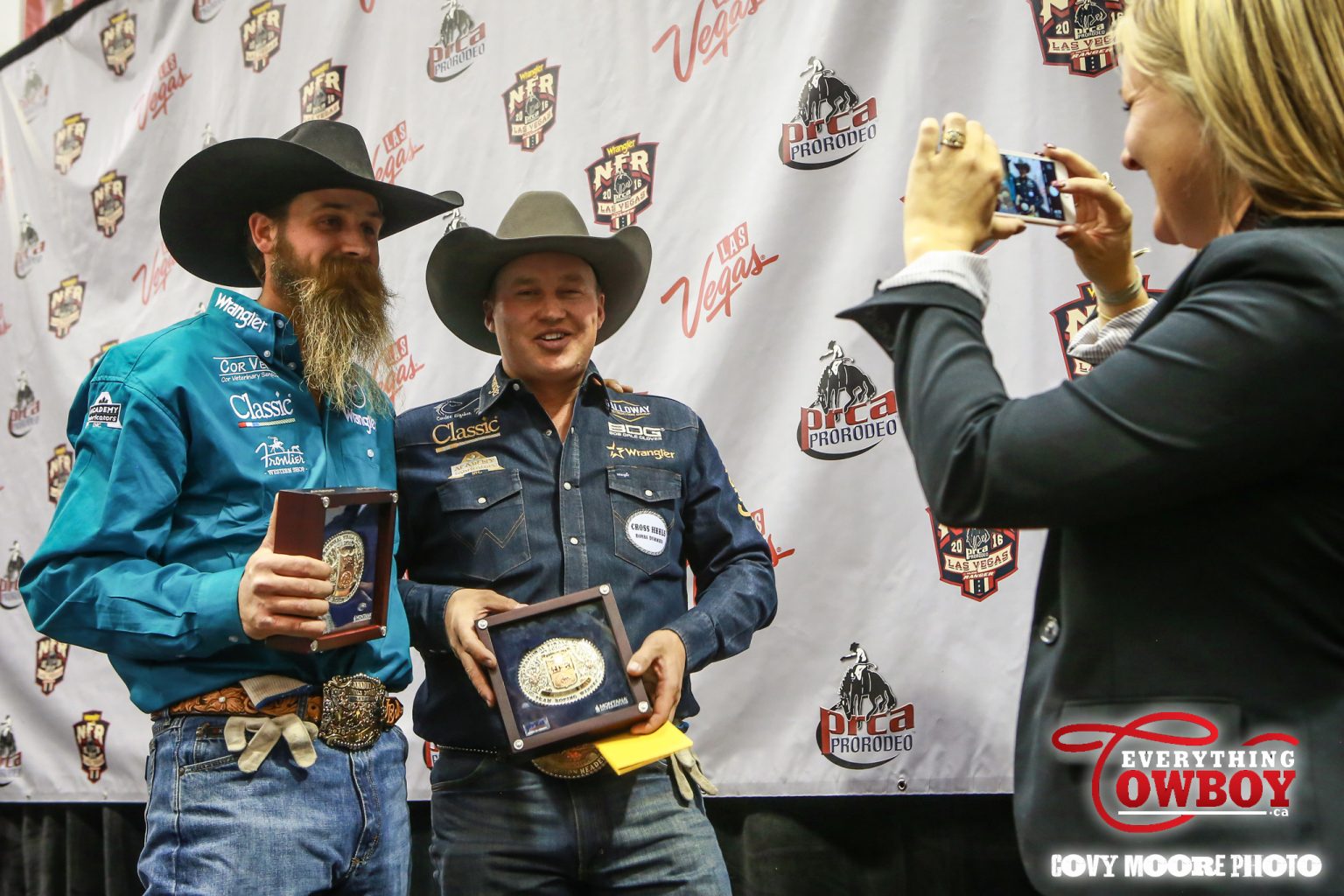 It’s quite a long walk to get to the media room from the arena. A good two minute hike. But by the time I got there, it was announced that Zeke Thurston was the World Champion Saddle Bronc rider. Stovin alerted me when I got to the media room, and my body told me to be professional, but I let out the first “WOOOO” at the top of my lungs, the first of many to occur in that room that night. This moment was shortly after a quick interview, where I got to hear these two humble guys talk about how they almost don’t believe it is real. 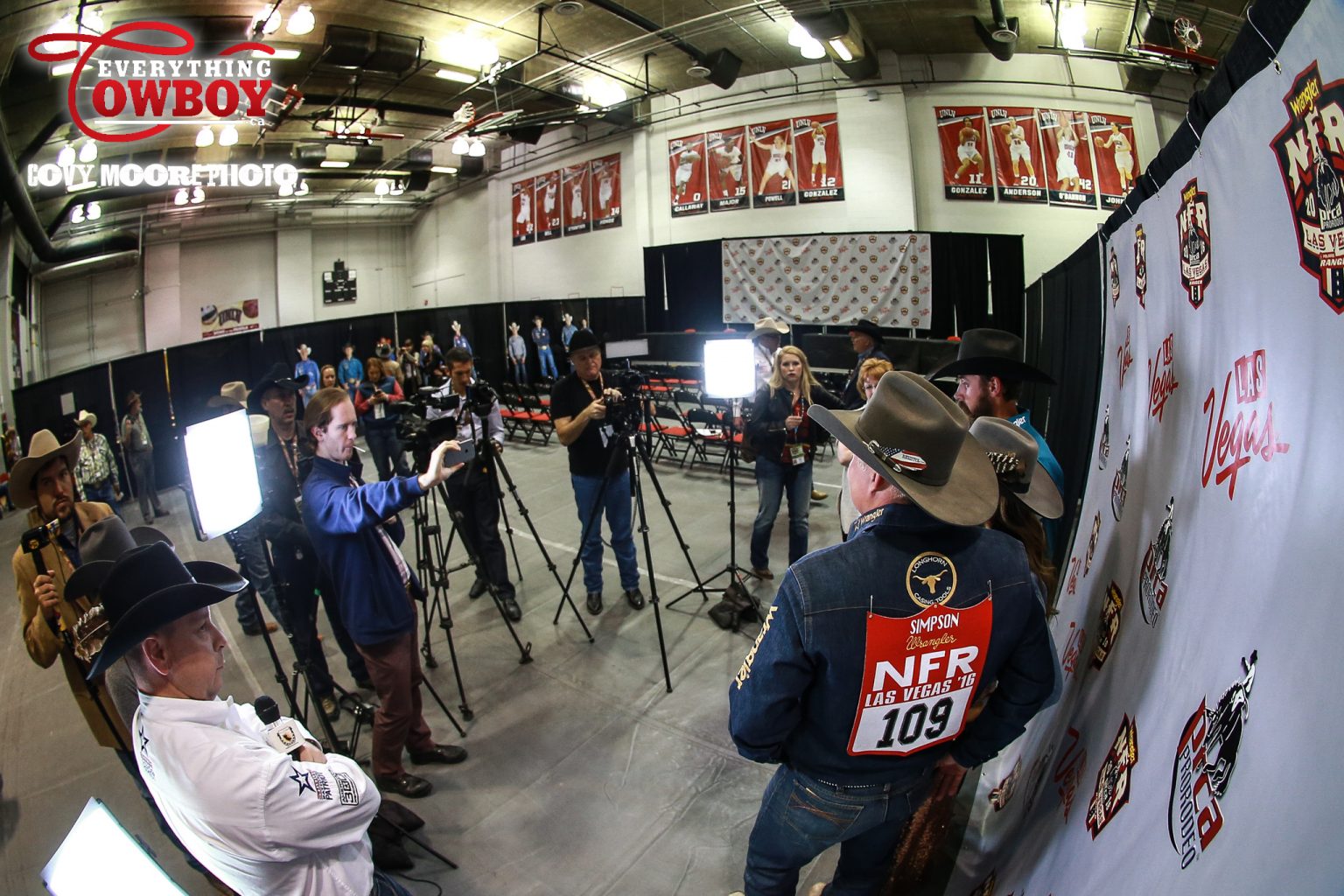 The calm before the storm. This is the quietest that room was the entire night. After some Canadian’s went and won the title, it became one hell of a party. 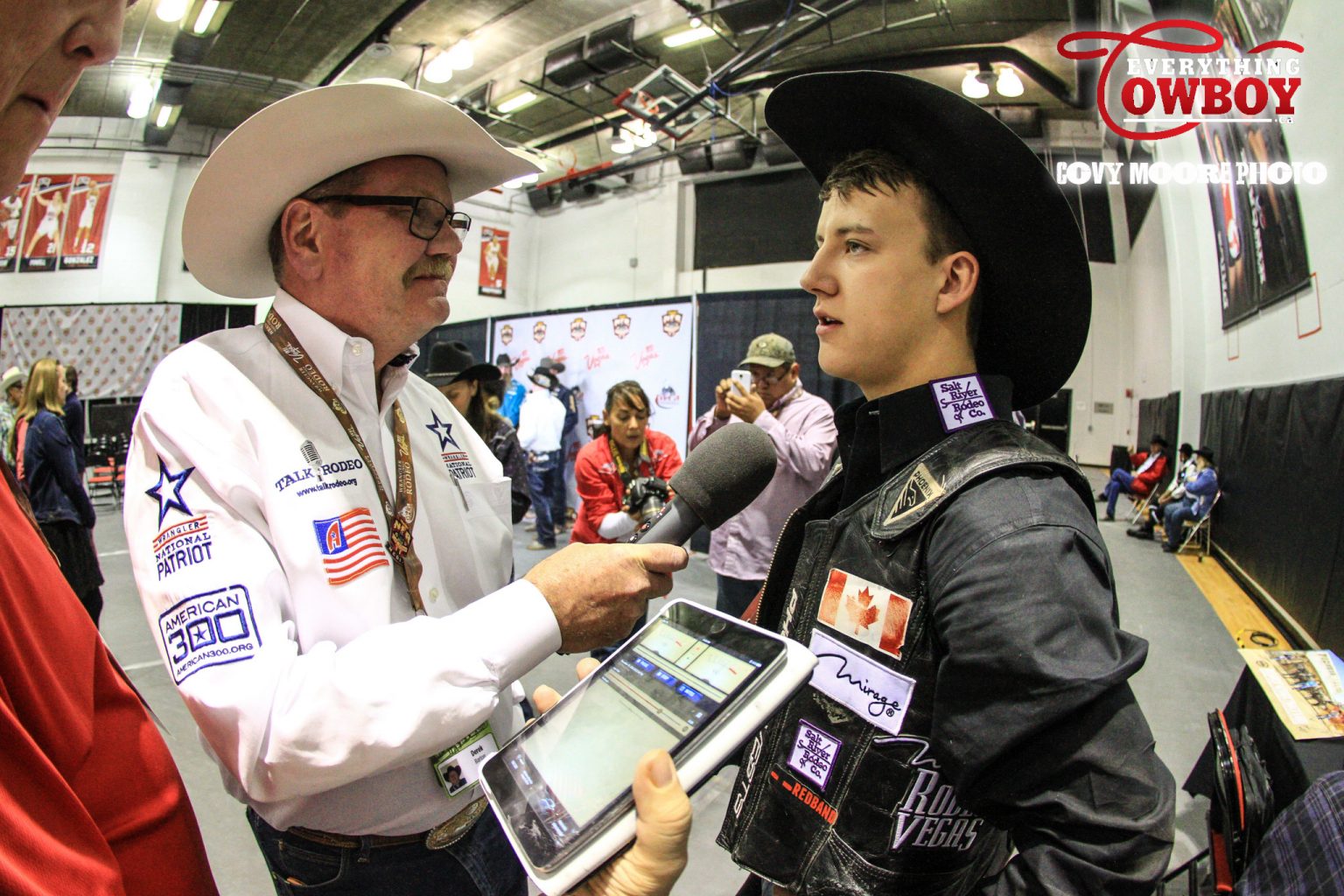 The emotional exterior of Zeke Thurston was pretty rigid. He was obviously elated at winning the world, as the work that goes into this achievement is huge…but I think Zeke was waiting for a few people before he broke down and appreciated the levity of what had occurred. 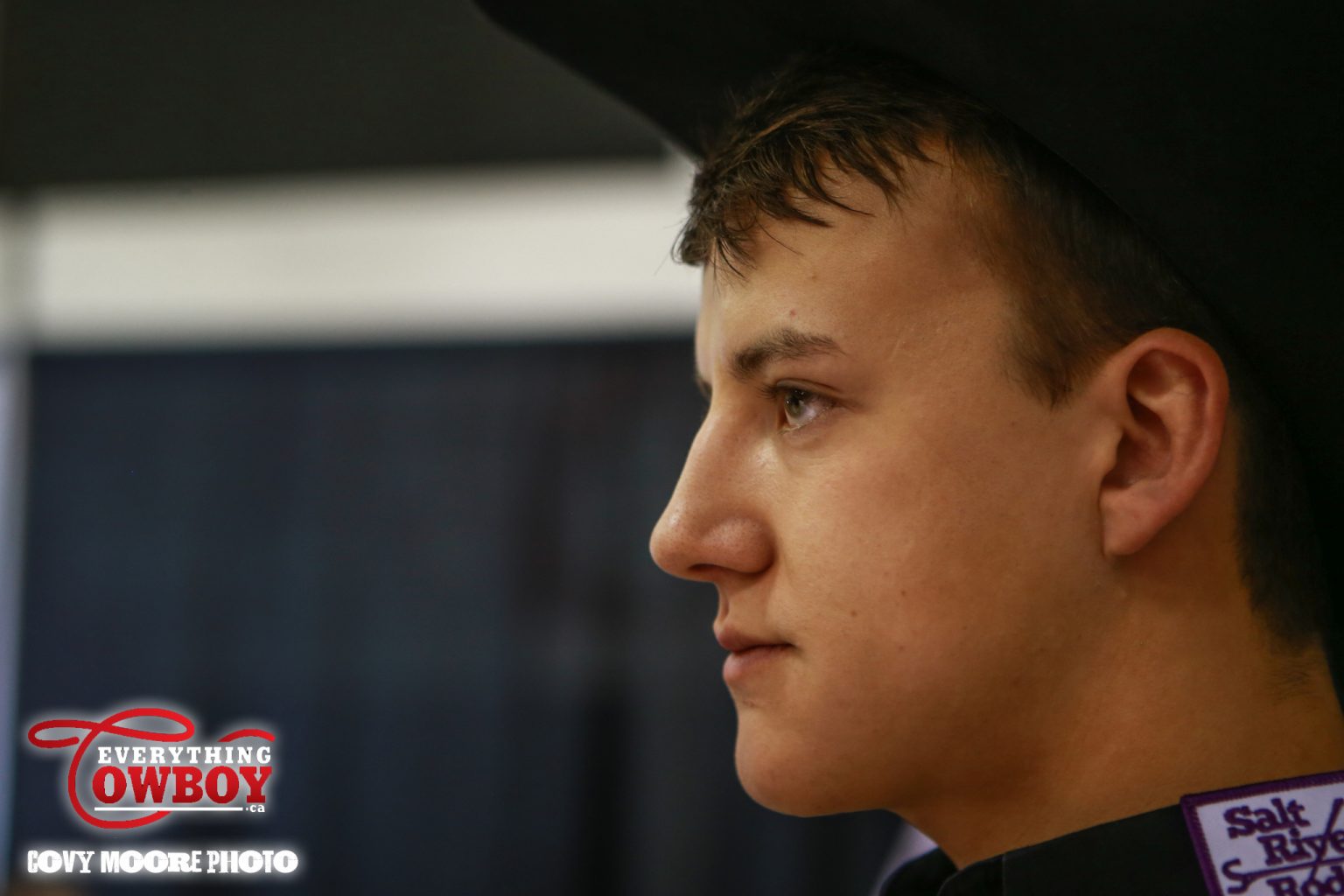 Zeke Thurston, the 2016 Saddle Bronc Riding World Champion speaks to the media after winning the title at the Thomas and Mack Centre in Las Vegas NV. 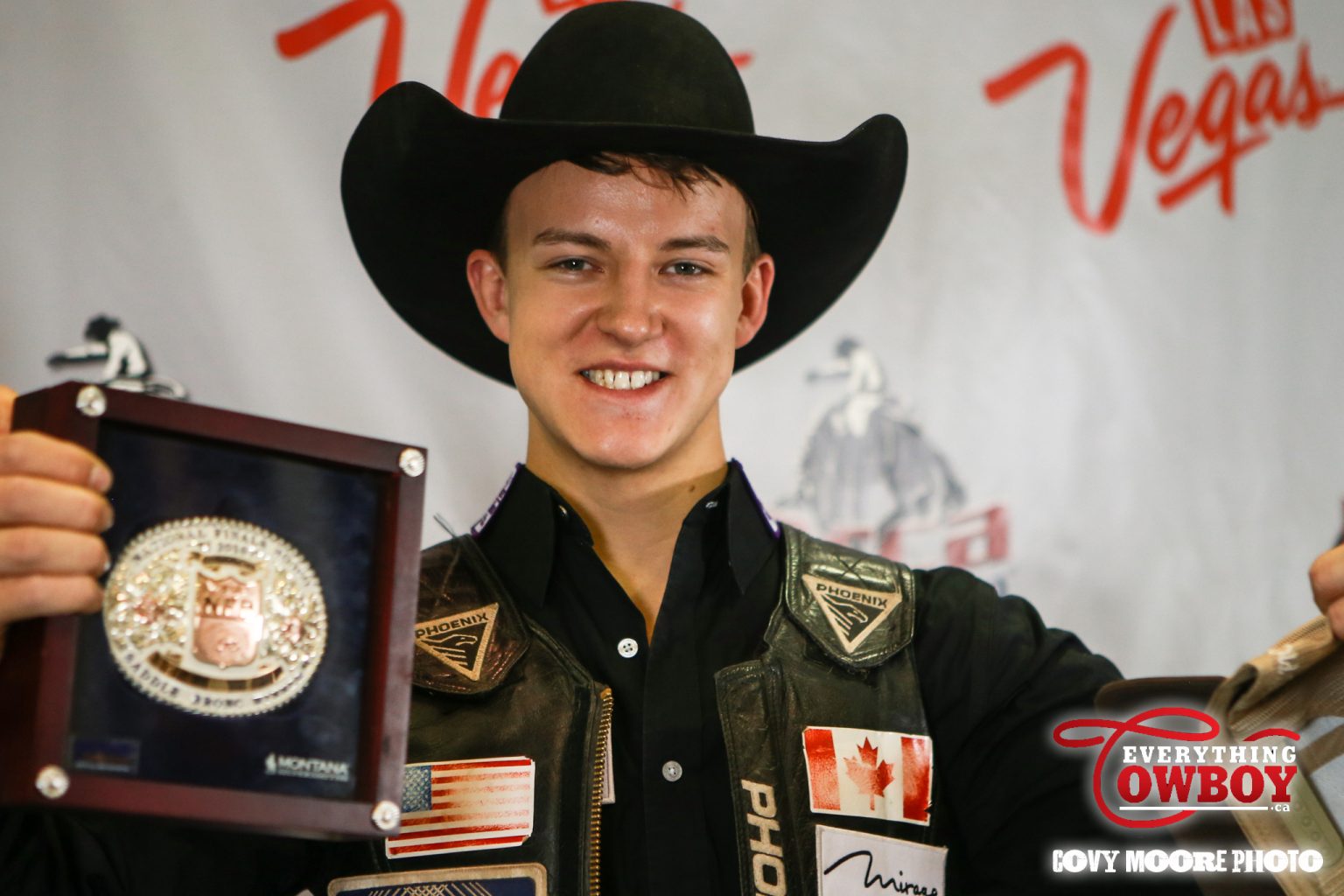 The guy hadn’t even collected his World Title buckle before starting to ham it up for the camera. But it didn’t take long for the many miles, injuries, time away from family to come pouring out in the form of emotion. 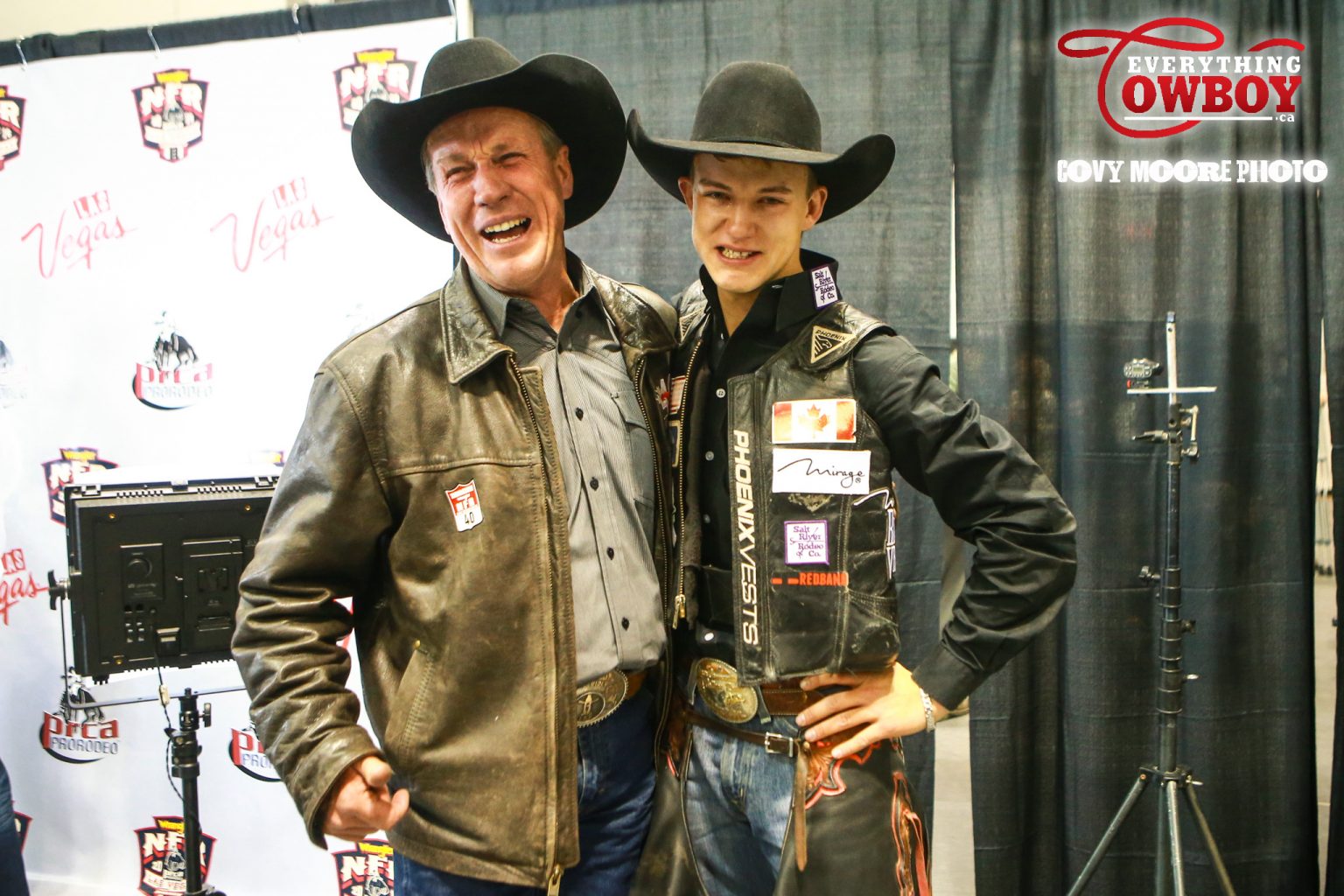 And that is when his father, Skeeter, who rode broncs himself joined him. I don’t know the Thurston clan, but the excitement coming out of that man’s voice was contagious. 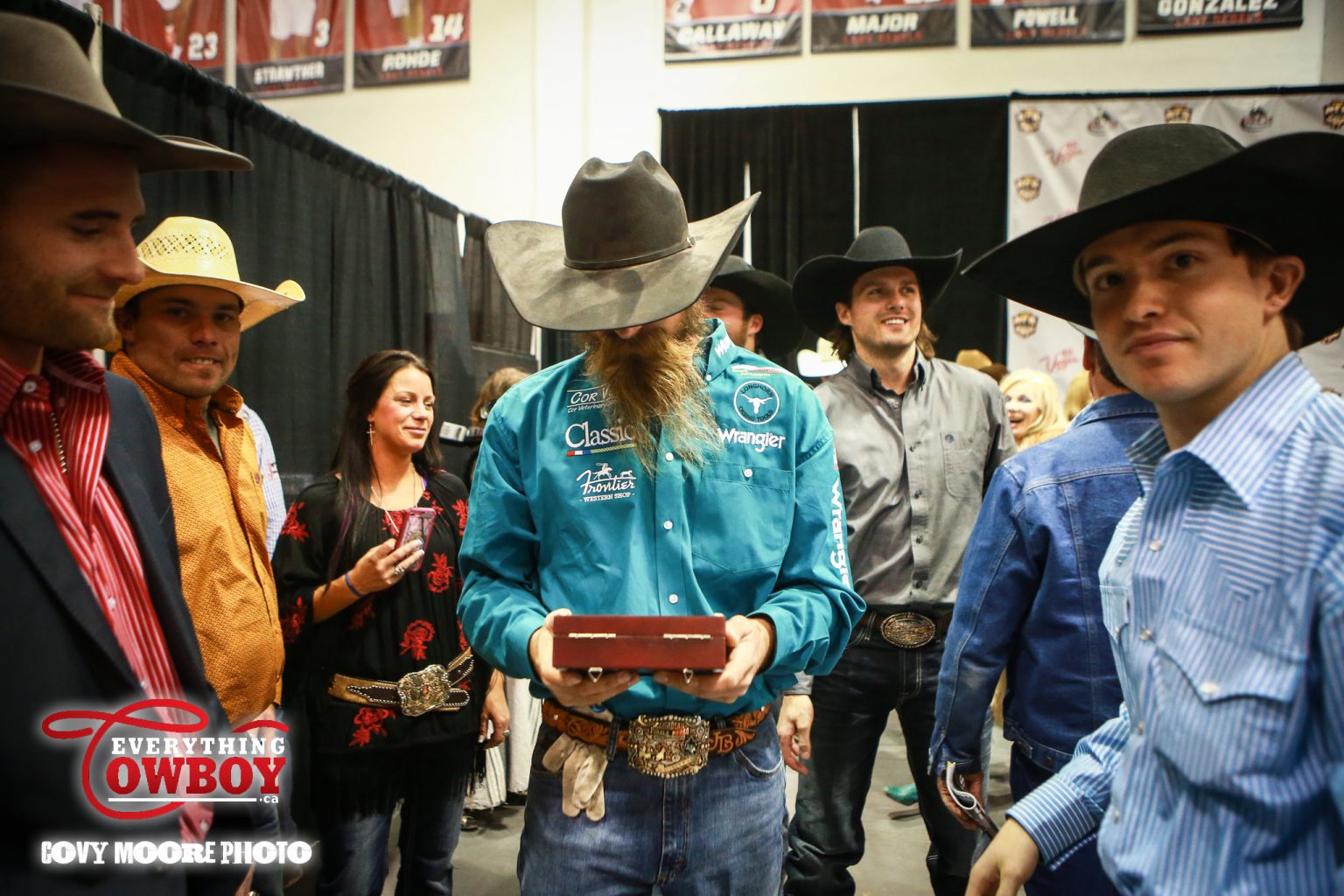 I know that most cowboy are humble. And sometimes being able to hide beneath the brim of a hat is good on the bad days, but even on the best of days when someone like Jeremy Buhler cannot keep his eyes off of the gold buckle it speaks volumes. 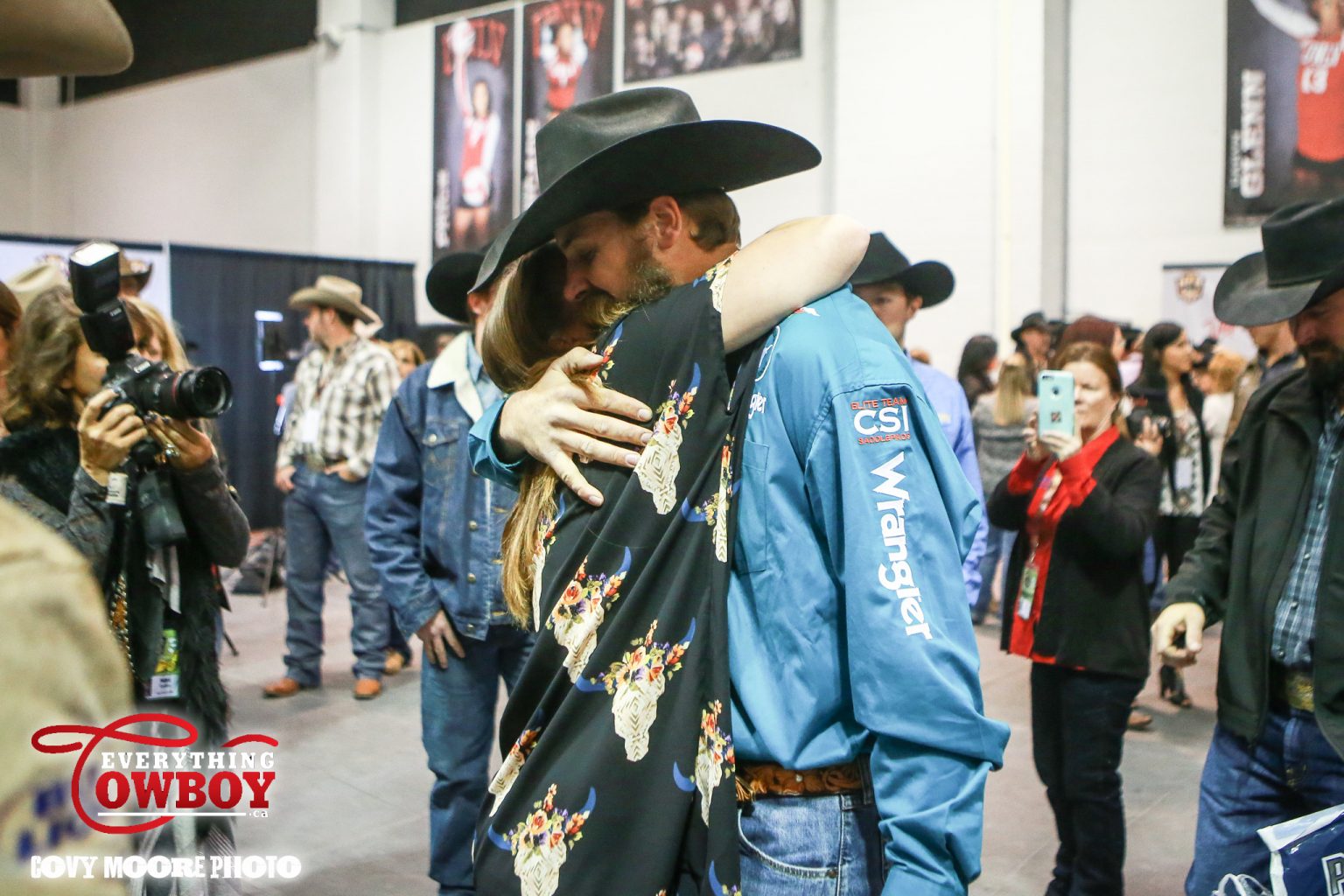 But even the toughest of cowboys are human too… 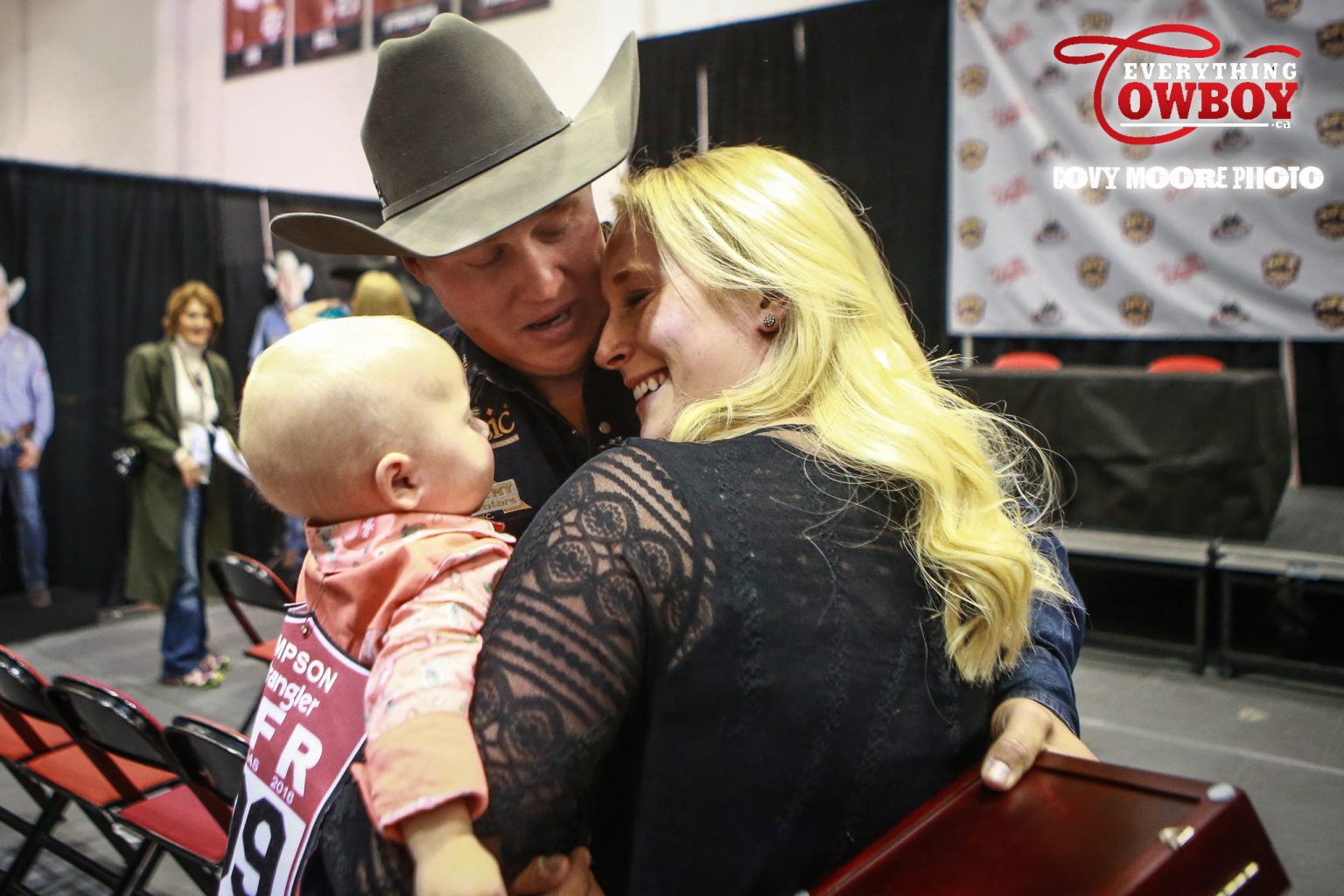 The images, and celebrations cannot get much better than this…. 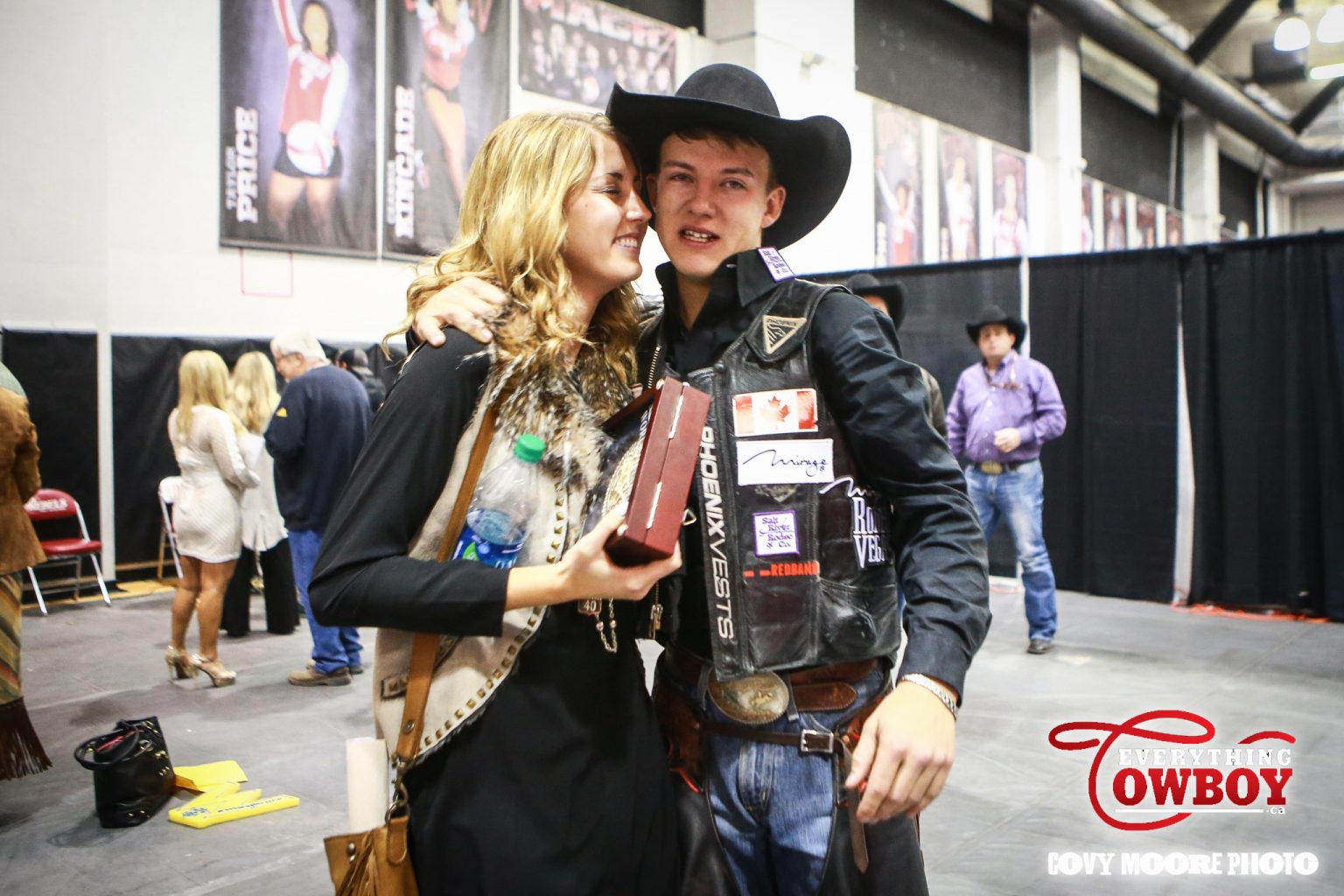 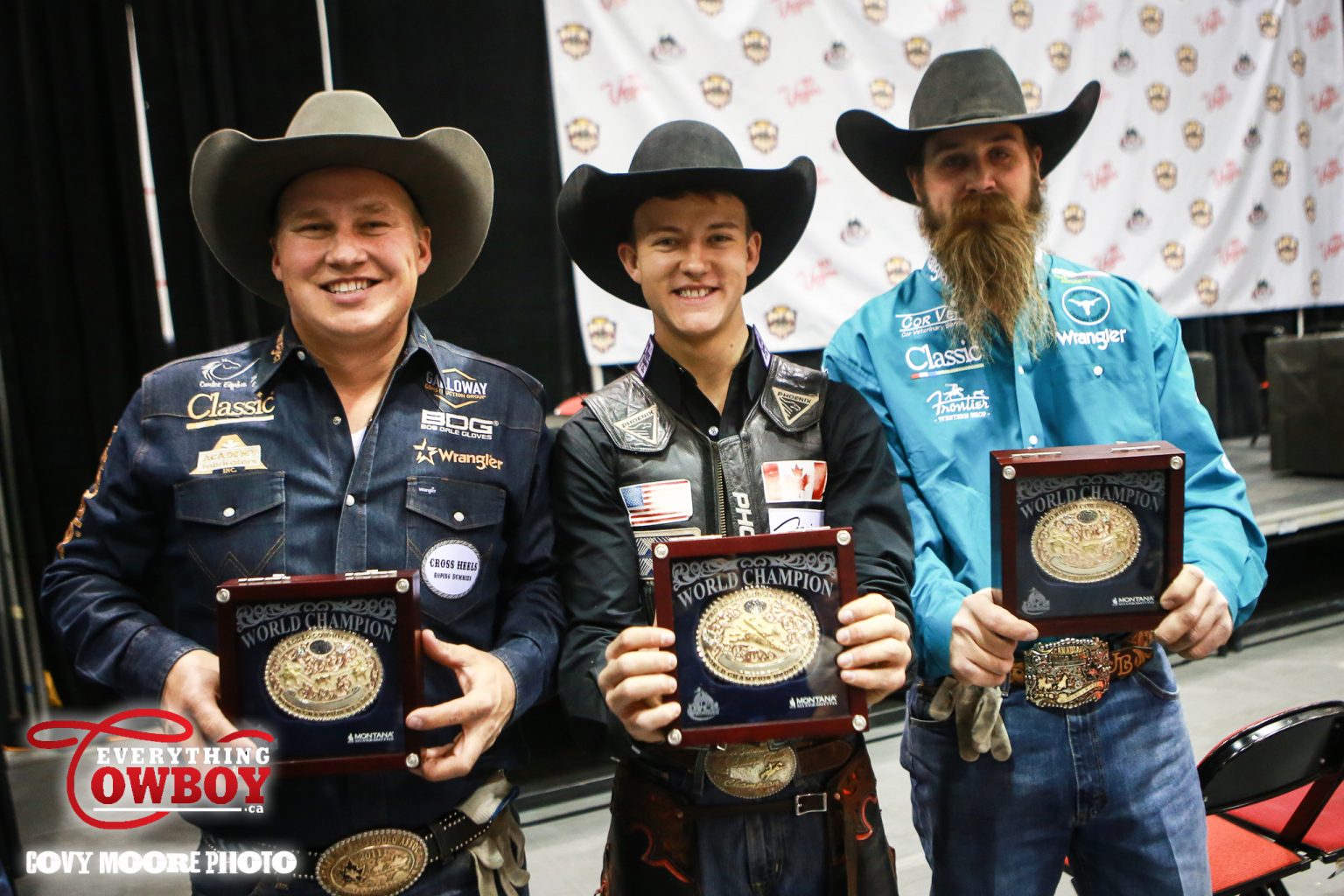 So with that, I put a wrap on my 2016 rodeoing season. It started with “The Chad,” in Claresholm many months ago. It saw 116 rodeo/bull riding/school performances, more than 50,000km, round wins, injuries (to the cowboys and myself), a couple passion filled conversations with good friends and soon to be friends. It had all the ups and downs this sport has to offer. I want to be a part of this sport to tell a story. And the story couldn’t be any more human, any more emotional and any more exciting that what I have witnessed in Las Vegas in the past month. Three PRCA champions, a whole bunch of CPRA and PBR Canada champions, and the rebirth of a bull riding career in Ty Pozzobon. I am excited as heck to know that I get to hit the road again in 2017. And maybe I will just have to find a way to get deeper into the lives of the men and women who love this sport even more than I do, to be able to continue to tell the human story that is rodeo. Congrats boys. Thanks for letting me be a part of telling your story.